Lois Kroehler’s passion for the Cuban people, music and mission will live on 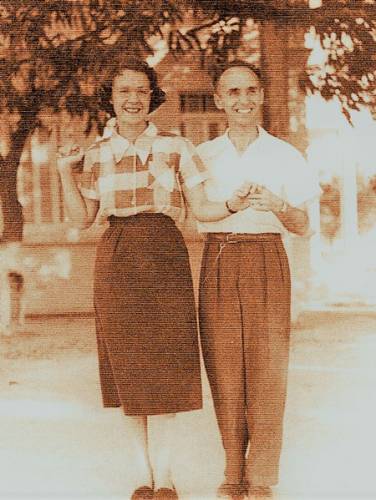 Shortly after her arrival in Cuba, a 20-something Lois Kroehler did a folk dance with ‘El Maestro’ the Rev. Dr. René Castellanos, a Cuban theologian and master folk dance artist who taught for more than four decades at the Evangelical Theological Seminary in Matanzas. (Contributed photo)

LOUISVILLE — As a recent graduate of the University of Nebraska in 1949, Lois Kroehler heard about a short-term opportunity to travel to Cuba to work as an English language secretary for a Cuban church executive. She had planned to teach Spanish after college and reasoned that a couple years of translation work would improve her Spanish, particularly grammar and vocabulary.

“After those two years, the Cuban church invited me to stay,” Kroehler said in a 1998 interview with Democracy Now!, an independent nonprofit news organization in Washington, D.C. “So, I actually became a missionary at the invitation of the Cuban church.”

Instead of the two years she had in mind, Kroehler stayed in Cuba nearly half a century. She taught English at La Progresiva, a school in Cárdenas. It was there she learned that Roman Catholics would cross the street rather than walk past a Presbyterian-affiliated school. They’d been taught that Protestants were the devil and that they should not send their children to school there. 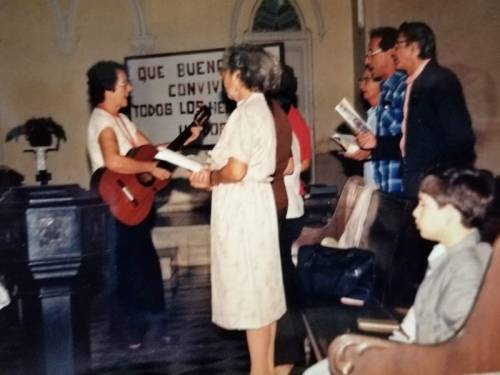 Kroehler played both guitar and piano. She came from a large family of missionaries, pastors and musicians. (Photo by David P. Young)

“Growing up in the Presbyterian Church in Cuba, I sang in the children’s choir in my native Cárdenas,” wrote Magdalena I. Garcia, a Presbyterian Church (U.S.A.) pastor and a hospice chaplain for Vitas Healthcare in Chicago, in a 2017 Presbyterians Today blog. “We were trained by Lois Kroehler, a talented music teacher and missionary. Lois, one of the saints who nurtured my faith as a child, helped us prepare our voices with fun songs, hymns and her own compositions. One of my favorite Christmas hymns was ‘Nuevas de gozo y solaz’ (‘Tidings of Comfort and Joy’), an English carol that we memorized, with different children assigned stanzas as soloists. Just like the psalmist, we learned to sing out the ‘glad news of deliverance’ despite life’s ongoing trials.”

Kroehler worked as a music teacher and choir director with the Christian education team at the Evangelical Theological Seminary in Matanzas, which was founded in 1946 by Methodists, Episcopalians and Presbyterians. It remains the only ecumenical seminary in Cuba and serves more than 400 students annually. She was also one of the leaders and ruling elders of Juan G. Hall Reformed Presbyterian Church in Cárdenas.

Kroehler may have been the only, or at least among the few, mission workers to remain after the Cuban Revolution of 1959. She often told people she was born, politically, on Jan. 1, 1959, the day Fulgencio Batista was forced out of power by a Fidel Castro-led revolution. Although the church alerted mission workers and advised them to leave Cuba at that time, Kroehler not only chose to stay but to become a commissioned church worker, focusing on Christian education and organizing national retreats and events for children and youth.

She said she analyzed what was going on in society and the church in terms of what she was seeing, feeling and experiencing. Over the years, when people would ask how things were going during her occasional visits to the U.S., she would say, “Christ is alive in Cuba,” which she said would elicit reactions of surprise, skepticism, suspicion or responses that were hopeful, joyful and thankful. 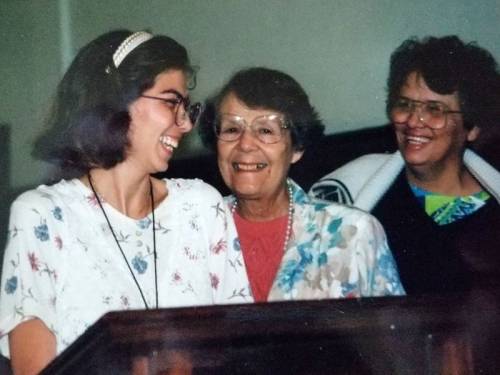 Lois Kroehler, center, served the majority of her life in Cuba. (Photo by David P. Young)

“I remember meeting Lois in the early 1990s,” said the Rev. Dr. David Gambrell, associate for worship in Theology, Formation and Evangelism. “I remember clearly that her passion for music and mission made a big impression on me. I ended up pursuing both paths — first as a Young Adult Volunteer and eventually as a hymn writer — so I have thought of her often over the years. I still sing one of the songs she taught us, all those years ago: ‘Vengan, vengan todos. Vengan, levantémonos. Edifiquemos juntos, edifiquemos juntos, edifiquemos juntos.’ I give thanks and praise to God for her life, service, and witness — and her call to ‘rise and build together.’”

Dean Lewis, founder and executive secretary of the Presbyterian Cuba Connection (1996-2018) and former General Assembly director of the Council on Church and Society, and his wife, Marianne, worked with Kroehler through the Presbyterian Cuba Connection and the Cuba Partners Network. “We were privileged to support the editing and publication of a collection of those precious memories, including the hilarious account of hoisting Lois’ precious piano to her second-floor apartment in Cárdenas!” Lewis said. “Her infectious optimism and constant patience, as she suffered the series of crises with the melanoma that finally put her in a wheelchair and forced an end to her annual visits to her beloved Cuba, was an inspiration and a carrier of grace. In our last visit to her in Bremerton, Washington, Marianne and I marveled at the ingenious ways she had improvised to manage her solo life in her tidy apartment. Her memory and her music live on in Cuba and in the hearts of all who loved the faithful ‘missionary who stayed in Cuba.’”

For her extraordinary and long-term commitment to the people of Cuba and to U.S.-Cuba relations, Kroehler received the Peace Seekers Award from the Presbyterian Peace Fellowship in June 2000. Accepting the award during the PPF’s Peace Breakfast, she referred to peacebuilding as “the work of peace that the Prince of Peace does through us.” She was very concerned about the U.S. trade embargo on Cuba and its impact on the Cuban economy and the Cuban people, particularly access to food and medicine.

At the event, Kroehler shared a story about a visit that she and the Rev. Jesse Jackson made to Cuban President Fidel Castro. Through a government translator, Jackson prayed that a healing Balm of Gilead might be provided for Cuba. The translator thought he’d heard that God might deliver a “bomb” to the island nation. Castro, Kroehler reported, nearly swallowed his cigar.

Kroehler wrote and published many Christian hymns to be sung in English and Spanish. She also helped her seminary students by writing music to accompany their lyrics. The Rev. José Luis Casal, director of Presbyterian World Mission, said Kroehler wrote the music to about 40 of the more than 80 hymns he has composed, with each hymn taking two to four days or longer. He said he can read music thanks to Kroehler. He also sang under her direction in the seminary’s choir.

“I had the music in my mind,” Casal said, “and she was sitting at my side at the piano, or sometimes with a guitar, putting in the notes as I sang the melody for her. I will always remember that, and I will be grateful and thankful for the life and the impact of Lois Kroehler in my life.”

She also wrote and published “many, many, many hymns” for the church to be sung in English and Spanish, Casal said.

“Lois lived a life of dedication,” Casal said. “Her commitment was special because, being one of the few Americans to stay in Cuba after the revolution, she became a person who understood the whole process of the revolution in Cuba. She did it in a time of challenges, in a time of difficult situations in the national setting in Cuba. She was there during the Cuban Missile Crisis. She was there during the most difficult times for Cuba in its relations with the United States. And, she remained faithful and loyal to the church, working with the church at a time when it really was not easy.

“For me, she is one of the heroes — not only heroes in mission work, she is a hero in Cuba-U.S. relations. If, in the future, we have to write the history of Cuba-U.S. relations, I am sure that the name of Lois Kroehler will have to be in that narrative.” 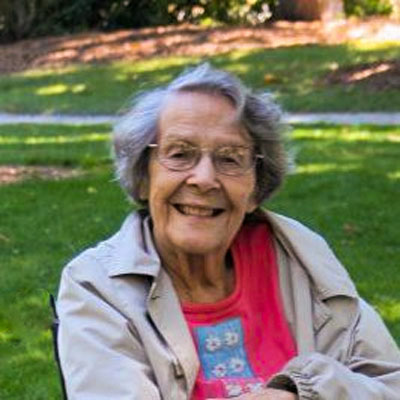 Lois C. Kroehler served in Cuba as a Presbyterian mission worker, music teacher, hymn composer and advocate for peace for more than 40 years. She died Aug. 4 at age 91. (Photo provided)

The Rev. Dora Ester Arce-Valentín, pastor of Luyanó Presbyterian Church in Havana, Cuba, wrote about Kroehler’s passing on her Facebook page: “May God embrace you and whisper to you the best music there is! We can never thank you for so much love, so much commitment, so much talent put at the service of the Cuban church, the one you adopted as yours. Rest in the light of your Lord and God, sister! Here we will get used to continue walking without your presence, physically far away in recent years, but ever-present in each song that you arranged or composed or translated. Thank you infinitely to God for giving us the privilege of having you for so many years among us!”

This is a link to the finding aid for the Estela and Ernesto Bravo Film and Video Collection (TAM.616), housed at New York University Special Collections as part of the Tamiment Library collection. Click on the link, and in the left column under “Table of Contents,” “Container List,” “Series I: Americans in Cuba, Those Who Came,” you will find four video interviews from May 1988 with Lois Kroehler, singing, playing guitar, teaching and sharing from her heart. Although the library does not hold the copyright to these professional, documentary videos, they are available for public viewing through this link.

Listen to part of a speech given by Fidel Castro in September 1996 in Harlem on the topic of religion in Cuba. In 1998 Democracy Now! interviewed, the very Reverend Pablo Oden Marichal, an Episcopal priest and then national coordinator for the Cuban Council of Churches and the late Lois Kroehler, long-time Presbyterian mission worker in Cárdenas, Cuba. Marichal’s interview begins at about 11:38 of the podcast, and Kroehler’s interview begins at about 17:17.