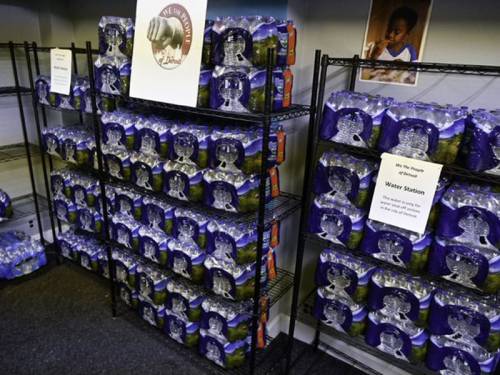 DETROIT — In 2013, We the People of Detroit went to work addressing the immediate needs of residents who had their water shut off, often for dubious reasons, in the midst of the Motor City’s historic bankruptcy.

Leaders such as Monica Lewis-Patrick and Debra Taylor were digging into their own pockets to buy water and deliver it out of the backs of their cars — sometimes recruiting neighborhood youth with reputations for making trouble to carry the loads up more than a dozen flights of stairs.

“This man, he would say, ‘Monica, you don’t have to worry. Peanut is going to bring me my water,’” Lewis-Patrick says, recalling some of the once-adversarial relationships that were changed in that time. “Delivering small cases of water to people in need of a flowing system of infrastructure in their homes is really a lifeline of love. We know it’s not going to meet all of their needs, but for many people to find somebody cared enough to provide this lifeline at a critical point where they had no other resources and nowhere else to go becomes an amazing opportunity to build relationships and rebuild community.” 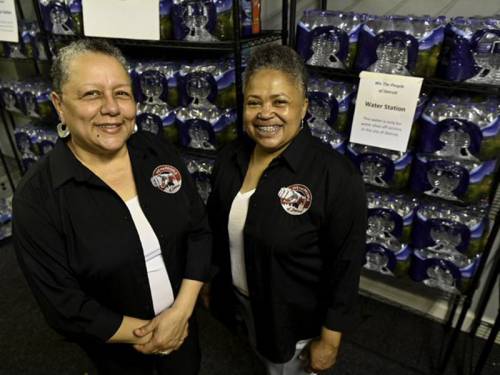 Monica Lewis-Patrick and Debra Taylor are founders of We the People of Detroit, a water justice program that received funding from the Presbyterian Committee on the Self-Development of People in its formative days. They were photographed in the water storage room at WPD’s headquarters on June 28, 2019. (Photo by Rich Copley)

But it was hard to sustain. Lewis-Patrick, Taylor, and others had been laid off by the city’s emergency managers from their jobs with the Detroit City Council, where they had built expertise on water and community issues. They were scrambling to hold the service together, “squatting” in office space in a Detroit building housing community services.

One of their neighbors, Lisa Leverette of the Community Connections Grant Program, told them they needed to apply for a grant with the Presbyterian Committee on the Self-Development of People (SDOP) — and told them, and told them.

“It was just a few days before the deadline, and she came in and said, ‘I need you to take this seriously,’” Taylor said of Leverette, who has been an SDOP National Committee member.

Scrambling for a few hundred dollars here, a thousand dollars there, the We the People of Detroit people were not holding out a lot of faith in landing a five-figure award from an international grant maker.

“We were just elated because it allowed us to sustain at least the work that we had started, but didn’t have the resources to finish,” Taylor said on a hot summer 2019 afternoon in the organization’s offices in St. Peter’s Episcopal Church in Detroit. “The seed that SDOP planted, it has blossomed into something beyond even what we would have imagined.” 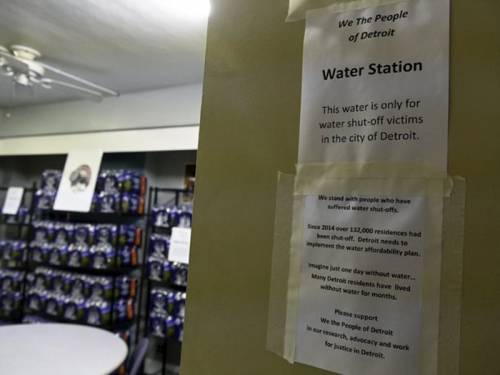 While providing water to residents remains part of the group’s mission, it has evolved into broader advocacy including a youth-training program, extensive research starting with the 2016 publication of “Mapping the Water Crisis: The Dismantling of African-American Neighborhoods in Detroit,” seats on international boards, and a growing voice in national water and social justice concerns.

And it is a voice that was prepared to speak when the COVID-19 pandemic brought Detroit’s water and inequality issues back into stark relief.

“The research and advocacy of We the People of Detroit illustrate the absolute importance of their work in the face of a double pandemic of both poverty and COVID-19,” the Rev. Dr. Alonzo Johnson, coordinator of SDOP, said Wednesday. “Produced with and for the citizens of Detroit, their work was integral in providing a comprehensive understanding about the impact of water shut-offs on low-income families and overall residential water quality. Used in a wide range of settings, WPD’s painstaking work of community organizing, advocacy, legal and legislative work is integral to the health and safety of Detroit communities.” 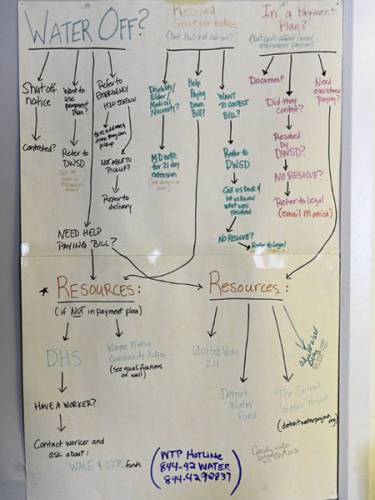 A sign in the office of We the People of Detroit shows steps to resolve water shut off issues. (Photo by Rich Copley)

“SDOP is blessed to be able to have an important partnership with an incredible and essential group,” Johnson said.

That partnership was possible in part because of One Great Hour of Sharing, the special offering that supports SDOP as well as Presbyterian Disaster Assistance and the Presbyterian Hunger Program.

As the COVID-19 pandemic developed, We the People of Detroit raised an obvious question: How are people supposed to fight coronavirus if they can’t wash their hands?

As the crisis unfolded, We the People of Detroit supported and organized water distribution while calling for an end to water shut offs and restoration of water during the crisis, a demand Michigan Gov. Gretchen Whitmer eventually agreed to.

“This bold act, as we deal with a global health crisis, highlights the ongoing danger to public health caused by depriving access to a basic human need — clean water,” Lewis-Patrick wrote in a post on the group’s Facebook page. “Moving forward, we must hold the public water suppliers and the municipalities accountable for holding up their end of the bargain. They must report the number of homes in their jurisdictions that do not have water and the rate at which water is restored. We are all in this fight against COVID-19 together, and we must act fast to protect our communities.”

It is the sort of accountability We the People of Detroit has been demanding for nearly a decade facing down governments and private entities they see manipulating and skirting laws to gain wealth and control. Taylor spent time involved in the Flint water crisis, which also unfolded under emergency management.

Since those days scrambling to get water to people facing hot summer days with dry taps, We the People of Detroit has spearheaded scientific and demographic research, illustrating the parallels between water deprivation and race, poor health, and other inequities. The program has taken a particular interest in youth with We the Youth of Detroit, spurring interest in science and justice that has led some former students into college and even post-graduate work in water issues. 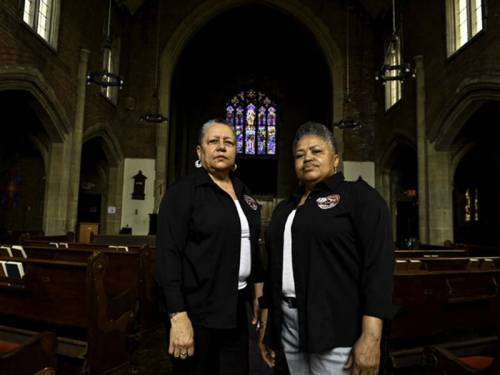 Monica Lewis-Patrick and Debra Taylor are founders of We the People of Detroit, a water justice program that received funding from the Presbyterian Committee on the Self-Development of People in its formative days. They were photographed in the sanctuary of St. Peter’s Episcopal Church in Detroit where WPD’s has its headquarters, on June 28, 2019. (Photo by Rich Copley)

Lewis-Patrick and Taylor say a lot of it is attributable to Self-Development of People’s faith in the group, which helped give it credibility with other donors who helped expand We the People’s work and influence.

“I don’t think we can ever talk about where we are now without mentioning SDOP,” Lewis-Patrick said in the We the People of Detroit offices, which retain that scrappy, not-for-profit feel.

“Through this lens of multi-racial collaboration, and advocating under the lens of humanity, it allows us to find a place for everybody to come in, and everybody to be served and cared for. And to us, that’s exactly what Christ compelled us to do. He said, ‘When I was thirsty, you gave me something to drink; I was hungry, and you fed me.”