Building a Life of Faith. Support the Pentecost Offering.
Make A Donation Click Here >
Home › Belize’s top agriculture official pays tribute to the Presbyterian Committee on the Self-Development of People 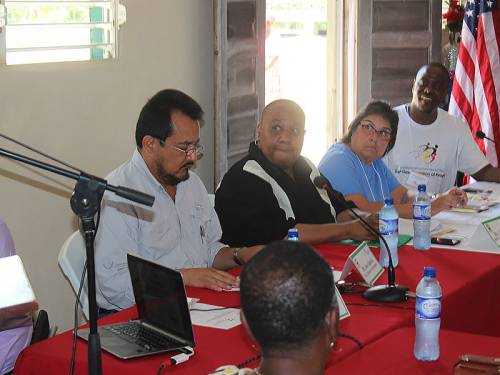 Jose Alpuche, CEO of the Belize Ministry of Agriculture (in glasses), attends a ceremony celebrating the Sandy Beach Women’s Cooperative at SDOP. Photo by Rick Jones

LOUISVILLE – Workers were busy Thursday morning at the Sandy Beach Women’s Cooperative in Hopkins Village, a coastal community in southeastern Belize. This was a big day, not only for the women-owned and operated restaurant, but for the country’s Departments of Agriculture and Cooperatives. The top official was paying a visit to meet with members of the Presbyterian Committee on the Self-Development of People.

Employees with the cooperative say it is very rare for a national government official to meet with a faith-based organization like SDOP, but this time was different. SDOP has provided more than $260,000 in grant funding over the past six years to help communities build self-sustaining businesses and an economic base. It is something agriculture officials have been happy to see and participate in.

“The partnership with SDOP has been one that has had a level of commitment like none other,” said Lisa Leverette, chair of SDOP’s international committee. “Both sides were skeptical, one was a government agency and the other was a faith group. But this has been the most open, transparent partnership I’ve ever been involved with.”

Leverette says it is a rarity for a country’s department of cooperatives to work with grassroots people and see them as economic contributors to society.

More than 35 people showed up at the Sandy Beach restaurant and meeting center to meet with SDOP members and hear from Agriculture CEO Jose Alpuche.  A banner over the speakers’ table read “The unlikely collaboration of a Belizean Government Department and a U.S. Faith Based Mission Program.” Alpuche described their first encounter with SDOP as one of skepticism. 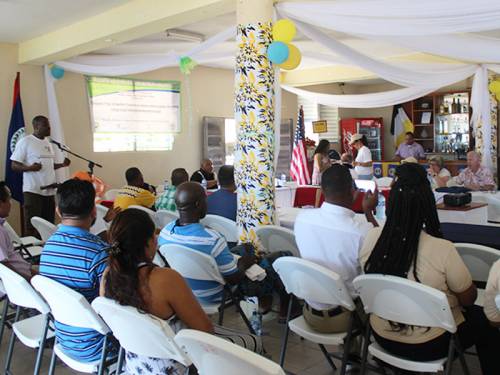 “We were very surprised by what you have achieved. A lot of organizations have come in saying they want to help, but end up leveraging that help to make more money for themselves and we have too much of that,” said Alpuche. “Your name is the core of what we try to do in Belize. You are helping those who help themselves. You have to have some skin in the game for you to take the help you are getting seriously.”

Alpuche says he hopes the partnership will continue.

“We are trying to transform the work we are doing to move away from people expecting continuous handouts,” he said. “We are trying to push micro-cooperatives and small farmers into a business model that is socially responsible and push them as close to the market as possible because that’s when they get the full benefit of their sweat equity.”

“Our primary function is to regulate corporate enterprises, ensuring they meet qualifications. We also engage in business development activities, such as training for entrepreneurs,” said Gareth Murillo, with the country’s Department of Cooperatives. “SDOP has complimented what we do with capital and these new businesses can apply. It has been a great collaboration.”

Merlene Castillo has been chairwoman of Sandy Beach for 15 years and helped bring the business together. 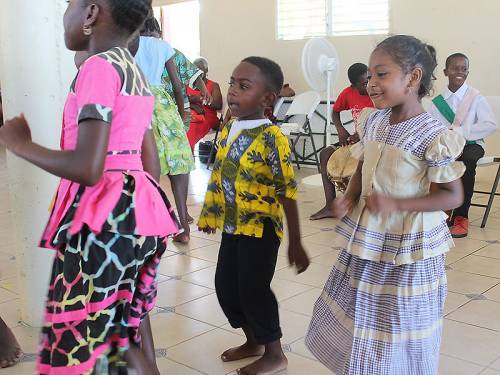 Children from a Hopkins Village school end the day of celebration by performing for SDOP committee members. Photo by Rick Jones

“Thanks to the funding and support we’ve received from SDOP and the Department of Cooperatives, we are fully employed again,” she said. “New development and tourism are taking off in our community that has helped us to hire new employees, allowing young people to stay in the village, giving us a future. The people have been waiting for economic opportunities in this community for years and this is one of the largest projects taking place.”

The Department of Cooperatives uses Sandy Beach as a success story when meeting with groups in other remote regions of the country.

“The impact has been great. Everyone talks about it. It’s a great national model that we use across the country. The amount of commitment it takes shows it is possible to work with grassroots groups if you allow them to take the reins,” said Mitchell Louis, senior officer with the Department of Cooperatives. “Sandy Beach has parties, conferences, seminars, big weddings and more. This place is famous now. They have an online presence.”

Agriculture officials say SDOP’s work ethic in Belize has resulted in giving communities the power they need to make their own decisions about their future.

“You have provided significant capital, not by engaging in member control, but by allowing them to set their own path,” said Murillo. “Your grants have gone to infrastructure, development and given these businesses their own identity. There is more participation from co-op members and they in turn, become more active.”

SDOP Coordinator Alonzo Johnson told the group he sees the presence of God in the government/faith group partnership.

“It truly is about people helping people. Every dollar you receive doesn’t come from foundations, but from folks who sit in church and are concerned about changing the world,” he said. “They are giving this money because they are confident the resurrection will be done.”

Chekesha Showers of Montgomery, Alabama, has befriended local community organizers and attended the joint meeting. She credited the women’s cooperative for helping her.

“What a wonderful job you’ve done.  I came in bad health, but this place restored me to my health. This is a strong and significant thing that has happened,” she said. “When individual women step forward and change their lives, I am inspired and motivated to follow in what they’re doing.”

The SDOP committee returned to the U.S. on Friday.