PORTLAND – In an atmosphere permeated with gratitude and punctuated with hope and grace, leaders and educators from across the church gathered for the General Assembly’s Theological Education Awards Breakfast to celebrate two profoundly influential scholars and PC(USA) teaching elders, the Rev. Dr. Katharine Doob Sakenfeld and the Rev. Dr. Craig Dykstra. 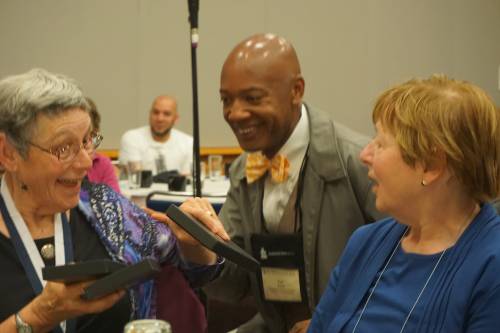 The award was established in 1996 to “honor a person who has made an outstanding lifetime contribution to theological education in and for the PC(USA).”

Sakenfeld was introduced by the Rev. Dr. Charles Wiley, the Presbyterian Mission Agency’s coordinator for Theology and Worship, and the Rev. Dr. M. Craig Barnes, president of Princeton Theological Seminary.

“Katharine Sakenfeld has iconic status at Princeton Theological Seminary,” said Barnes. “She is scholar, teaching elder, pastor to students, and a beloved administrator, two words that seldom go together. Over her four decades of teaching at Princeton, several thousand students benefited from her wisdom, scholarship, insight, and love of the text.”

In accepting her award, Sakenfeld thanked two people, among many, to whom she was particularly grateful, Gardner—“who taught me most of what I know about how to teach”—and her husband Helmar, who persuaded Sakenfeld to interview for the position at Princeton when she thought seminary teaching was definitely not for her.

Thinking about the future of theological education, Sakenfeld said that one of the images that came to her mind was that of the early explorers of the American West. “Routes had to be discovered through unknown territories, often by trial and error, occasionally with dead ends,” she said. “It was certainly a time of moving out into the unknown, a scary time but also an exciting time. It’s a time when our schools are boldly seeking new trails and reinventing themselves in all kinds of ways.”

Sakenfeld concluded by lifting up what she identifies as the common core of the work of theological education, specifically a focus on the whole person—spiritual, moral, physical, and intellectual.

“As we explore new territories and mark new trails, let’s hold on to that common core of our work, and I think, as we do, that as seminaries, we will continue to have graduates who can support the work of the church and God’s work in the world for years to come.”

The second of the COTE’s two honorees, Dykstra, was introduced by the Rev. Carol McDonald, honorably retired executive for the Synod of Lincoln Trails, and the Rev. Dr. Michael Jinkins, president of Louisville Presbyterian Theological Seminary. 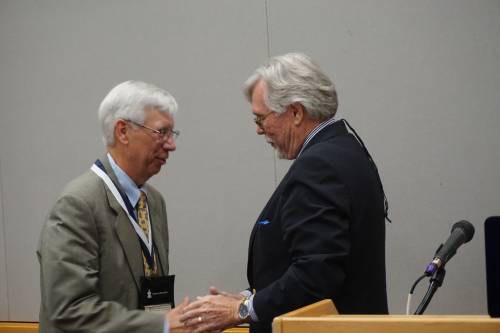 McDonald acknowledged Dykstra’s Growing in the Life of Faith, which she called “a book and a work that has influenced decades of Christian education, giving those of us who claim the name practitioner good solid foundations.”

In his remarks, Jinkins said, “No one has had a greater impact on theological education in our time than Craig Dykstra. It is simply a fact.”

Jinkins highlighted Dykstra’s work in shaping “the very terms of the conversation about how to best prepare men and women for ministry and leadership in the church.”

“Today’s sabbatical and study leave programs that we consider essential for pastoral renewal exist because [Craig] championed them,” Jinkins said. “Programs that promote the vocation of ministry among youth and young adults, programs that seek to sustain pastoral excellence, and programs that nurture church leadership can be found in virtually every corner of this country because of Craig’s vision.”

After expressing his deep gratitude for his colleagues’ affirmation, Dykstra shared his interview experience for the position of vice president for Religion with Lilly some 30 years ago.

Dykstra told Morris that because he had received such a gift, he hoped as many other people as possible could receive it also. “So I went to Lilly Endowment eager to support and encourage the broad endeavor of theological education itself and to make it more accessible, even to youth,” he said. “In no small part because of my own experience, it seemed crucial that there be substantive opportunities for serious theological education for high school students. So we fostered and funded more than 50 theological programs for high school kids on seminary and divinity school campuses all across the country, where more than 25,000 teenagers have studied with seminary faculty, engaged in life-changing conversations with their peers, and have been introduced to the various forms of ministry and service where they were situated.”

“Through the influence of these opportunities, thousands of young people have found their way into pastoral ministry and to other kinds of ministry within the church,” he said. “And many more have become active lay leaders, still reading theology for the sake of their professional life, their civic life, their family life, their church life.”

Dykstra concluded by acknowledging that the institutional challenges facing graduate theological education are daunting, both financially and programmatically.

Quoting Daniel Aleshire, executive director of the Association of Theological Schools, Dykstra noted that there would be more change in the next 20 years of theological education than there have been in the last 100.

“Clearly we live in a season of rapid social, cultural, and religious change that will not end any time soon,” he said. “Under such circumstances it is crucial that we all keep in close conversation with one another, not only within the Presbyterian family but across the entire Christian landscape—and indeed interfaith landscape—so as to learn from one another, and to support one another in the inventiveness and wisdom that is emerging across the land, as we all seek not only to adapt but to thrive.”

COTE is an advocate for theological education, seeking to support seminaries—both financially and in other ways—and to strengthen them for their mission to the whole church. It seeks to identify, develop, and propose strategies for a systemic approach to theological education within the PC(USA). The Theological Education Fund (TEF), which moved from the Presbyterian Mission Agency to the Presbyterian Foundation on January 1, 2015, is the only source of denomination-wide funding for PC(USA) seminaries.