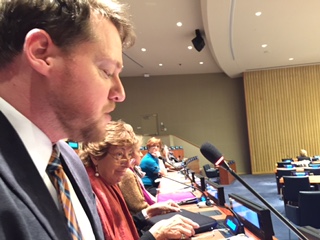 LOUISVILLE – From an early age, Ryan Smith had an interest in the international arena. A graduate of Seton Hall University, he received his masters in Diplomacy and International Relations, focusing on international economics and development and international organizations.

Smith grew up attending Fairview Presbyterian Church in Lake Erie Presbytery and began his career teaching English in Germany as a United States Fulbright Scholar. Upon his return to the U.S., he taught German to the business community and worked with faith-based humanitarian, direct service and advocacy in both New York and Washington, D.C.

“I’m really interested in international cooperation for a better humanity. No system is perfect, but the United Nations is the one global roundtable where representatives from all over the world convene, even if they don’t have independent diplomatic relations,” he said. “The United Nations is a place to bring people together, a place where no matter the politics, the goal is cooperation and peace.”

During his time at Seton Hall, Smith was exposed to the work of the Presbyterian church and its connections with the United Nations.

“I interned for a partner of the PC(USA) and that’s where I first learned that the church I grew up in was even active at the United Nations,” he said. “That experience also exposed me to the important work of faith-based actors advocating within the international community.”

Smith says the surprising thing he’s learned about working with the U.N. is the need for “very real patience.”

“The ability or willingness of governments or U.N. agencies to change global norms and standards does not happen overnight,” he said. “The advocacy work at the United Nations is a long process and the dedication and commitment of the PC(USA) to that work is necessary if we want to see the changes we wish for the world on the global level.”

The most difficult thing about working with the U.N., according to Smith, is the same thing — patience.

“It has been hard for me to be patient, especially in times of war and strife,” he said. “I believe that God calls us to work for peace even when we can’t easily see the answer for how that peace will come to be. It is the trusting in God that helps me when I personally want action and answers today.”

Smith believes working with the United Nations provides the church with an opportunity to join the “halls of power” in providing witness and support to the actions of General Assemblies as well as those of partner churches.

“My favorite opportunities in my position are working with church partners when they have the chance to visit New York and make connections between our partners and governments, including the Security Council and United Nations agencies,” he said.

The Presbyterian Church’s connection to the United Nations goes back to the very beginning, more than 70 years ago. The church holds special consultative status through the UN Economic and Social Council, and has two primary tasks: inspire and equip Presbyterians for global discipleship following Jesus Christ and to advocate for peace and justice based on the policies of the General Assembly of the PC(USA) within the UN community.

“I believe the PC(USA) has an opportunity to strengthen our partnership relations with the U.N. and governments from around the world to serve as an agent for peace,” Smith said. “The Sustainable Development Agenda is just starting to take shape. I believe the church and ecumenical and secular colleagues will play a vital role in how the international community seeks to work on peace and development over the next 10 years or more.”

Smith says it’s been rewarding to see Presbyterians and the Reformed community working together throughout the world.

“I’ve seen the work Presbyterians do to provide emergency housing in areas of war, food and education where the state fails to provide,” he said. “I’ve also seen that the church is in communities before, during and after disaster.”

Smith says it is the commitment to communities that inspires him the most and sets the church apart from other non-governmental organizations working around the world.

Through its accreditation, the church has the opportunity to participate in the different commissions, conferences and high-level events of the United Nations. The ministry at U.N. has been active with the Commission on the Status of Women, the Commission on Social Development, high-level talks on HIV/AIDS, the Paris Climate Talks as well as the U.N. Youth Forum and other events.

Presbyterians interested in engaging with the work of the Presbyterian Ministry at the United Nations can call 212-697-4568.