When she was 11, all Floretta Barbee-Watkins wanted was a Pet Rock 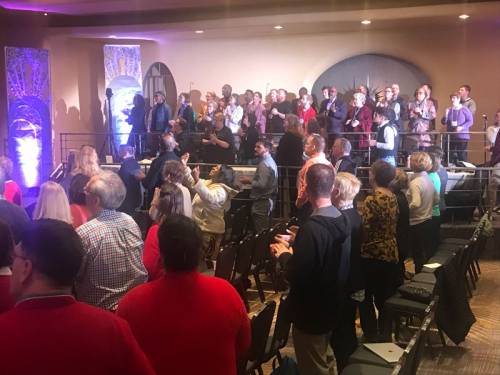 With help from an enthusiastic and talented choir, worshipers sing during worship at the NEXT Church national gathering Tuesday. (Photo by Mike Ferguson)

CINCINNATI — The Rev. Floretta Barbee-Watkins got off to a rocky start during Tuesday worship at the national gathering of NEXT Church.

As an 11-year-old in 1975, all she really wanted was a Pet Rock — one of those smooth stones that were all the rage. The $4 novelty came in a cardboard case complete with breathing holes, straw and a training manual. During the Pet Rock’s six-month heyday, more than one million were sold.

“It was the thing none of my friends had,” said the pastor of The Avenue Presbyterian Church in Charlotte, North Carolina. She told her mother, “I would be one of the cool kids if I had one.”

“I’m not buying that, Floretta,” her mother replied.

The girl decided to start collecting her own rocks. “It wouldn’t come with instructions or come in a box, and it may not be smooth — but it would be mine,” she said. Her collection grew to 12 rocks, “and there was no reason to stop, except my mother saying, ‘Stop bringing rocks into the house, girl.’ I didn’t name my rocks, but they all were washed and baptized.”

Her collection stuck around through high school, college and seminary. “They meant I would be cool,” she said. “To my mother it was just dumb.”

“Now I’m at a more seasoned age,” she said with a smile. “Those stones are about remembering, love, legacy and laughter.” 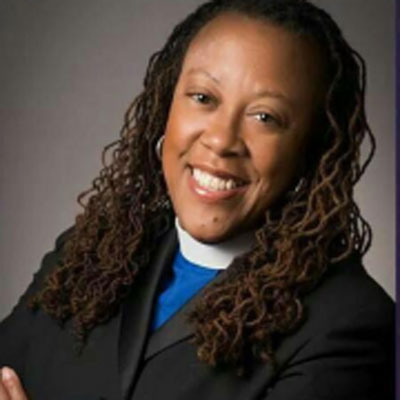 Barbee-Watkins enumerated a number of more traditional and useful uses for rocks — as protective barriers against tides and waves, as ancient altars and as Jacob’s pillow, as the stone (Jesus) that the builders rejected, as tombstones, as a barrier or a boundary, or as a weapon.

Just as Joshua instructed 12 men to gather the stones that had been placed in the Jordan River (in Joshua 4:1-9, the theme of the national gathering), we are called to remember how God keeps God’s promises, Barbee-Watkins said.

“Sometimes you’ve got to go back to the place where you received grace, sometimes to places that caused pain so that amends for wrong can be made, restored and repaired,” she said. “Some call that reparations.”

God’s promises can be delayed, but they’re never denied, she said. After her mother died 12 years ago, Barbee-Watkins found her stones in her old bedroom and threw them into her mother’s back yard — “this sweet woman who would not get me a Pet Rock,” she said. “These rocks were collected by me as I tried to be accepted.”

“Today I carry stones around in my pocket,” she said, holding up a small bag of them. “They ground me in my faithfulness to God and the love and grace God extends to me through God’s son Jesus Christ. Thanks be to God!”