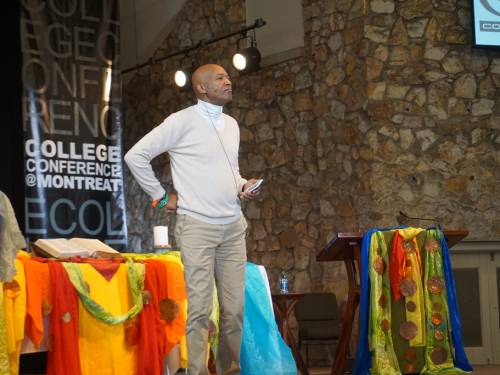 MONTREAT – Stepping again into the pulpit—and alternately striding across the stage—at the College Conference at Montreat on Jan. 3 and Jan. 4, the Rev. Paul Roberts Sr., president of Johnson C. Smith Theological Seminary, Atlanta, Georgia, continued to explore the conference theme, “Beyond Babel,” based on Genesis 11:1-9.

The 2017 conference, at which over 1,000 college students and their advisors are gathered from Jan. 2–5, is designed to help participants see in the ancient biblical text “how God gave an ancient people a holy nudge towards diversity,” while at the same time challenging them to consider how God is similarly nudging God’s people today.

Building on several key points from his opening sermon of the previous evening—especially the human tendency to be “territorial and exclusionary”—Roberts preached Jan. 3 on two New Testament texts, Matthew 19:13-15 and John 4:1-15, the Samaritan woman.

Roberts began his sermon entitled, “Whose Lane Is It Anyway,” with a story about a recent, rush-hour Atlanta traffic adventure, where he said his fellow travelers seemed to be sending him a message “telling me to stay in my lane and stay out of theirs.” He then immediately segued to a related illustration from the Disney film, “Finding Nemo.”

“There’s a set of characters that I have in mind right now, the seagulls,” Roberts said, as conference-goers anticipated—and then mimicked—the seagulls’ memorable chant, “Mine, mine.”

“The seagulls in the film travel together, but they’re not all the same,” he continued, “and every time there is an opportunity, or a morsel of food, everyone is out for him or herself saying, ‘Mine.’ It’s the only word in their vocabulary. Sometimes I think it’s too prominent a word in your and my vocabulary.”

Reflecting on how such a tendency toward territoriality can play out politically, Roberts cited recent U.S. Census data indicating the nation’s growing diversity toward the “browning of America.”

Using a personal illustration from his upbringing—specifically his parents’ struggle against restrictive policies to open their own business and create a financial legacy for their offspring—Roberts showed how livelihoods are affected by territoriality and potential is lost.

“So what’s all this got to do with radical diversity, preacher?” he then asked his listeners.

The radical diversity message in the Matthew text, he explained, is that because the “little children” who were brought to Jesus “didn’t really count for much” at that time and in that place, the disciples “protected their Lord from the children; ‘he’s mine.’”

“Jesus broke with convention,” said Roberts. “He stood up against common practice and tradition. That’s what we’re talking about when we describe ‘rad,’ how people of faith can break with conventions that are deleterious.” 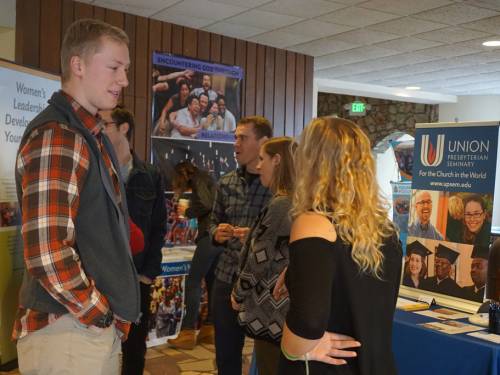 College students visit the many exhibits available in Anderson Auditorium during the conference. (Photo by Emily Enders Odom)

In the passage from John’s Gospel, where Jesus, a Jew, interacts with a Samaritan woman, Jesus takes a similar stand. “We may have some difference in background,” Roberts imagined Jesus saying, “but we are human. Jesus broke with tradition in an act of radical reinvention that would lead to radical diversity.”

In conclusion, Roberts charged his hearers with two assignments if they are serious about a space where radical diversity can take place—first to find a way to engage with somebody who has a different perspective, and second to be alert to what is happening in the world.

The call to offering was given by the Rev. Dr. J. Herbert Nelson, II, Stated Clerk of the PC(USA). “The planning team fought for 100 percent of the offering to be given to the Freedom Rising Fund,” Nelson said, “which addresses the worsening plight of the African-American male.” Nelson also introduced a new national initiative, Hands & Feet, which will serve “to highlight and strengthen local and national efforts by the PC(USA) to facilitate change and communicate God’s love,” primarily through mission and ministry projects on the ground in St. Louis, Missouri, site of the 223rd General Assembly (2018) and at subsequent assemblies.

On the afternoon of Jan. 4—following a Call to Worship, Call to Confession/Prayer of Confession/Assurance of Pardon led by the Rev. Jan Edmiston, co-moderator of the PC(USA)—Roberts read his two texts, Exodus 1 and Psalm 46, the basis for his sermon entitled, “The ‘Thingification’ of Human Beings,” which presumed that the conference’s engagement with unity in the face of diversity would also include religious diversity.

Moving to the Exodus passage, Roberts said that “if there’s any lesson that sticks in my craw from Exodus, it’s that human beings are incredibly forgetful.” Even though Joseph, an Israelite, had been a “higher up in Pharaoh’s cabinet,” the Egyptians had forgotten the story and oppressed the Israelites, who were no longer human in their eyes.

“They are like things,” he said, “to make the Egyptian economy flow.”

To put his point in context, Roberts used the example of being invited by a friend to “the friendliest church.”

“Have you ever gone to a friend’s church and nobody spoke to you,” he asked. “You get to feel a little bit ‘thingified,’ a little bit dehumanized. To dehumanize is to deprive someone of the qualities that make them uniquely human. We do it when we use labels…that somehow dishonor who we are as creations of the one High God. We do it when we use the influence we have to manipulate another human being or a set of human beings, when we use our resources to maneuver or insource or outsource other human beings, treating them like objects to serve our own desires.”

After stressing that the Christian calling in the face of “thingification” is humanization, Roberts moved into a discussion of the Confession of Belhar, which was adopted by the 222nd General Assembly (2016).

“It’s an amazing statement, beautifully written, very insightful,” he said. “Before its adoption, all of our statements, the ancient and the new ones, derived out of a Western perspective. Belhar is derived from the experience of South Africa and adds a new voice about what it means to be human in the world in the face of oppression. Belhar speaks to what we’re trying to get at today—What is the nature of peace in the face of oppression? And the Belhar Confession speaks to it. And if that’s not good enough for you, listen again to the Psalmist, ‘God is a very present help in trouble.’”

He concluded by saying that Christians have a role in the face of oppression, and “that role is not to gather peace and comfort for our own satisfaction.”

“You and I are to be the kind of people who are courageous enough to stand up for peace, even if it means being a single voice,” he said. “You and I have the role and responsibility of serving as the very mouthpieces of the creator. And please! In the name of the Father, Son, and Holy Spirit, if you ever find yourself engaged in ‘thingifying’ another human being, check yourself!”