For one Presbyterian college chaplain, it’s getting to work closely with people who are incarcerated 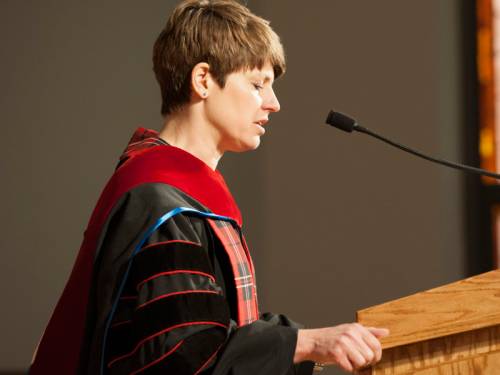 LOUISVILLE — The Rev. Dr. Teri McDowell Ott has 10 ideas for risks that privileged people should take. But to learn what they are, you’ll have to read the book she plans to publish next spring.

For those of us who can’t wait a whole year, Ott, the Dean of the Chapel at Monmouth College in Monmouth, Illinois, was the guest of the Rev. Dr. Lee Hinson-Hasty Thursday during his “Leading Theologically” podcast, which is also carried on Facebook Live. Hinson-Hasty is senior director for Theological Funds Development for the Committee on Theological Education for the PC(USA) and the Presbyterian Foundation. Their conversation was delayed a day due to technical difficulties.

Prompted by Hinson-Hasty, Ott discussed an article she wrote last fall for The Christian Century, “A liberal daughter discusses white privilege with her conservative dad.” In the article, her father — who gave Ott permission to write about their exchanges and was allowed to edit the piece before it was published — tells her he wouldn’t purchase a book with the title “Ten Risks Privileged People Should Take.” To him, privilege doesn’t exist.

The book’s not for you, Ott said, cutting her father off. “It’s for people who actually want to do some good in the world,” she told her father. The exchange didn’t go on much longer.

Later, she and her father had a “real” conversation about white privilege. Ott learned things about her father’s banking career she hadn’t known growing up, such as the way the bank — and her father — addressed local inequities.

“As much as my dad and I disagree,” Ott wrote, “we love each other. When we ground ourselves in this ethic and commit to it, seeking to listen, respect, and come to understand, we ward off the temptation to dominate, to become hard and uncompromising.”

In her conversation with Hinson-Hasty, Ott brought up a piece of advice offered by the author of “Just Mercy,” Bryan Stevenson, founder of the Equal Justice Initiative. According to Stevenson, there are a lot of well-meaning white privileged people who want to do good but settle for issuing a Tweet or buying a T-shirt. You can’t do only that, Stevenson says. You’ve got to get proximate to suffering.

Ott managed to do just that by volunteering at a medium-security prison in Galesburg, Illinois, about 15 miles from Monmouth College. For years as she’d drive past the prison, it was to her just a scary place. Now, she said, “It’s about Raphael, Luis and Jamaal, the men I have met who are in there. It’s not an issue — it’s people.”

Over time, Ott and her Monmouth College colleagues built an outreach program between the college and the prison. Inmates can learn communication conflict management skills and other disciplines.

“It’s a ministry,” Ott said. In three months of twice-a-week coursework, “we saw those men grow extraordinarily. One said, ‘I started out as a boy and I’m ending it as a man.’”

“The risk is getting out of your comfort zone,” Hinson-Hasty told Ott, “getting closer to the people they believe God is calling them to be closer to.”

“Not everyone needs to go to the prison. There are prisons everywhere,” Ott replied. “Through the book I want to encourage well-meaning white privileged people who like me are full of anxiety and don’t know what the next step is. I want the book to be the push to take the next step.”

At the end of each chapter, Ott includes action steps the reader can take with the particular risk that’s being discussed.

“One thing that benefitted me is that each chapter focuses on a thought leader or scholar of color,” Ott said. “Black Lives Matter has been the most influential movement of my life. I am surrounded by whiteness. It’s the water we swim in, and it’s the dominant culture. I have been decentering whiteness intentionally throughout the book process.”

When Ott reads a book for fun, she tries to select one written by an author of color. “I thought it might be limiting, but it’s been the exact opposite,” Ott said. “It turns out there is more than one way. It doesn’t always have to be the white way.”

During her charge and benediction at the conclusion of their conversation, Ott urged listeners — particular the white listeners — to “follow God’s calling, friends, even when it’s scary. Take the next step in your activism. If you’re not among the suffering, get proximate to suffering. Risk following or centering people of color in your life, so we can liberate ourselves from the bonds white supremacy has on all of us.”