…be led forth in peace. (Isaiah 55:12). Support to the Peace & Global Witness Offering.
Make A Donation Click Here >
Home › Rice sends Triennium worshipers out with a resounding ‘Gotta GO!’ 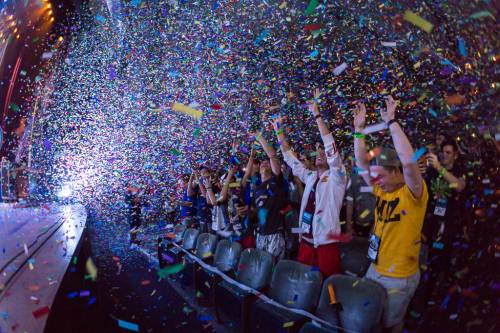 Confetti rains down on Presbyterian Youth Triennium participants at the end of Saturday’s closing worship. (Photo by Gregg Brekke)

WEST LAFAYETTE, Ind. – It was a sending like no other.

From the opening call to the closing benediction and commissioning—exploding in a surprise shower of colorful confetti—Saturday morning’s worship at the 2016 Presbyterian Youth Triennium was a fitting close to an event intentionally designed to send young people out to change the world.

In her opening greetings, the Rev. Dr. Jan Edmiston, Co-Moderator of the PC(USA) 222nd General Assembly (2016), echoed the week’s theme of “Go” in her bold charge to Triennium’s nearly 4,700 youth participants.

“I’ve seen God right here in all of you and I hope that you will go out and do amazing things that show the love of God,” Edmiston said, speaking both for herself as well as PC(USA) Co-Moderator, the Rev. Denise Anderson, who was unable to be present but sent her love.

“One of the things that Denise and I are hoping that you will think about—and this is kind of hard,” she continued, “is what breaks God’s heart in your neighborhood, your town, your city, your school. In order to notice what that is, you’ve got to keep your eyes, ears, and hands open; and our hope would be that you would address whatever that it is. Maybe it’s bullying, addiction, loneliness, depression—maybe it’s people who feel that they’re not loved and they don’t belong, but they really do and they just haven’t heard that good news yet. That is my hope for you, that you would address those things in the name of Jesus Christ.”

Although the previous night’s worship had kept the youth and their adult leaders out until well past 10:00 p.m., spirits continued to soar on Saturday morning as worshipers willingly rose to their feet to sing despite a gracious offer from Beth Mueller, lead vocalist for the event’s praise band, who had said they could “stand for the first two and sit for the third” of the service’s opening songs. 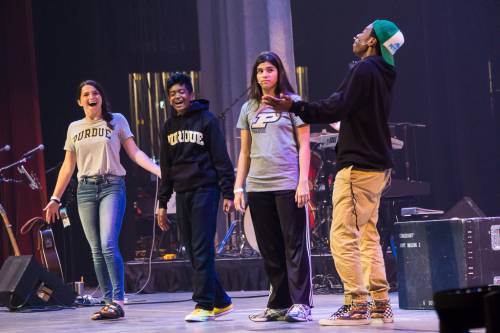 The Presbyterian Youth Triennium drama team ask ‘Where do we go from here?’ at Saturday’s closing worship service. (Photo by Gregg Brekke)

Mueller, who serves as Worship Arts director at Shepherd of the Hills Presbyterian Church in Austin, Texas, was accompanied all week by band members Lucy Jordan, Chris Gordon, and B-Man Floyd, all from Shepherd of the Hills, as well as Calvin Rogers, a member of the Triennium Production Team, who filled in on keyboard when the band’s regular keyboardist couldn’t make the event. Rogers, who hails from Nashville, Tennessee, also accompanied the Triennium choir at Saturday’s service.

Once again, the young members of the Triennium Drama Team—Brianna Coppolino, Francois Ibrahim, Olivia Magaraci, and James CI Williams—brought to the gathering their original interpretation of the “Go” theme, asking such questions as, “Where do we go now from here,” “How do we live like we lived this week,” and “How do we do the things God has asked of us?”

“We are freaks, right,” asked one of the team’s members to loud cheers. “We’ve been at church all week—that’s freaky. I find it hard to believe that God is working through us, but I’m going to be proud of who I am, and I’m going to embrace my freakiness as a gift of God.”

The drama team’s presentation was followed by the first of two beautifully-sung choral anthems, “The Road Home” by Stephen Paulus, conducted by Phillip Morgan, director of Music at Central Presbyterian Church in Louisville, Kentucky. The second anthem, “This Day” by Edwin Hawkins, followed the sermon. 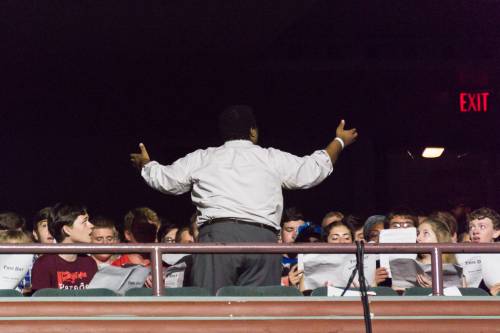 “Conducting that choir of 360 eager and talented youth was an amazing experience,” Morgan later said. “The few hours we spent together preparing the anthems for the closing worship service are moments I will never forget, and I hope that they won’t either.  The music of Paulus’s ‘The Road Home’ is still ringing in my ears, and the words are ringing in my heart!”

Invited to preach about “going into the world,” Rice—whose sermon was entitled “The Great GO-Mission”—chose as his text Matthew 28:18-20.

“Go and see; Go and do likewise; teach me the way that I should Go; let my people Go; and Go into the world,” Rice began, reiterating the week’s daily themes around “Go.”

“I find it interesting, my friends, that the main reason why we don’t go is because we can’t let go of those things that keep us from going,” he continued. “I want us to leave today understanding and believing that’s exactly what we’ve got to do. We’ve got to go!”

Rice said that what puts this all into motion is Jesus’ authoritative statement found in verse 18. It is only after that that Jesus says “therefore, go.” 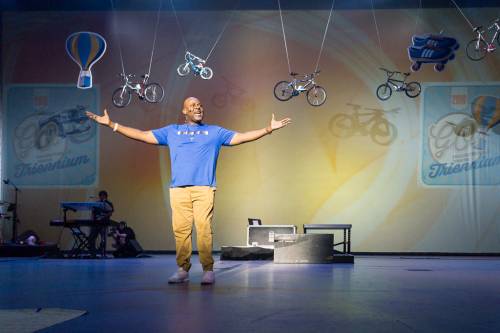 Rice then deepened his already powerful connection with the youth by suggesting that Jesus might have said things—lifted straight from contemporary culture and urban slang—like, “’How you doing?’ or ‘Bye Felicia’ or ‘Hol’ up, hol’ up, hol’ up, we dem boyz; we makin’ noise,’” the latter from the hip hop artist, Wiz Khalifa.

The thunderous laughter continued—alongside Rice’s own knowing, “heh, heh, heh”—as he even threw in a lyric from a Justin Bieber song.

Then, returning to the text, Rice said that Jesus’ charge applies to all nations, all people.

“Friends, this is one of the most inclusive messages in the Bible,” he said to applause. “You see, it was believed that the Messiah would come for one people and would be exclusively for one people, but Jesus was and is and will forever be for everyone. Everyone. And with this statement, Jesus empowered his disciples to change the world.”

Rice said what that really means is that Jesus’ disciples—and today’s disciples—are agents of change.

“What is it that has us so hesitant that we can’t do this,” he asked. “Whatever it is, I want you to look at it and say, ‘Gotta go, gotta go.’ Whatever it is. You got some haters in your life, look at ‘em and say, ‘Gotta go, gotta go.’ Is it bad grades? Is it your significant other, you know, the one with the bad attitude? Too many activities? Look at some of it and say, ‘Gotta go.’ Substance abuse? You mad all the time? Worried that they won’t receive you? Concerned that you’re too young to be taken seriously. Oh, yeah. Say ‘gotta go’ to all of that stuff. We must say gotta go, because those are things that can keep us from going and the Lord really wants us to go.”

At that point, the young people started answering for themselves with shouts of “gotta go.”

“G-O means get out,” he said. “The Lord wants us to get out and see, do, and apply what we have learned. Get out and be set free. Get out into the world. That’s what the Lord wants for each and every one of us.”

Rice told the young people that their job is not easy because they will be going out into a world “where racism, sexism, classism and homophobia seem to continue to win.”

“It’s a world, he continued, “where the color of your skin can get you killed and badges are no longer immune to that. A world where folks still go hungry. A world where we got red states and blue states and nobody wants to make purple states.”

Speculating as to why previous generations—who attended and were similarly convicted by what they had heard at church gatherings like Triennium in the past—did not succeed in changing the world, Rice said that his hunch was that they changed their minds, became afraid, and stopped doing what they had set out to do.

Quoting Romans 12:1, Rice challenged the young people to make up their minds “right now” to be agents of change. And should they become afraid and feel alone in their efforts outside of the “safe place” that is Triennium, Rice offered words of assurance.

“Here’s my favorite part of our text for today,” he said. “Jesus says, ‘And surely I will always be with you even until the end of the age. I don’t know about you, but that makes me feel good, because there are times when I feel like I’m all by myself in all this. That means that no matter how difficult it becomes, I’m never by myself. But I’m not the only one; you’re never alone either. The Lord is with you as well. So don’t be afraid to go. Matter of fact, you got to go. Oh, you know that you have to go because the world needs to be changed.”

Reciting a litany of all of the individuals and groups that need to hear the message that young people are agents of change—including their parents, classmates, teammates, level 1 gamers, level 40 gamers, haters, “pastors who think that they know it all”—Rice charged them to say that they have been “empowered by the one who has authority over heaven and earth to bring change.”

“And when you do that, the world will be transformed,” he said. “The world will change, but you’ve got to bring it. You gotta bring it! So that’s your ‘Great GO-Mission’! Go home and tell them that righteous change is coming!”