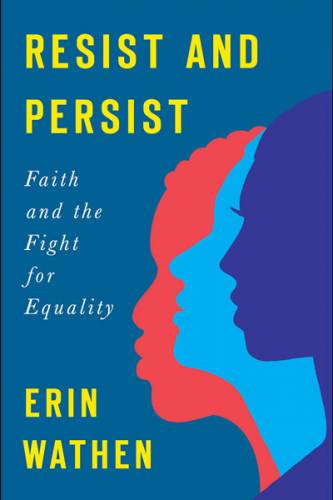 LOUISVILLE — Westminster John Knox Press is pleased to announce “Resist and Persist: Faith and the Fight for Equality” by Erin Wathen has been named a winner in the 21st annual Foreword INDIES Book of the Year Awards.

“Foreword Reviews,” a book review journal focusing on independently published books, announced the winners of its INDIES Book of the Year Awards last week. The INDIES recognize the best books published in 2018 from small, indie, and university presses, as well as self-published authors.

You can view the winners here: https://www.forewordreviews.com/awards/winners/2018/

“Being surrounded by the year’s best books from independent writers and publishers is a humbling and invigorating experience that we take seriously at every step of the judging process,” says “Foreword Reviews” Managing Editor Michelle Anne Schingler. “As the INDIES progress, our editors, and our librarian and bookseller judges, have the honor and the privilege of discovering and rediscovering independent titles that give us hope about the future of publishing and that, at their best, make us consider the world around us anew.”

Over 2,000 entries were submitted in 56 categories, with “Foreword’s” editors choosing approximately 10 finalists per genre. Those finalists were then mailed to individual librarians and booksellers charged with picking the Gold, Silver, and Bronze winners.

Named by “Publishers Weekly” as one of the Best Books of 2018, “Resist and Persist” examines the challenges of women’s equality in light of our current culture and political climate and calls women and men alike to break through the barriers that hold us all back. In its starred review, “Publishers Weekly” called “Resist and Persist” “a much-needed manifesto for 21st century Christian feminism.”

“We are grateful when we are able to publish just the right book at just the right time,” said Westminster John Knox Press publisher David Dobson. “‘Resist and Persist’ is exactly the book that is needed at this time in American society, a time when battles over women’s equality are being fought anew. We’re honored that ‘Foreword Reviews’ has recognized both the quality and the importance of Erin Wathen’s work.”