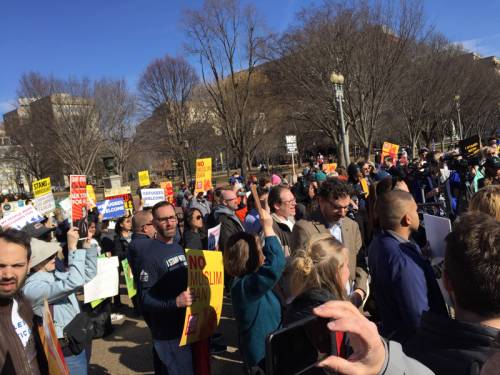 Protestors opposing the Muslim ban make their case outside the White House in 2018. (Photo by Susan Krehbiel)

LOUISVILLE — Forced to leave their homes and their countries, migrants often set out on journeys with a vague understanding of where they are headed. Refugees and asylum seekers know that even when the physical route itself is direct, their metaphorical journey is much less certain.

People who accompany refugees and migrants, either in transit or in their final destinations, also embark on a journey of sorts. Through these encounters — whether offering short-term respite, nourishment to those passing through, or volunteering to assist someone settling in a new community — their paths cross and their journeys become entwined.

Providing support from the national office, Presbyterian Disaster Assistance is a long-distance partner on these journeys. Long distance because we provide support from afar, assisting from a different vantage point. But more importantly, because we are there to accompany our partners over time, to “go the distance” with them as their ministries evolve and shift to address changing circumstances.

Last year challenged all of us to take risks and explore fresh roads to ministry to meet the combined threats of displacement and the pandemic. It brought new relationships and deepened existing ties. It determined our priorities in how and when to expend our financial and personnel resources. And through it all, we saw the hand of God at work. In the sections that follow, we share how refugee ministries continue to evolve and the work of PDA evolves with them.

The evolution of refugee ministry

Our long-standing partnerships with ministries in Southern California have grown considerably since 2014, when PDA reinvested in refugee and asylum ministries. That fall, much of the country’s attention was on the unaccompanied children and young families from Central America arriving at our southern border. Following a consultation with Presbyterians in the Southwest, PDA began working directly with the Presbytery of the Pacific in the Los Angeles area, one of the key destinations for these children and families. With PDA support and encouragement, the Presbytery of the Pacific stepped out into this new ministry.

As we became more involved, other presbyteries soon invited PDA to partner with them to expand refugee and asylum ministries in their respective regions. By 2019, PDA was partnering with Los Ranchos, San Gabriel and San Fernando Valley presbyteries, and in 2020 welcomed Riverside Presbytery.

In each of these five presbyteries, different priorities and needs lie beneath the surface, resulting in distinct strategies. For example, Pacific mobilizes Presbyterians to join interfaith advocacy and is a lead partner with the Ecumenical Collaboration of Asylum Seekers (ECAS) to prepare congregations to receive asylum seekers. San Gabriel is focused on education and expanding the number of Presbyterian churches active in immigrant ministry. Like Pacific, they have joined in detention visitation and establishing host churches to accompany asylum seekers. Riverside’s participation is crucial due to Adelanto Detention Center’s presence within their bounds, offering logistical support to volunteers from the other presbyteries and key transitional assistance to those released from detention. Other presbyteries serve most effectively by providing support to partners with an existing ministry, such as San Fernando. PDA provides support to each presbytery, allowing them to meet unprecedented demands and opportunities for ministry.

As highlighted in a story published by Presbyterian News Service on Wednesday, the impact of COVID-19 on the health and economic survival of immigrant communities was evident in the high proportion of grant requests PDA received from immigrant congregations and worshiping communities. What we have learned from the COVID-19 grant cycles and the contacts we have made will help inform our work for years to come. 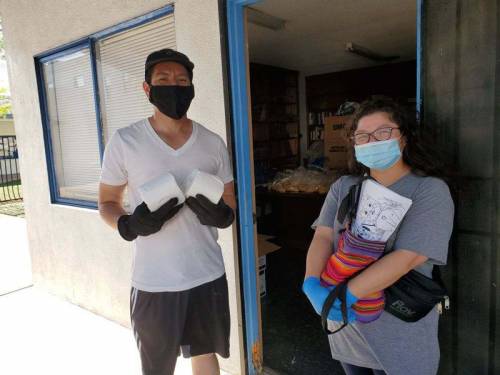 The impact of COVID-19 on the health and economic survival of immigrant communities was evident in the high proportion of grant requests PDA received from immigrant congregations and worshiping communities. (Photo by Alicia Macias)

COVID-19 wasn’t the only major news story of 2020. George Floyd’s death saw a dramatic increase in racial justice and civil rights protests across the country and brought Black Lives Matter to the global stage. As the summer progressed, the U.S. grappled with its long-term commitment to systemic racism, which upholds racial inequality and leads to discrimination in housing, education, criminal justice, employment, health care and immigration policies. The call for racial justice has been a clarion call for PDA to be more intentional in addressing the impact of racism in immigration policy and in the way we respond. For years, media attention on immigration enforcement has focused primarily on Mexicans and Central Americans. In fact, according to research done by the Refugee and Immigrant Center for Education and Legal Services, nearly half of all families locked up by Immigration & Customs Enforcement (ICE) in March–June 2020 were Haitian. In addition, if Haitians are declared eligible for a release bond, the bond will average 54% more than those of other immigrants, making Haitians more likely to remain in jail. In reality, Haitians were 2020’s largest detained nationality. And, while detention is never a good experience, ICE is especially hard on Black immigrants: They are six times more likely to be sent to solitary confinement and make up 20% of those facinportation — with most deportations due to minor offenses.

As a member of the Interfaith Immigration Coalition, PDA (and other PC[USA] offices) advocated with Haitian Bridge Alliance and Shut Down Berks Interfaith Witness to end family detention and to reunite families. We joined interfaith efforts to end immigration detention in Georgia, where ICE-contracted prisons have the highest rate of COVID-19 infections in the country and widespread medical abuse. In both instances, immigrants of color have been the most impacted.

Black and Central American refugees face different challenges, both while in detention and once they are released into the U.S. That is why we are called to support faith initiatives such as ECAS (mentioned above) that allow for immigrant-centered, immigrant-led, immigrant participatory (“not for us without us”) models that challenge the white savior/white supremacy Christian church model of asylum hospitality in the United States.

Scripture has many calls to welcome the stranger, so it is no surprise that the modern-day practice of welcoming refugees and asylum seekers to the U.S. has its roots in churches, synagogues, and ecumenical and interfaith task forces. And yet, what was once understood as a source of national pride and core to our Christian teaching — to embrace those who yearn to breathe free — has become a topic of debate. In today’s world, we cannot expect welcome to just happen; it takes intention and preparation. 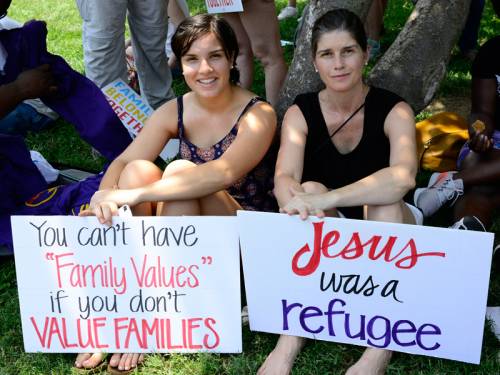 As we approached the end of 2020, it was clear that we would soon have a chance to rebuild the U.S. refugee resettlement program and we needed to get the word out. Knowing where to begin can be challenging for churches interested in organizing a Welcome Team to accompany refugees. To assist congregations as they navigate what could be a long period, PDA created “Preparing Welcome,” a new guide that explores different aspects of the refugee experience as well as outlines actions that congregations can take in preparation for their arrival. Laying this groundwork encourages groups to assess their strengths and weaknesses and to enter this type of cross-cultural ministry with our eyes open to learn from those whom we seek to serve and be guided by their vision.

Changes in the United States’ asylum policies over the past four years have created multiple barriers for bona fide refugees seeking legal protection. These sweeping changes do not allow for adequate consideration of the individual stories, increasing their risk of harm in Mexico or U.S. detention centers. Each has made the arduous journey because they are desperate for a life in the U.S. where they and their families can survive and thrive. Most have experienced threats, violence, and persecution in their home country as well as in Mexico. If these people are forced to return home, the possibility is great that they will eventually be put to death. 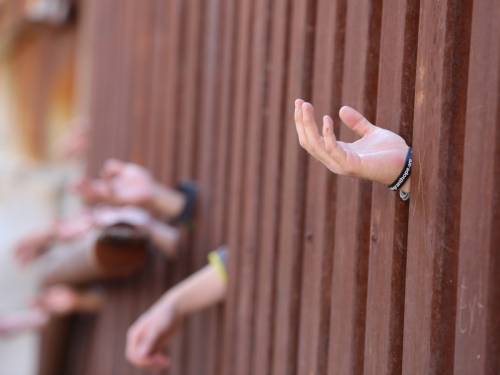 There’s no better time to acknowledge our shared humanity and recognize the personhood of every person waiting in detention. (Photo by George Martelland)

In the face of the U.S. government’s abandonment of the basic right to seek asylum, the Kino Border Initiative (KBI), located in the twin cities of Nogales, Arizona, and Nogales, Mexico (collectively known as Ambos Nogales), found a unique way to bear witness as part of a campaign to Save Asylum.  Established in 2009 by six Catholic partner groups on either side of the border, KBI provides for migrants’ immediate needs and promotes U.S.-Mexico border and immigration policies that affirm the dignity of the human person and encourage a spirit of binational solidarity. In 2020, several ecumenical and interfaith partners, including Presbyterians in both de Cristo and Grand Canyon presbyteries, joined KBI in their advocacy.

Centered on individuals seeking asylum who have been held for months in Mexico, the KBI Save Asylum coalition assisted them in documenting and reading aloud testimonies from both sides of the border wall. By sharing them on social media, their stories of persecution can reach everyone, including those in political power. Starting with their first event in August 2020, KBI’s Save Asylum events have been broadcast live from Ambos Nogales, and videos of past events are shared on their Facebook page. All the testimonials KBI gathers at Ambos Nogales will be added to the asylum testimonial exhibit in the archives of the Holocaust History Center at the Jewish History Museum in Tucson.

Life can be challenging at the best of times, but 2020 demanded more of us than anyone could have predicted. From January onward, the bombardment of bad news left many shell-shocked: Large numbers of Americans found themselves with no roof over their heads, no jobs to provide for their families, no way to cope with the pandemic, and no way to hide from the systemic racism that informs the lives of our BIPOC siblings. It might seem counterintuitive to turn our focus away from our national discomfort right now and toward the government’s rulings on immigration and resettlement, but there’s no better time to acknowledge our shared humanity and recognize the personhood of every person waiting in detention. They, too, long for a better life in the U.S. PDA invites you to join us as we continue our mission to provide humanitarian assistance to all refugee families with basic needs, legal orientations and family reunification assistance as we advocate for more humane treatment by the U.S. government.