World Refugee Day falls during Pride Month, and being LGBTQIA+ is a reason many refugees flee 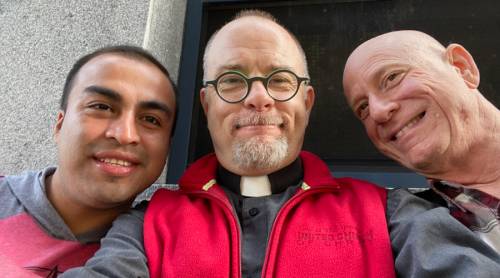 Petter, a refugee from Guatemala who is gay, with his sponsors the Rev. Victor Floyd and his husband Lou Grosso. (Photo courtesy of Victor Floyd)

LEXINGTON, Kentucky — When the Rev. Victor H. Floyd traveled to the U.S.-Mexico border with a group from Calvary Presbyterian Church in San Francisco, he was prepared to encounter a lot of pain in refugees they would meet in U.S. detention facilities and migrant shelters in Tijuana.

He wasn’t prepared for Petter.

The Guatemalan young man was at Casa de Luz, a shelter for LGBTQIA+ migrants. Back home, he said his father and brothers attempted to murder him, twice, beating him and leaving him for dead on the side of the road.

In a post on the Presbyterian Disaster Assistance blog, Floyd wrote, “He wanted the stuff of biblical shalom: a community, a boyfriend, shelter, food, a purpose, to be able to imagine a better future.” They were things Floyd and his husband, Lou, found they were able to at least open the door to, becoming his sponsors and welcoming him into their home while his case for asylum proceeds.

Floyd welcomed Petter knowing there are thousands of people like him among the migrants that come to the United States. World Refugee Day this Sunday (June 20) arrives in the midst of Pride Month, but the paths of people who are refugees and LGBTQIA+ intersect every day.

“I’ve met a number of persons who are refugees that have sought safety in the U.S., also Canada, also the U.K. and South Africa, and the story is always the same,” says Dr. Michael Adee of the Global Faith & Justice Project and former executive director of More Light Presbyterians. “It’s about safety and survival.” 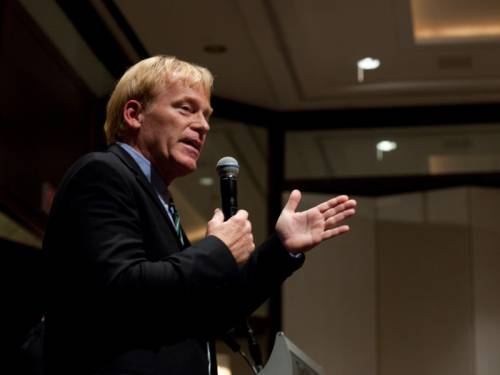 Adee says there are still 69 countries in the world where same-sex relationships are criminalized and LGBTQIA+ people face penalties including death.

The Rev. Shanea D. Leonard, Associate for Gender and Inclusion in the PC(USA) Office of Gender, Racial & Intercultural Justice, says the United States is still grappling with LGBTQIA+ inclusion, but “it’s a lot more open and welcoming than other places.

“Folks who are part of the LGBTQIA+ community who come from other countries sometimes come because it’s not legal, and it’s not safe for them to be fully themselves in their place of origin.”

And even in countries where being LGBTQIA+ is not outlawed, it can still be risky.

Susan Krehbiel, Associate for Refugees & Asylum for Presbyterian Disaster Assistance (PDA), says that people who are LGBTQIA+ make up a larger percentage of the refugees that come to the United States and other countries than their percentage of the population as a whole, and Adee agrees. And their identity usually makes an already harrowing journey even more dangerous.

Floyd said that one of the striking things about Casa de Luz was most of the people there were traveling alone, while people at other shelters are often in groups. Since family situations are often part of the reason LGBTQIA+ refugees leave their home countries, they are often traveling alone and end up forming families of choice on the road. Krehbiel notes that one of the “caravans” of migrants that formed in 2018 was a group of LGBTQIA+ refugees that banded together for safety.

The hazards of the immigration process once refugees and asylum seekers reach the United States can also be greater, particularly for transgender refugees who can become targets for abuse both from guards and fellow detainees. Floyd described the story of one gay young man whose experience was so horrendous, including a turbulent flight from Texas to Colorado in the back of a cargo plane with no seats, that he asked to self-deport back to Mexico because he did not want to be in the United States anymore. Floyd said that man is now trying to get to Canada.

Adee cited the Rainbow Railroad, a global organization based in Canada that helps people who are LGBTQIA+ get out of countries where they are persecuted and threatened for being who they are.

Everyone interviewed for this story said, without prompting, that one of the things people in churches wanting to reach out to LGBTQIA+ refugees need to be aware of is that churches have often be the source of a lot of the pain and persecution they have experienced, the same as many people who are LGBTQIA+ in the United States. Many African countries, in particular, have been evangelized by missionaries with very conservative theologies that teach homosexuality is a sin.

“If they were fearful of LGBTQ people, that gave them the judicial reason for persecution,” Adee says. That came in part from “the global export of hate and homophobia from the U.S. religious right, deliberately going to a number of countries teaching what would be called ‘family values,’ but only one certain kind of family, and underneath that, LGBTQ people will hurt your children, and they’re destroying society and so forth. So, what we saw in the U.S. in the 1980s is now exported around the world, from the U.S. religious right.

“And the fingerprints of U.S. white evangelicals were absolutely behind the ‘kill the gays bill’ in Uganda,” Adee added, referring to the 2014 Uganda Anti-Homosexuality Act that originally contained the death penalty, though the law was amended to life in prison.

“We have to reckon with, what role does Christianity play in the fact that these folks have to be refugees in the first place,” Leonard says.

That makes it incumbent on churches that want to reach out to LGBTQIA+ refugees, and the queer community in general, to be explicit in saying they are welcoming of people who are LGBTQIA+ — which doesn’t mean just putting a rainbow flag on your sign or website, though that can be a good idea.

“It also has to be in how your liturgy, your music, to make sure that it’s something welcoming,” Leonard says. “What does your leadership look like, your session, your leaders even in the pulpit? Is there diversity or is it monolithic?

“How do you show up in the community? Far too often we open our doors and expect people to rush in. Guess what, no one’s rushing into the church anymore.”

Church World Service just presented a pair of webinars about LGBTQIA+ refugees, and speaker Oluchi Omeoga, co-director of the Black, LGBTQIA+ and Migrant Project (BLMP), suggested that as groups prepare to welcome refugees they check some presumptions such as what a refugee may want in their home or what kind of clothing they would want. Omeoga and others also suggested welcoming groups should introduce LGBTQIA+ refugees to people and organizations for the queer community in their new home.

And like with any refugee, it is important to keep in mind the situations and the road that has led them to your door.

“Remember that you will probably never meet a trans woman who has not suffered abuse,” Floyd says. “They’ve been told that they are damaged goods and innately sinful and all those things.”

Our goal as Christians is to meet them with love, and as Floyd and his husband have found with Petter, that can be an unexpected blessing.

“This is an amazing outpouring of love that we have experienced just by wanting to help somebody,” Floyd says. “And he’s helped us much more than we’ve helped him.

“He is our family right now. And we know that that’s temporary. And we’re just really savoring this, this blessing. The scariness of offering our home to somebody we didn’t know was very real. I understand why people wouldn’t want to do that. And not everybody can. But if people can, I would love to see more loving homes for people who are running from violence and running from hate and running to safety, running to, hopefully, a family.”

Adee concludes, “If we just simply said to one another, ‘we are all children of God and one human family,’ the world will be the place I think God envisions for us.”