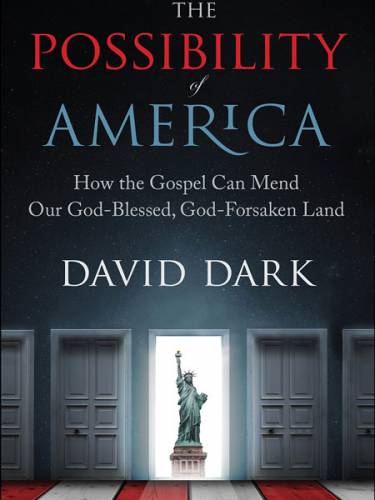 LOUISVILLE — Can American Christianity be redeemed?

David Dark, author of the 2005 book “The Gospel According to America” sought to answer that question in his post-9/11 analysis.

In that book, Dark warned American Christianity about the false worship that conflates love of country with love of God and delved deeply into the political divide that had gripped the country and the cultural captivity into which so many American churches had fallen.

In our current political season, the problems Dark identified have blossomed. The assessment he brought to these problems and the creative resources for resisting them are now more important than ever.

Dark has returned with “The Possibility of America: How the Gospel Can Mend Our God-Blessed, God-Forsaken Land,” turning his signature mix of theological, cultural, and political analysis to the issues of the Trump era.

For those frightened by their own anger and looking for a way to reframe the state of the U.S. democracy, Dark offers a vision of a fractured yet redeemable America. By addressing issues like the rise of white supremacy, evangelical surrender and our protective sentimentality, Dark inspires against paralyzing anger and fear, instead inviting rigorous examination of the gospel of Jesus Christ in relation to American history and the current state of affairs.

“It’s so easy to demonize when we don’t know what to do with our despair,” Dark writes. But by responsibly examining not only our ideas but also the conflicts and lies we have avoided to get by, Dark creates a definition of neighborliness that is ever-widening in hopes of inspiring “that fundamental ritual of a thriving democracy, the give-and-take of candid exchange.”

“This is a book built on the understanding that there is a civic imagination that imagines us into a better way of being human together,” says poet and theologian Pádraig Ó Tuama. “Taking Twitter, literature, poetry, music lyrics, film, television, cartoons and conversations as sacred texts, David Dark looks at the things that are held up by language: power, fear, and hatred. Dark’s work holds the hope that love is a muscle we can exercise in public — and he holds us to account for how we practice.”

“The Possibility of America” is now available from Westminster John Knox Press and other major retailers.

David Dark is Assistant Professor of Religion and the Arts at Belmont University. In addition to writing “The Gospel according to America,” he is the author of “Life’s Too Short to Pretend You’re Not Religious,” “The Sacredness of Questioning Everything,” and “Everyday Apocalypse.” His work has appeared in “Pitchfork,” “Paste” and “America Magazine.”