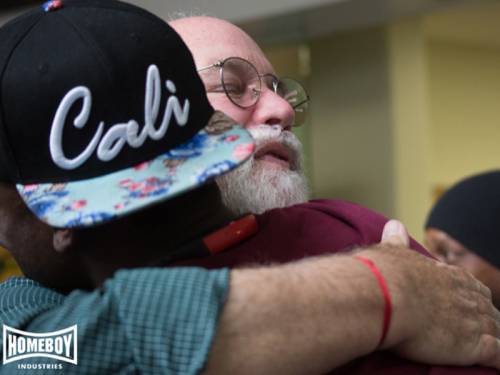 Father Gregory Boyle hugs one of his homies. (Photo courtesy of Homeboy Industries)

LOUISVILLE — During a Zoom conversation Wednesday with the founder of Homeboy Industries, Father Gregory Boyle told hundreds of leaders connected to the Presbyterian Church (U.S.A.)’s 1001 New Worshiping Communities movement that in the midst of twin pandemics, “we must stand in the right place — with the poor, the powerless and the voiceless.”

Homeboy Industries exists to improve the lives of former gang members in East Los Angeles. Started in 1988 with a then radical approach — to treat gang members as human beings — Homeboy Industries has grown into the largest gang intervention, rehabilitation and re-entry program in the world. Last year 15,000 people came through the doors, many of them barricaded by walls of shame and disgrace. Through tenderness, which Boyle called, “the highest form of spiritual maturity,” those walls can come down.

Those who come, Boyle said, are traumatized and despondent, many saddled with mental health issues. But as they find hope that was foreign to them, they begin to transform their pain, rather than transmitting it. Homeboy Industries is able to offer clients culturally appropriate and timely mental health services.

“They become the sanctuary they sought,” Boyle said. “They go home and provide that sanctuary to their kids and others. All of a sudden for the first time you’ve broken the cycle.”

Boyle told the story of 25-year-old Jose. A gang member, he’d been in prison. Before that he experienced homelessness and heroin addiction. Halfway through an 18-month rehabilitation program, he was a valued member of Homeboy’s substance abuse team, helping other homies recover from their addiction issues.

When Boyle discovered he was to be the only scheduled speaker at conference in Richmond, Virginia for 600 social workers, he asked Jose to come with him to share his story, which Boyle had not yet heard.

Jose got up in front of those social workers and said, “I guess you could say my mom and me didn’t get along so well. I think I was six when she said to me, ‘Why don’t you just kill yourself? You’re such a burden to me.’”

As the 600 social workers gasped, what Jose said next turned their gasps into laughter. “It sounds way worser in Spanish,” Jose said.

Jose was nine when his mom drove to Baja, California and dropped him off at the door of orphanage. Jose was there for 90 days until his grandmother found out where he was and rescued him. Upon his return, his mom beat him every day. Jose would go to elementary school each day wearing three T-shirts. The blood seeped through the first one. Jose thought he could still see it on the second one, so he put on a third one.

Kids at school made fun of him, calling him a fool for wearing that many shirts when it was 100 degrees outside.

Boyle said Jose stopped his talk at this point for a moment, as if he were staring at a piece of his story only he could see.

Then through tears, Jose said, “I wore three T-shirts well into my adult years. I was ashamed of my wounds and didn’t want anyone to see them. But now I welcome my wounds. I run my fingers over them. My wounds are my friends. After all, how can I heal the wounded if I don’t welcome the wounds?”

Awe came over everyone in that room, Boyle said. People began to see themselves in kinship with Jose.

“The truth of the matter,” Boyle said, “is unless you make friends with your wounds, you may be tempted to despise the wounded, which might explain the tribalism we’re experiencing.” 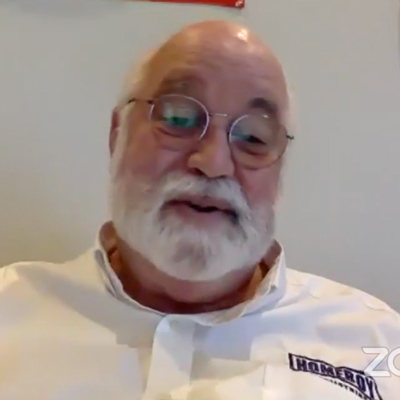 Boyle said people who are strangers to themselves pay a price, sometimes embracing a Christianity and belief system that burdens them with an exacting, judgmental God who is as uncomfortable with their wounds, as they are.

Recalling another conversation he had at one of his talks in Houston, Boyle said a former gang member who was working on the streets approached him, asking, “How do you reach them?”

For starters, Boyle told the homie, you stop trying reach them.

Acknowledging that none of this makes sense unless we have a profound sense of God as compassionate, loving and kind, Boyle spoke about a mystic writer and friend who said, “once you know the love of God you fire all the other gods.”

“Fire the god who allows you to separate children from their parents at the border,” Boyle said. “You fire the god that gives you permission to pack a church during the pandemic. You fire a god who thinks that some matter more than other lives or believes that some lives are superior to other lives.”

“You want to embrace the God of love who enables you to stand in awe of what the poor have to carry, rather than in judgement of how they carry it,” he added. 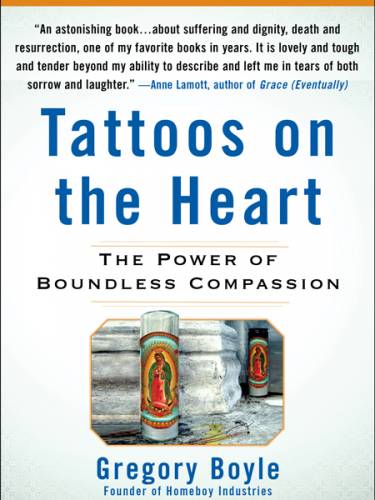 Father Gregory Boyle is author of The New York Times bestseller, “Tattoos on the Heart.”

Referring to a line in the Christmas carol “O Holy Night” — “Long lay the world in sin and error pining, ‘til he appeared and the soul felt its worth” — Boyle said, “Yes, it’s about Jesus and Christmas. But it’s also the job description for every one of you. You show up and the soul feels its worth.”

“How do we hold up a mirror and tell people the truth, that they’re exactly what God had in mind when God made them?” he asked.

“The moment it becomes about fixing, saving, rescuing and reaching people, chances are you’re going to burn out,” he said. “If you burn out, you’ve allowed the ministry to become about you.

“It will always be a joy if it isn’t about you. Stay anchored in the present moment, love being loving — and delight in what you’ve been given.”