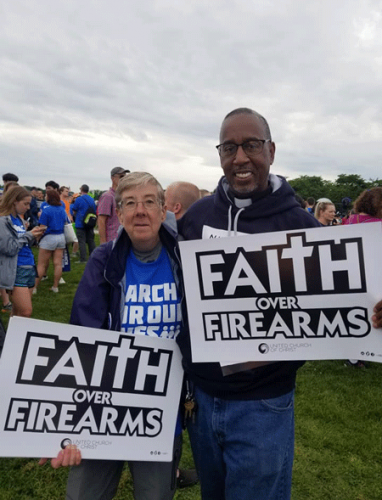 The Rev. Jimmie Hawkins poses with Sandy Sorenson of the United Church of Christ as they hold “Faith Over Firearms” signs. (Photo courtesy of Jimmie Hawkins)

LOUISVILLE — The Rev. Jimmie Hawkins of the Presbyterian Church (U.S.A.) was among thousands of people who attended the March for Our Lives rally in Washington, D.C., last weekend to persuade elected officials to take meaningful action to stop the gun violence that’s ravaging the nation.

The Saturday event took place on the National Mall on a day in which similar rallies were held in other cities, including Atlanta and New York City, in the wake of gun-related tragedies such as the school shooting in Uvalde, Texas, the mass shooting at a grocery store in Buffalo, New York and a shooting during an event of the Irvine Taiwanese Presbyterian Church in Laguna Woods, California.

“I thought it was important to be present as a minister, as a person of faith, and as an adult,” said Hawkins, who leads the Office of Public Witness (OPW) and the Presbyterian Ministry at the United Nations. “The epidemic of gun violence is not decreasing and is traumatizing the nation, and many want something done.” 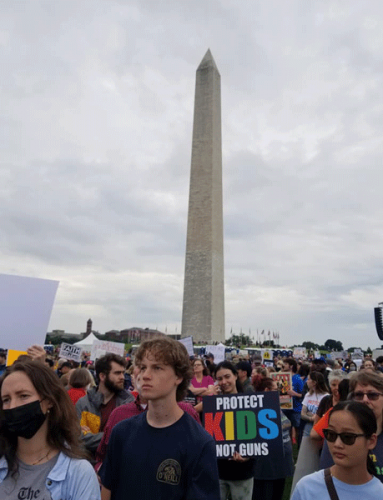 During the March for Our Lives in Washington, D.C., people held signs decrying gun violence. (Photo courtesy of the Rev. Jimmie Hawkins)

The June 11 rally — billed as a way to demonstrate to elected officials that Americans “demand and deserve a nation free of gun violence” — was put on by March for Our Lives, an organization founded by student survivors of a 2018 mass shooting at Marjory Stoneman Douglas High School in Parkland, Florida.

The rally is “resonating with people due to the fact that it is young people who are strongly impacted by gun violence and they are leading the effort,” said Hawkins, who represented PC(USA) as clergy and national staff at the weekend event. “The inability of Congress to pass any legislation is a motivating point for many as a majority of citizens want a strengthening of background checks and many desire legislation to ban assault weapons.”

Meanwhile, young people with the March for Our Lives organization have had “tremendous success in lifting a prophetic voice against gun violence in the nation and have inspired the state of Florida to pass legislation promoting gun safety, such as background checks,” Hawkins said. 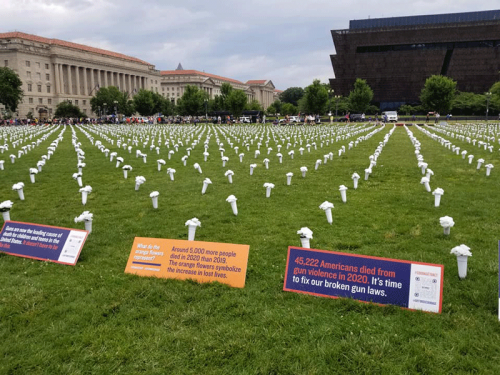 Participants in the (briefly disrupted) rally in D.C. gathered to hear speakers from the movement, family members of victims from Parkland and Buffalo, as well as a granddaughter of the Rev. Dr. Martin Luther King Jr., said Hawkins, who noted there were fellow Presbyterians present, including a group from Western Presbyterian Church in Washington, D.C.

The PC(USA) has a history of speaking out on gun violence. Earlier this month, the Rev. Dr. J. Herbert Nelson, II, Stated Clerk of the General Assembly, issued statements of lament and advocacy after recent mass shootings, and OPW released an Action Alert, calling on Presbyterians to demand, among other things, that the Senate pass an extensive background check for every gun purchase. 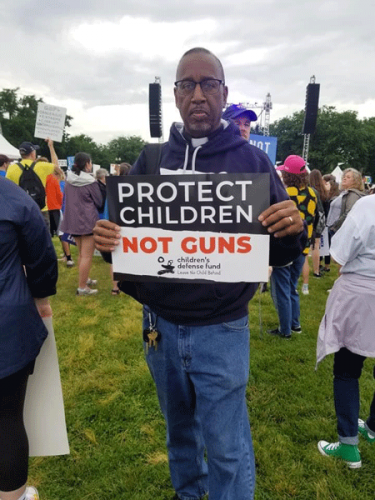 The Rev. Jimmie Hawkins was among those taking a stand against gun violence at the March for Our Lives rally in Washington, D.C. (Photo courtesy of Jimmie Hawkins)

March for Our Lives “stands alongside PC(USA) public policy statements calling for stronger and immediate action on the part of Congress and state governments to make the country safer,” Hawkins said. Also, the PC(USA) publication “Gun Violence, Gospel Values” “has been studied by congregations and used as a guide to promote calls for gun safety laws,” Hawkins said.

This weekend, in addition to the 225th General Assembly in Louisville, Kentucky, some Presbyterians will be joining a large march in D.C. by the Poor People’s Campaign.

The PPC event “will be an extension of the March for Our Lives movement as it will address violence, economic inequality, healthcare and militarism,” Hawkins said. “We encourage Presbyterians to join us on Saturday, June 18, in Washington, D.C.”