MLK speaker Mark Lomax: ‘Would color matter if we loved?’ 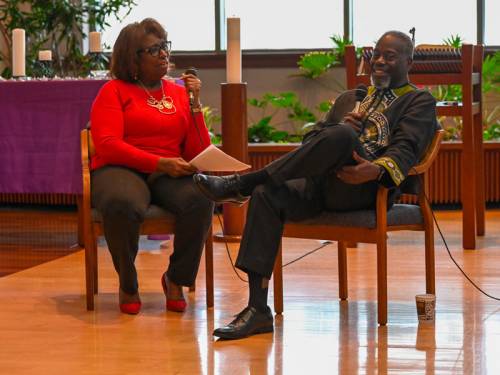 LOUISVILLE — Racism, the Rev. Dr. Mark Lomax told staff and guests at the Presbyterian Center on Wednesday, the actual birthday of the Rev. Dr. Martin Luther King Jr., is a spirit fueled by hatred and fear, a spirit born of a lie “that you and I, fellow Christians, refuse to address. You and I live into the lie to this very day.”

“Race isn’t out there somewhere. It’s in here,” he said, pointing to his heart. “It’s a belief, and that belief trumps our belief in Jesus.”

Lomax is the founding pastor of First Afrikan Church in Lithonia, Ga., and an associate professor of preaching at the Interdenominational Theological Center in Atlanta. His sermon and a subsequent question-and-answer session were part of a two-hour chapel service called “The Two Americas: Lamenting the Nightmare in the Dream” to honor the life and work of King, whose birthday will be celebrated across the nation Monday. 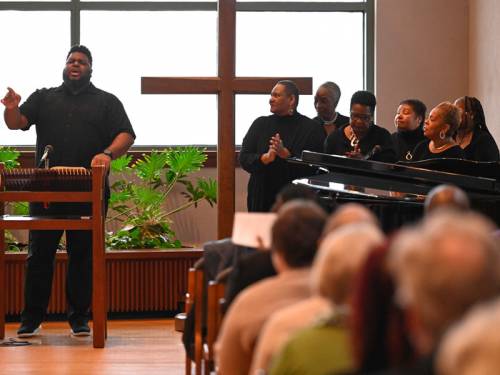 The service was enriched by two musical selections by the Peace Presbyterian Church choir of Louisville.

Lomax said his preferred mode of transportation is his motorcycle. He enjoys the back roads, because “that’s where all the twists and turns are.” But as an African American he also wonders about his personal safety while traveling those back roads. “Most times, I don’t pull over for rest. I go from city to city,” he said. “I know I could be killed and few people would care.”

People committed to Christ have three possible outlooks, he said: they can dream with King, endure the nightmare described by the life of Malcolm X — “or we can do what the church is called by God to do: We can walk in the light.”

Jesus never told his disciples nor the crowds who gathered to hear him speak to worship him — only to follow him, Lomax said. “It’s easy to worship, but it’s difficult to follow,” he said. 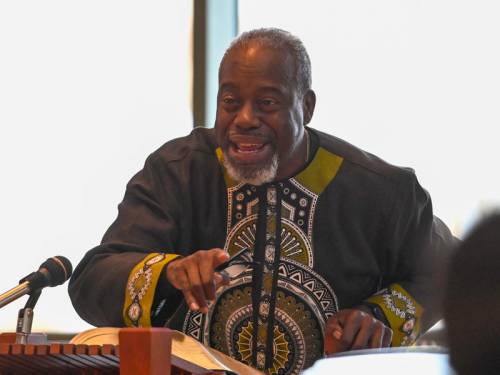 “It’s easy to worship,” the Rev. Dr. Mark Lomax told worshipers in the Chapel at the Presbyterian Center Wednesday, “but it’s difficult to follow (Jesus).” (Photo by Rich Copley)

But there’s hope: Because we’re all created in the image and likeness of God, “We don’t have to live up to anything,” he said. “God must see something in all of us … We’re called not to live the dream or the nightmare, but to love. What would happen to the Presbyterian Church if we loved each other? Would color matter if we loved?”

He said nothing can be done about the thorny issues of today, including economic disparity, “until we love each other.”

That can be difficult, especially loving those whose behavior make them harder to love. Lomax recalled the time as a youngster when he and his family attended the Soap Box Derby races in Akron, Ohio. Seated next to a white family, Lomax was spat upon.

“It took a long time before I could get to the place where I loved me, and each of you have your own stories,” he said. “Can I accept the fact that I have already been accepted by God and that God loves me just as I am? If we walk in the love of God, the world gets transformed.”

While he says he may not quite be to the place where he readily turns the other cheek, Lomax said doing so “is really about power. If someone strikes us and we strike back, we have given them power over us. We should be interested in power in Jesus’ name, who spoke about power more than he did about love.” 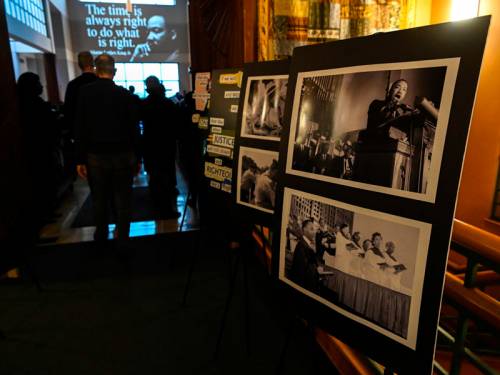 Before entering the Chapel at the Presbyterian Center, worshipers were greeted with photos and other historic information on the life of the Rev. Dr. Martin Luther King Jr. (Photo by Rich Copley)

“We should never allow others to compel us to give up the power God has given us,” he said. “If I have been struck — and I have been struck often — my responsibility is not to take the hit for the hit’s sake, but to recognize that the Spirit of God has given me the capacity to love in return. Wear yourself out striking me! I will wear myself out loving you … When you turn the other cheek, suddenly you are an equal in the conflict, and they have lost the battle for power.”

After the service, Lomax answered questions posed by worshipers and by Gail Strange, director of Church and Mid Council Communications for the Presbyterian Mission Agency. Strange asked if the nation has made progress since King was assassinated more than five decades ago. 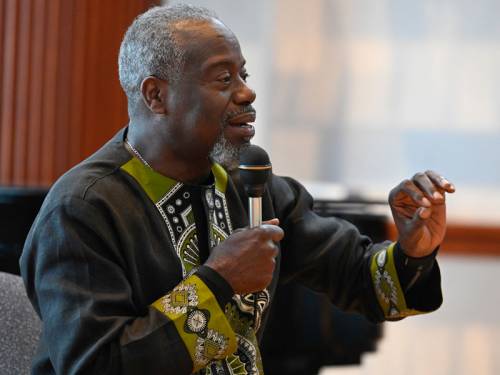 “I think we have made progress without question,” Lomax said, “and yet the spirit of racism persists.” (Photo by Rich Copley)

“I think we have made progress without question,” Lomax replied. More people of color have access to higher education and to business opportunities, “and our children notice color less than we do. And yet that spirit of racism persists.”

That spirit will be exorcised not by reciting a prayer of confession that’s printed in the church bulletin, he said, but by congregants “laying their hands on people and praying … What would happen if the church had a prayer meeting” that lasted for several days, he wondered. Ask those in a prayer meeting why they’re praying so long and so fervently and they’ll tell you, “We are praying until we see some change,” he said.

“Christians,” he said, wrapping up the question-and-answer session, “Do we have the courage to follow Christ?”