Are there US parallels? 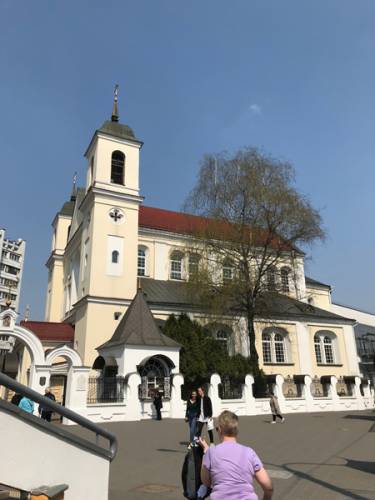 LOUISVILLE — Belarus, part of the former Soviet Union, is one of the most conquered countries in Europe. Universally gentle, its people have been forced to learn patience. But recently they declared, “no more,” and have taken to the streets by the thousands.

The demonstrations are aimed at President Aleksandr G. Lukashenko, who claimed a landslide victory, 80% of the votes cast, in the early August election, even though his opponent, Svetlana Tikhanovskaya, claimed to have won a decisive first-round victory with at least 60% of the vote.

“People have gotten tired and stopped being afraid. These are the gentlest, quietest people,” said World Mission’s regional liaison for eastern Europe, Ellen Smith. “It is absolutely amazing what has happened since the election. It’s the young people, who did not grow up during Soviet times, who are fed up. There were three other candidates in the election. One was arrested and the other two had to flee the country. There is absolutely no way he won 80% of the vote. This election was neither fair nor free.”

Smith believes there is a good reason U.S. Presbyterians should be interested in what is happening in Belarus, a country halfway around the world.

“I believe we need to be watching what is happening in Belarus because it seems to closely parallel the protest movements currently taking place in the U.S.,” she said. “I don’t know what will happen with our election in November, but it seems likely that with either result,  U.S. citizens will likely take to the streets to demonstrate. May they remember the peaceful model of protest currently taking place in Belarus.”

Smith, along with husband and fellow mission co-worker, Al Smith, lived in Russia for 10 years but moved to Berlin nine years ago, when they could no longer get the appropriate visas to stay in Russia. In her work, Ellen Smith splits her time between Russia, Ukraine, Poland and Belarus. She has been visiting Belarus since 2002, forming partnerships between PC(USA) and other Christian organizations there.

She has seen up-close the impact Lukashenko’s reign on Belarus and watched his grip grow tighter over the years.

“In the beginning, he wasn’t paying attention to what the Church was doing,” she said. “Then, as he started noticing the strengthening relationships, he began to get paranoid. Suddenly, we had to submit a detailed itinerary of everywhere we planned to go and who we were going to meet with.”

She had stopped going to Belarus — not for her own safety, but for that of the people who live there. Two years ago, things eased up, and it was possible to make visits again.

The last time she visited was May 2019 on a Presbyterian travel study seminar to explore the conflict in Eastern Ukraine from the perspectives of our partners in Ukraine and Russia, meeting with people on the ground in both places affected by the war. The trip concluded in Minsk, Belarus, bringing together Ukrainians and Russians on neutral ground for a dialogue on peacemaking and reconciliation in the context of the conflict.

The PC(USA) still has a relationship with the Interchurch Mission-Christian Social Service as well as a connection with the Brotherhood in honor of the three martyrs of Vilnius. The three youths  ­— Anthony, John and Eustathius, members of the Russian Orthodox Church ­— were arrested in 1347 for preaching in public, and ordered to consume meat during an Orthodox fasting period. When they refused, they were tortured and executed. Their bodies were kept in a crypt beneath the altar of the cathedral church in the Monastery of the Holy Spirit in Vilnius, Lithuania.

Smith continues to work with partners involved in ministry with special needs children and their families.

“These families so often feel like outcasts in a society that for 70 years institutionalized those with special needs,” Smith said. “People are not used to seeing them and too often react unkindly.” In order to protect children from insults, the parents often isolate themselves and their children.

When she first visited Belarus, she discovered the Church was doing groundbreaking work with HIV/AIDS programs, drug rehab and prison ministry, before beginning to develop programs for children with special needs. In addition to addressing social issues, the Church helped revive the Belarusian language, published the country’s history and worked to preserve its cultural traditions. 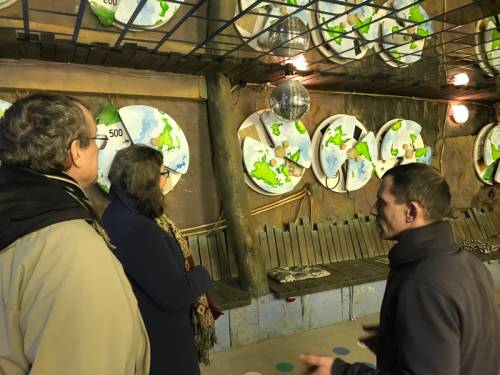 Al and Ellen Smith visit the ecology center set up for school children in Belarus. (Photo courtesy of Ellen Smith)

During the travel study seminar, the group visited an ecological project set up for school children to teach them about climate change, recycling and caring for the planet.

“The group also saw a fascinating, creative, wonderful place supporting families with handicapped children. It’s so difficult in that part of the world to have a handicapped child,” she said. “They are so marginalized, so rejected by society. Here they could take part in horse therapy and art therapy. One of the ways they supported the ministry was by bringing in artists to paint scenes of daily life. Then they would sell the paintings.” 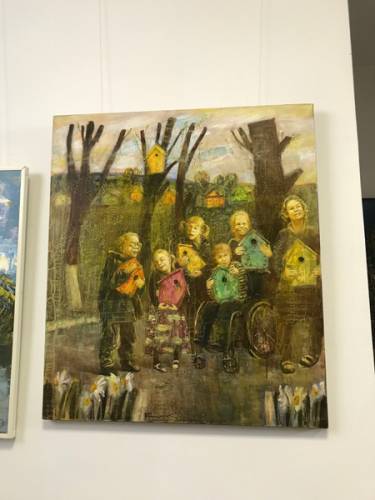 One of the donated paintings to be sold to fund ministry in Belarus. (Photo by Ellen Smith)

Smith and partners hoped to organize a peacemaking camp with Russian and Ukrainian children, but COVID-19 stopped the planning. She said Lukashenko mostly ignored the spreading virus, so it wasn’t safe to do it there and no one knows when it will be.

“They are remarkable people,” she said. “Lukashenko is trying to play the protests as Western influence, but it’s not, it’s the Belarusian people. They are overcoming their fear and exhibiting great courage. They don’t know what is coming. They don’t know that they’re safe. But they are not quitting.”