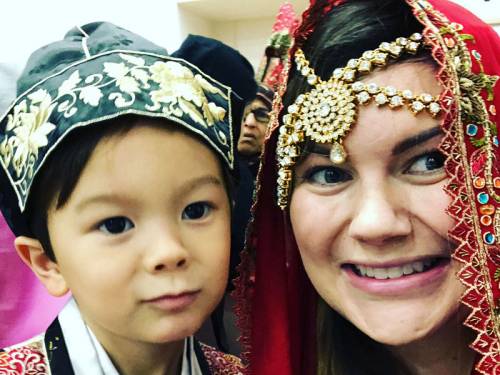 LOUISVILLE — Alexis Presseau Maloof, who teaches English at a private Islamic school, is an engaged member of the United Presbyterian Church of Peoria in Peoria, Ill. Currently she is serving as a ruling elder in her church and was the co-chair of the Pastor Nominating Committee for a new pastor that just recently wrapped up. Maloof has also been a member of her congregation’s Missions Committee, taught adult education and led a racial justice book club discussion on Debby Irving’s book,  “Waking Up White.”

Maloof has become prepared for her involvement and leadership in her congregation in a number of ways. One way she’s been equipped by the national church is through her participation and attending the Advocacy Training weekend in 2017 which included the Ecumenical Advocacy Days (EAD) conference and Congressional Lobby Day as well as the Compassion, Peace & Justice Training Day.

Maloof is one of the young Presbyterian women sponsored by the Racial Equity & Women’s Intercultural Ministries (RE&WIM) of the Presbyterian Mission Agency who attended the event. She has since used what she learned during the advocacy training weekend to make an impact in her community and her congregation.

Maloof says during her time at the advocacy training weekend she gained an understanding and knowledge of the many avenues she has as a citizen to communicate with her local and federal government in pursuit of more just policies.  “It was a great way to dive into understanding how and why the church makes a social policy witness and to practice doing advocacy by lobbying my local representative in Washington, D.C.,” she said.

“Spiritually, I was drawn closer to understanding that faith is personal but not private. Having a strong spiritual and theological backbone to my witness and advocacy is key for me as a woman of faith,” said Maloof. “When I remember Christ, it isn’t just to be grateful for all Jesus has done for me personally. My remembrance must have an effect on my actions. As a Christian, I cannot accept the world as it is and must live my life to make a difference for the sake of God in the world.”

The Women’s Leadership Development and Young Women’s Ministry of RE&WIM utilizes events like Ecumenical Advocacy Days to groom and better prepare Presbyterian women of all ages for leadership roles at every level of the Church.

“At the time of the training, I was on a committee in my congregation that was working to bring a refugee family to our community and help them adapt and settle,” said Maloof. “The family was due to arrive in the U.S. the weekend after I attended the conference, so I was extremely grateful for the sessions I attended on welcoming refugees.

“From the session,” Maloof said, “I became connected with resources and experts, which in turn helped me return to my committee with fresh insights and knowledge so that we could be allies and advocates for this refugee family.”

“The goal of the Young Women’s Leadership Development and Young Women’s Ministries is to provide resources and leadership opportunities to young adult women who are considering leadership roles in the church,” said Jewel McRae, associate for the ministry area. “The year Alexis attended EAD the theme was ‘Confronting Chaos and Forging Community.’ Unfortunately, today we still deal with chaos and the need to forge togetherness in many of our communities. This is the chaos and divisiveness that leads to racism. As people of faith we are to speak and be actively engaged in dismantling racism.  The work that Alexis is doing in the Islamic school is an answer to the Matthew 25 invitation and I’m so proud of her.”

Not only has the training and skills Maloof acquired at EAD helped her with in leadership roles in her church, but the information and skills gained have been transferable into her professional realm.

“At EAD, I learned more about the ways in which policies have a direct and material effect on oppressed populations within the U.S.,” she said. At the Islamic school where she works, “I teach some wonderful, engaged students, many of whom have family ties in so-called ‘Muslim ban’ countries. Because of this and simply because of the many intersections of their identities as Muslim young adults of color, politics and specific government policies come up often.”

“EAD has helped me feel empowered to help my students talk about citizenship, voting, and the way policies can and do have moral meaning,” she said.

Maloof, who majored in religious studies as an undergraduate and attended the University of Dubuque Theological Seminary, says while she didn’t feel a call to parish ministry, she sees herself working in the church professionally in a non-ordained ministry at some point in her life.