Once served, now they are serving 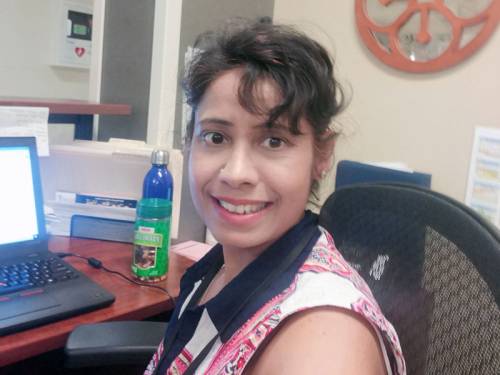 Neetu Sinha is on the visioning team of a new worshiping community in Lafayette, Indiana, called “A Work in Progress.” Courtesy of Neetu Sinha

Neetu Sinha remembers how alone she felt during the fall and winter of 2015. An immigrant from India, she’d been in the U.S. for more than a year. But the freedom America promised was not realized for her. She was in a toxic relationship: not able to do anything without the permission of her husband. Despite having a master’s degree in physics, she wasn’t allowed to work.

On Oct. 30, 2015, a conflict broke out in her home. Police charged Sinha’s husband with domestic violence. Shocked and in isolation, Sinha separated from her husband. She didn’t apply for a divorce at that time, but she did take advantage of free counseling offered by the prosecutor’s office in Lafayette, Indiana. That’s when she met the Rev. Susan Brouillette, who welcomed Sinha into her family’s home during Christmas.

“I don’t have any idea where I would be or what would’ve happened to me without her support,” said Sinha.

As the founding director of Lafayette Urban Ministry’s (LUM) Immigration Clinic, a confidential immigration law services provider, Brouillette had previously worked for former U.S. Sen. Richard Lugar, R-Indiana. For 28 years, she helped people obtain visitor, employment and family-based visas. She considers her work in obtaining visas, as well as her job at LUM, as ministries within the community.

Brouillette began introducing Sinha to people in the community who had a heart for immigrants, particularly those who were vulnerable to violence, abuse and exploitation. “LUM became the spoke inside the wheel, if you will, of caring for Neetu,” said Brouillette.

For five years, Brouillette arranged funds for Sinha’s living expenses, including two years of her rental costs. Brouillette also introduced Sinha to three different families that graciously provided her housing in their homes.

In 2018, Sinha finally got a divorce. Her ex-husband was ordered to pay alimony but has never paid her anything. All her valuable possessions are at her former in-laws’ home in India, where she lived with her husband before coming to the U.S. She doesn’t think she will ever get all of them back, but says she doesn’t need them now. Brouillette remembers how brave and strong Sinha was after she had lost everything.

“She was completely dependent on God’s grace and the people who immediately connected with her and wanted to help her,” she said. “With everything from housing to doctor’s appointments, I’m in awe of the village that formed around her.”

Calling Sinha an incredibly welcoming, caring and genuine person, Brouillette says Sinha naturally brings people together. After a few months as an LUM client, Sinha began volunteering at LUM’s Good Samaritan program, teaching Brouillette and others along the way that ministry is reciprocal — and about the importance of welcoming the stranger.

“Neetu has taught me so much about her culture and what it is like to be a foreigner in a foreign country,” Brouillette said. “In turn, I am more culturally aware and have a better understanding of the immigration experience.”

Brouillette is now in the process of starting a new worshiping community currently being called “A Work in Progress.” It will be a place, Brouillette hopes, for those who are spiritual but not religious and who want to make the world a better place.

“I see it as radically welcoming and accepting of everyone,” she said, “especially those who are not comfortable in a traditional church.” She also hopes that A Work in Progress will speak truth to power and, borrowing from an oft-used phrase, “comfort the afflicted and afflict the comfortable.”

Sinha — with her strong faith as a practicing, devout Hindu and being comfortable in a Christian church — is on the visioning team and already making valuable contributions to the identity and mission of the worshiping community.

“She’s at home with monotheism and the commandment to love God and one another,” Brouillette said. “Together we are all nurtured to grow and live as our authentic selves: the selves God blesses abundantly so that in all things and at all times we have all we need to become who God intends us to be.” 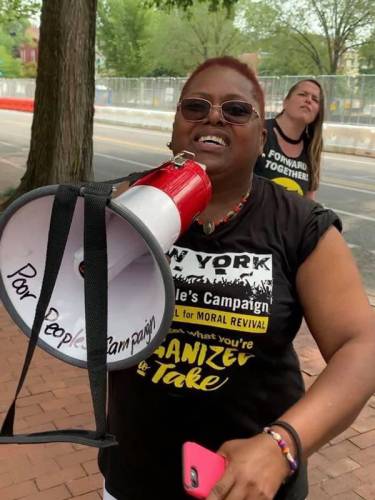 Arelis Figueroa, an immigrant from the Dominican Republic, is using her God-given talents to advocate for the poor. Figueroa, who came to the U.S. in the 1990s, joined the “Poor People’s Campaign: A National Call for Moral Revival” in 2018. Courtesy of Arelis Figueroa

As Sinha lends her voice to a new worshiping community seeking to support those not comfortable in traditional church settings, Arelis Figueroa, an immigrant from the Dominican Republic, is using her God-given talents to advocate for the poor. Figueroa, who came to the U.S. in the 1990s, joined the “Poor People’s Campaign: A National Call for Moral Revival” in 2018. The campaign — which is rooted in the work that began in 1968 when the Rev. Dr. Martin Luther King Jr. and other leaders called for the “revolution of values” — is today co-chaired by the Rev. Dr. William Barber II and the Rev. Dr. Liz Theoharis.

Two years after joining the campaign and just as the coronavirus pandemic began, Figueroa met Theoharis, who was starting a new worshiping community online called the “Freedom Church of the Poor.”

“What my community needed was to have worship services and hear about the campaign in the language of our hearts,” said Figueroa.

Listening to Figueroa — who herself had experienced poverty at the tender age of 16, and then, as a grown woman with two children, lived in a shelter in New York City — Theoharis accepted the challenge of starting a Spanish-speaking Freedom Church of the Poor.

“She is one of the dozens and dozens of leaders who have experienced poverty or are low-income that are building Freedom Church,” Theoharis said. “She has been organizing people around housing, immigration and poverty issues to help liberate the whole person. With a brilliant, deep love for humanity, she brings God into everything.”

Studying Black, womanist and feminist theology at Union Theological Seminary, Figueroa graduated with an M.Div. Now she continues her community work serving immigrants and people affected by drug abuse, domestic violence and mental health concerns at grassroots organizations like Rural Migrant Ministries at the Dominican Women’s Development Center and as an associate pastor at a Lutheran congregation.

“In my community and pastoral work, I really witnessed firsthand people living in poverty in the U.S. — the richest country on earth,” Figueroa said. “I started asking, ‘Why?’ ‘How?’ and ‘What can we do?’”

As a leader of La Iglesia Del Pueblo, Freedom Church of the Poor’s sister church, Figueroa is working with committed people from all walks of life to change the narrative around poverty, which is caused, she says, not by a lack of integrity from those experiencing being poor — but rather by policies made by those of privilege.

“As King taught us, a strong movement of the poor and disposed in society will make the system say ‘yes’ to our demands when it is their desire to say ‘no,’” she said. “The Latinx, Spanish-speaking community is now part of the many voices that are changing the narrative about those experiencing poverty in the U.S. — and around the world.”

La Iglesia Del Pueblo now includes leaders of the Poor People’s Campaign from around the county. Figueroa and others are also reaching out to people in countries like Venezuela, the Dominican Republic and Ecuador to bring more international voices into the movement. 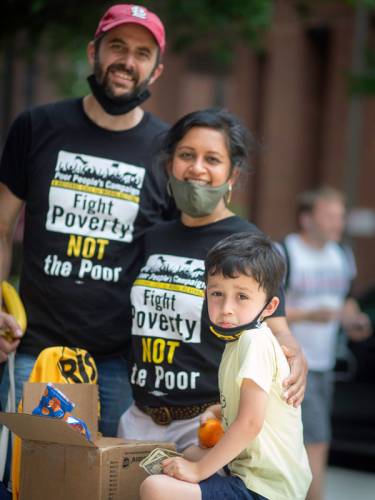 Adam Barnes (far left) is the director of religious affairs at the Kairos Center, an organization
seeking to eradicate poverty, which is housed at Union Theological Seminary in New York City. Courtesy of Adam Barnes

For Theoharis, the Freedom Church of the Poor works with grassroots organizations that are engaged in the work of justice in their communities, especially with those who are experiencing poverty while engaging in the world. To tell the story of the Freedom Church is to tell the impact of such organizers like Adam Barnes, director of religious affairs at the Kairos Center, an organization seeking to eradicate poverty, which is housed at Union Theological Seminary in New York City.

Before Kairos, while serving with his partner in Niger, which is one of the poorest countries in the world, Barnes saw the failures of organizations and governments trying to deal with extreme poverty alongside Sufi Muslim leaders providing resources for education and health care. “I saw how religion could be practiced. There was nothing abstract about it; they were living out their faith,” he said.

Returning to New York, Barnes enrolled at Union Seminary where he met Theoharis and other movement leaders who had decades of organizing experience. He learned that to end poverty and racism in the U.S. he must start organizing communities that are religious and spiritual.

“We must confront the forces in society that keep the poor, poor, and the rich, rich,” he said. “As I discover theology in the struggle, I’m a lot clearer about what I think was going on in Jesus’ ministry. God is not some benevolent guy that likes poor people. Rather, God is alive in the world and universe where the fullness of life is being denied and in the struggle to get it back.” 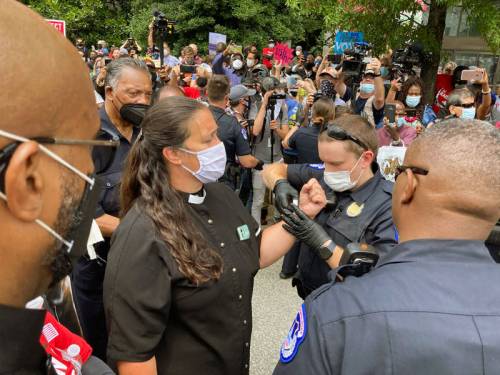 For Barnes, Freedom Church of the Poor, at its core, is not a phrase they came up with. It was inspired by King, who coined “freedom church of the poor” in one of the many civil rights speeches he made. Today, Barnes says that he has noticed as the narratives of the poor are being retold truthfully, more people are “waking up” and realizing that they are not working hard enough to help eradicate poverty.

“The reality is that 140 million people are either one check away from, or below the poverty level,” he said. “That’s 40% of our population, and two-thirds of the world is in poverty.”

Back in Lafayette, Indiana, Brouillette hopes that members of the new worshiping community she’s starting will honor and appreciate others who do not share the same beliefs, but find commonality in their desire for shared community and a just world. Having honed confidence and inner strength from incredible hardship and loss, Brouillette says Sinha can be incredibly compelling when she speaks.

“For me, it took a long time to heal my heart and bruises. Whenever I talk about my past, I get very emotional. I never believed domestic battery would have happened to me here,” Sinha said. “I was a housewife, staying home all the time. But this country, in particular my community, gave me happiness and accepted me with love. I have very nice friends. Every day I say thanks to God for blessing me with a wonderful life here.”

Brouillette adds, “Neetu will be a safeguard rail in the worshiping community. When it veers toward becoming insular, she will remind us to be truly welcoming.”