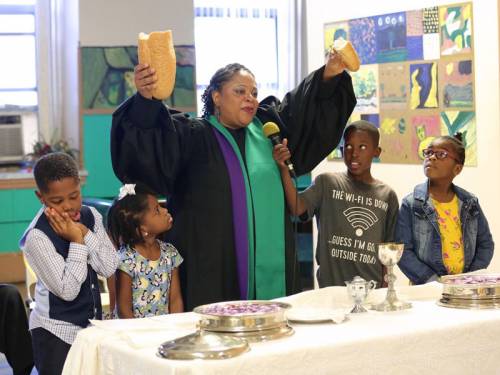 The Rev. Eustacia Moffett Marshall, pastor of West Philadelphia Presbyterian Partnership, is beginning a new stewardship conversation, one that challenges an emphasis on “abundance.” Erin Dunigan

Our culture has convinced us that abundant life is about getting more — anything that’s newer and better — and getting it sooner. The urge to consume now and pay later is often fed by a fear of scarcity and the myth that if we don’t own the latest and greatest (insert item here) we will be left out of the crowd.

Advertising feeds this myth. The average person in the U.S. can be bombarded by thousands of ads each day. Ads often work by implying that our lives are unfulfilled, that we somehow need every excess we want. All that excess has fueled a recession-proof industry — storage units. In fact, storage units have become a booming $38 billion business in the United States, with roughly 2 billion square feet of rentable space available. Storing these purchased treasures doesn’t come cheap. About 1 in every 10 households rents a self-storage unit, paying an average of about $90 per month.

While our culture’s consumerism contrasts with the abundant life Jesus spoke of, it has unfortunately weaseled its way into the church, with congregations often talking in terms of either “abundance” or “scarcity.”

Words like “abundance” and “scarcity,” though, are not helpful when it comes to talking about stewardship. Let’s start with the problem with “scarcity.”

Scarcity is like a game of musical chairs. In that game, there is one fewer chair than the number of players — so when the music that is playing ends, there is a mad scramble for a chair. The one who doesn’t get a chair quickly enough is eliminated from the game. The game is competitive and at times even brutal. From an early age we are programmed to compete — to get that last chair remaining. There is a sense of win or lose, of those who have and those who have not. The scarcity mentality can plunge those in the church, who are called to have faith and not fear, into toxic suspicion and bitter competition.

Another problem with scarcity language is that it can become a self-fulfilling prophecy when it leads to feelings of inadequacy and the belief that nothing can be done about one’s situation. Myths and mindsets like these can reinforce doubts in the church that God will provide for us.

Lynne Twist, the author of “The Soul of Money,” illustrates this when she writes: “Our first waking thought of the day is ‘I didn’t get enough sleep.’ The next one is ‘I don’t have enough time.’ Before we even sit up in bed, before our feet touch the floor, we’re already inadequate, already behind, already losing, already lacking something. And by the time we go to bed at night our minds race with a litany of what we didn’t get or didn’t get done that day.”

Abundance language in the church is no better, for recognizing that God provides for us out of God’s abundance does not dissolve our struggles. The abundance mentality can also lead to a nuanced form of prosperity gospel, which attributes material scarcity to a lack of faith.

The other danger with the word “abundance” when used in a church context is that it does not resonate with everyone. There is true need in society — a need for resources, opportunities and security. And this reality hits hardest for many groups: people in historically exploited communities of color, cities in decline and young adults facing a changed economy. What happens then to the faith of an individual or an organization when God’s abundance seems to be withheld from them and needs never get fulfilled?

If churches are to be welcoming places of worship for all, congregations must realize that the language used when talking about stewardship, especially when using “abundance,” can be offensive at worst or can simply not resonate with many communities, especially communities of color. So-called abundance may not ever be available or attainable — and the terminology may lead to feelings of failure or a loss of faith if abundance is emphasized.

Abundance may not even be desirable for all people, says the Rev. Eustacia Moffett Marshall, pastor of West Philadelphia Presbyterian Partnership.

“There are communities and cultures that do not assume the dominant Western/U.S. values of material-driven abundance,” she said.

Marshall, who recently joined West Philadelphia Presbyterian Partnership, will be experiencing firsthand how the language of stewardship is not universal, and how perceptions can differ. After two years of prayer and discernment, the partnership recently brought together three congregations in the Presbytery of Philadelphia — First African Presbyterian Church, Calvin Presbyterian Church and Good Shepherd Presbyterian. How to talk stewardship to this diverse body of Christ will be a priority for Marshall. One thing’s for sure: “Abundance” will not be a popular word in her vocabulary.

“The language and theology/ideology of abundance can be used to perpetuate economic inequities and to justify greedy exploitation of others,” she said. “We have seen this kind of exploitation in history through the genocide of Native Americans, through chattel slavery, and we see it at play through our current prison industrial complex and income disparities.”

Marshall points to the work of Old Testament scholar Walter Brueggemann, who insightfully considers the U.S. economy through the lens of the Old Testament.

“He describes our economy as an ‘economy of extraction,’ which is designed to extract from the most vulnerable through high-interest debt, regressive taxes and other means so that the rich become richer and more abundant, and the poor become poorer,” Marshall said.

The Rev. Larissa Kwong Abazia, who served as vice moderator of the 221st General Assembly (2014), now spends her days on what might be best described as her passion project — researching how fundraising and stewardship are done in communities of color, and how programs and language used need to change.

Kwong Abazia serves as project manager for the Collective Foundation, a nonprofit organization spearheading research on fundraising practices in Christian communities of color. Kwong Abazia says the project is important because “quite simply, this research doesn’t exist.”

“And because it doesn’t exist, we keep teaching stewardship in the church based on limited and biased information,” she said.

The Collective Foundation is part of the Vandersall Collective, a network of consultants founded by Mieke Vandersall to help churches, faith-based organizations and nonprofits. In the fall of 2015 a five-member team from the Collective Foundation discussed the need for data from contexts that reflect the diversity of the United States and that celebrate their unique voice and witness. After over a year of discussions with various denominational bodies and other religious entities, it became clear that “religious fundraising professionals who seek to celebrate God’s diversity in the church are ill-equipped to serve in ways that disrupt established, white-dominant norms within congregational walls,” Kwong Abazia said.

The Collective Foundation expects to release its initial findings in early 2020. The Presbyterian Foundation has funded a portion of the study.

Sufficiency is the word

In conversations among church leaders about stewardship and generosity, there is a new word emerging that is more welcoming and more faithful to the life that Christ calls the church into. That word is “sufficiency.”

The word “sufficiency” suggests serenity, tranquility and contentment — words that have the power to reframe a church’s financial narrative.

Sufficiency is also rooted in the Bible, with an example of God’s sufficiency in Exodus. There, God provided daily for the people wandering in the desert, sending manna to eat. The catch was that the manna would spoil after a day, so they could not store it, and thus they relied on God every day. In Exodus 16:16–18, God instructs the people to measure the manna with a device called an omer (which held about two quarts) for each person, so that there would be enough for each person.

But how do you apply the concept of sufficiency in a practical way to your stewardship program? Today’s pastor might choose language about “being content with enough or releasing anxiety about not having enough,” Marshall said.

In the end, having a sufficiency mindset can lead all to live more simply, to experience more contentment, to live with greater gratitude and generosity, to recalibrate lives to what God desires, and to use resources for God’s purposes, and by extension, the common good.

Maybe such an approach to allocation, to stewardship of the resources available, is what Jesus meant when helping us transform our ideas of abundant life.

David Loleng serves as director of church financial literacy and leadership at the Presbyterian Foundation. He has more than 20 years of ministry experience in Presbyterian churches in California and speaks about evangelism, discipleship, missional life and culture at conferences, camps, synods, presbyteries, retreats and churches.

The Rev. Eustacia Moffett Marshall suggests the following Scripture passages that center on sufficiency and that can provide stewardship themes for the church:

Philippians 4:19 — And my God will fully satisfy every need of yours according to his riches in glory in Christ Jesus.

Hebrews 13:5 — Keep your lives free from the love of money, and be content with what you have; for he has said, “I will never leave you or forsake you.”

Luke 12:18–21 — Then he said, “I will do this: I will pull down my barns and build larger ones, and there I will store all my grain and my goods.  And I will say to my soul, ‘Soul, you have ample goods laid up for many years; relax, eat, drink, be merry.’” But God said to him, “You fool! This very night your life is being demanded of you. And the things you have prepared, whose will they be? So it is with those who store up treasures for themselves but are not rich toward God.”