Peace & Global Witness Offering: passing the peace of Christ to all 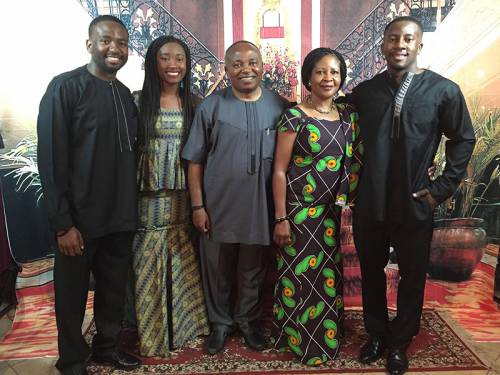 The Rev. Princeton Abaraoha, center, who once carried a gun as child soldier in Nigeria, is thankful for the gifts to the Peace & Global Witness Offering. The gifts help children in war-stricken countries. Courtesy of the Abaraoha family

Princeton Abaraoha was a carefree 13-year-old boy when he was snatched by soldiers and taken to a military training camp. Two weeks later, he was carrying a gun as a soldier in Nigeria’s civil war.

“I was going to fetch water for my mom when they grabbed me, and I didn’t see my family again for 2½ years,” he said.

The secessionist state of Biafra had conscripted him for service in its unsuccessful war to gain independence from Nigeria during the 1960s.

As the war in Nigeria progressed, Abaraoha was trained as a munitions and explosive device specialist. One hot, sunny afternoon, his unit came under heavy fire, and an unexploded rocket landed nearby. While Abaraoha attempted to defuse it, the rocket detonated, and he sustained multiple wounds. Over the next year and a half, he endured six surgeries without anesthesia. He came home at age 17 and started high school, but his wartime experience left him angry and rebellious. He drank heavily, and he says many considered him a “terror to society.” His life changed, however, after professing his Christian faith for the first time at an Anglican high school he attended.

“My mom said God changed a heart of stone into a heart of flesh,” Abaraoha said.

Eventually, Abaraoha came to the United States to attend college. It was then that he sensed a call to ministry. Today, Abaraoha is pastor of First Presbyterian Church in Midlothian, Texas, and serves the national church as a field staff member for the Presbyterian Mission Agency’s Intercultural Ministries.

While Abaraoha’s story has a happy ending, there are many children whose lives will not. Unfortunately, the use of child soldiers continues today. UNICEF estimates that tens of thousands of children worldwide are currently fighting in armed conflicts.

“Using child soldiers is an evil that we need to exterminate. We need to call attention to any system that supports this evil,” Abaraoha said. 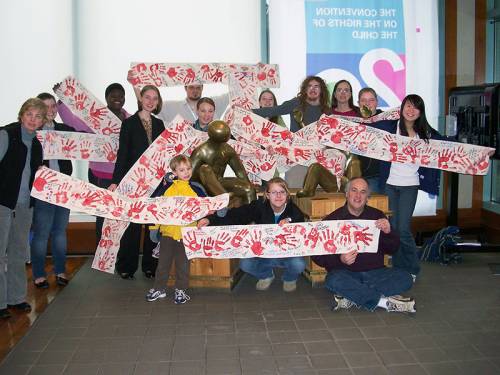 Gifts to the Peace & Global Witness Offering can help the Presbyterian Mission Agency do just that. For example, because of these gifts, the Presbyterian Ministry at the United Nations can facilitate congregational involvement in the Red Hand Day Campaign. This international initiative seeks to persuade countries to stop using children in warfare.

In conjunction with the campaign, Presbyterians across the country have sent prints or paper cutouts of red hands along with an accompanying note to the Presbyterian Ministry at the United Nations. The hands and a cover letter are then sent to officials in countries that have yet to sign a U.N. protocol that forbids the use of child soldiers. To date, 167 countries have ratified the protocol while 30 have not.

Working with global partners, the PC(USA) is involved in initiatives around the world aimed at ending children in combat, sex trafficking, forced labor and other types of human trafficking. Several mission co-workers are also involved in anti-trafficking work, including Cathy Chang in the Philippines, who devotes full-time work to the human trafficking issue.

Closer to home, Peace & Global Witness Offering gifts are helping congregations bear witness to peace in their neighborhoods. This happened last year in Jersey City, New Jersey, in the aftermath of the racially charged violence in Charlottesville, Virginia.

Like many other Americans, the Rev. Jon Brown experienced the shock waves of fear and grief that swept across the United States on that August weekend. He was distraught to the point of numbness. However, on the following Monday morning his hope was renewed, a restoration brought about in part through the Peace & Global Witness Offering.

His spirits were lifted by dozens of elementary-aged children who had gathered for Peace Camp at the church he serves, the Old Bergen Church in Jersey City.

“To see children of different races, ethnicities and faith traditions singing and laughing together was a powerful medicine for all of us in that moment,” Brown said.

The four-day event, which had been planned for months, drew nearly 100 children. It was sponsored by Christian congregations, a synagogue and a mosque in Jersey City, which is one of the most ethnically, racially and religiously diverse communities in the United States.

The children learned ways to resolve conflicts and to handle angry and sad feelings. They brainstormed about what is needed for a good neighborhood and built model neighborhoods out of cardboard boxes and other materials. They heard from guest speakers, including a police officer, librarian, teacher and a public health official, all of whom told the children how they could help others.

The camp’s themes were adapted from a curriculum published with support from the Peace & Global Witness Offering. The curriculum, Building a Neighborhood Together, draws a connection to Mister Rogers’ Neighborhood, a PBS program that was created and hosted by the late Fred Rogers, a Presbyterian minister.

Brigid D’Souza, the parent of two campers and one of the camp’s adult leaders, called it “a really important gift” to her children and other campers.

“When I was growing up, I didn’t attend Bible study camp, so for me it was informative to see what this type of camp could mean for kids,” she said.

Many congregations and mid councils use gifts from the Peace & Global Witness Offering to put creative ideas like Peace Camp into action. Twenty-five percent of the Peace & Global Witness Offering is retained by congregations for local ministries of peacemaking and reconciliation, another 25 percent supports such ministries at the mid council level, and 50 percent goes to the peacemaking and reconciliation ministries of the Presbyterian Church (U.S.A). A portion of the gifts to the national church helps the PC(USA) reach out to people who long for peace and reconciliation. As unlikely partnerships take shape, people carry each other’s burdens, advocate for one another and share each other’s hopes.

Members of the PC(USA) and the Church of Jesus Christ in Madagascar (FJKM) shared such an experience this past year through a travel study seminar.

Madagascar is an island nation located 250 miles off Africa’s east coast. Due in part to years of unsustainable development practices, the country suffers greatly from poverty and government instability. Despite this, the churches’ efforts to alleviate hunger and promote democracy offer much hope.

“The church there is so alive. It is active and caring, and they encouraged us to be more faithful,” said Lucy Janjigian, a longtime mission advocate in Los Altos, California.

Seminar participants were inspired by the agricultural, educational and health care ministries that the Church of Jesus Christ in Madagascar and Presbyterian mission co-workers do together. The participants are now sharing the story of the Malagasy people and are calling Presbyterians to deepen their commitment to them. Particularly, they want Presbyterians to advocate for an end to the current practices of stripping the country of natural resources without replenishing them, often done in the name of development.

The seminar participants’ convictions were deepened by the people-to-people contact. “I can see the faces of the people,” Janjigian said. “It makes it so much more alive.”

At the FJKM’s Ivato Seminary, students empathized with some hardships that Janjigian herself has endured. Janjigian gave an account of her family fleeing Jerusalem during the 1948 war and talked about the ongoing struggles in the Holy Land.

“I was very surprised by the violence people there have experienced and was very sad to hear what was happening,” said seminary student Ravo Vonialisoa.

Her resolve was strengthened by her Presbyterian visitors.

“I realize now that the Church of Jesus Christ in Madagascar is not alone. I will share this with the churches I serve so they know that there are many around the world praying for us,” she said. “I feel a greater connection to the worldwide church.”

Gifts to the Peace & Global Witness Offering are traditionally received the first Sunday in October, which is World Communion Sunday.