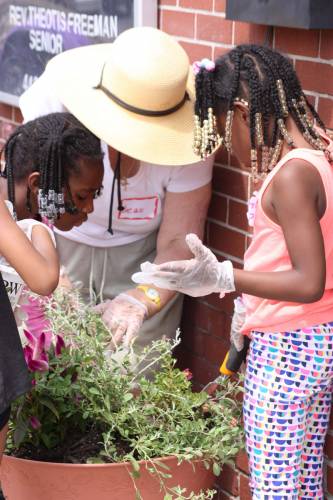 Hunting Ridge Presbyterian Church in Baltimore is part of the city’s Rosemont Community Interfaith Coalition, which provides a safe place for children to learn and play. Courtesy of The Center

For five weeks during the summer, nearly 50 youth in West Baltimore can be seen working on their reading and math skills, or they might be packing up for a day on a local farm or at an area museum. It’s all part of the Rosemont Community Interfaith Coalition, which is focused on ending the violence in the Maryland city by offering positive experiences and hope for youth.

“The goal is to provide ongoing healthy and safe opportunities for children and youth in that neighborhood where a lot of families are afraid to let their kids be outside freely because of danger,” said the Rev. Deborah McEachran of nearby Hunting Ridge Presbyterian Church, which is part of the coalition. “We want to provide good role models of adults who care. I feel by doing that, we are communicating the gospel.”

Hunting Ridge, which is a little over a mile from where the summer camps are held, is one of seven faith-based groups in the area that make up the coalition. Hunting Ridge originally got involved in the area through a movement to help “take back the street corners” in August 2014.

“They were trying to encourage people in the community to come out and say, ‘Hey, this is a corner where we’re not going to allow violence to be,’ ” McEachran said. “We participated on one of the corners and then made a decision as a church that we wanted to continue going to the same corner every Friday.”

While the summer camps have been occurring for the past four years, this year was the first time it spanned five weeks. In the past, the weeklong camp was held outside and, in the evening, either on one of the city’s streets or in a nearby schoolyard. This year the camp took place in a church building in the neighborhood, running from noon to 5 p.m.

The seven contributing groups, which are Presbyterian, Catholic, Apostolic, two nondenominational congregations and two community ministries, supplied a leader for each week of the summer camp.

“It’s an interesting conglomeration of churches who are able to work together,” McEachran said. “Sometimes we find the going difficult, but we all see this as a valuable testimony to God’s work in our city.”

This year an academic component, including math and reading, was offered. Those lessons were prepared by a Hunting Ridge member. The camp also received some key support from the city of Baltimore in 2018 through youth workers, which the city hires each summer. The camp also teamed up with The Center, a ministry of the Presbytery of Baltimore that provides a place for out-of-town groups to stay and work with Presbyterian churches in the city. The Center assigned groups to help at the camp for two of the five weeks.

“That has been such a gift to see the connections between kids from out of Baltimore and kids from in Baltimore laughing, playing, singing and learning together,” McEachran said.

Hunting Ridge also added a unique element to the leadership of the camp when a Burmese congregation it hosts sent children and youth volunteers.

“It was such a beautiful picture of Asian faces, black faces and white faces,” McEachran said. “People in the neighborhood just loved seeing what they called the ‘United Nations’ in their community.”

The summer camps are only a part of the programming offered by the Coalition, as the youth that range in age from pre-kindergarten to eighth grade are also treated to things like movie nights, back-to-school activities and holiday-themed events throughout the year.

“We have tried to plan special events or trips to broaden their experiences,” McEachran said. “The first couple of years we went out to a farm. They got to see a wide variety of animals, went on hikes around the farm, played with tadpoles in the creek and went swimming.”

It all adds up to year-round activities that aim to create a better atmosphere and mindset for these West Baltimore children and youth and serve as a learning experience for the leaders themselves.

“God has enabled us to find the value in working together, even though we come from some different backgrounds,” McEachran said. “We’ve had some bumpy roads. There’s been some frustration. But the fact that people have hung in there and seen the value of this to me is God working through us.”

Mike Givler is the communications coordinator for the Synod of the Trinity in Camp Hill, Pennsylvania.