…be led forth in peace. (Isaiah 55:12). Support to the Peace & Global Witness Offering.
Make A Donation Click Here >
Home › What ‘the priesthood of all believers’ looks like 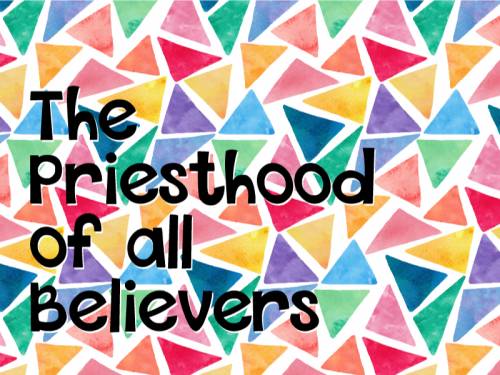 As we approach the fall kickoff to the church program year, my thoughts keep coming back to the Protestant idea of the priesthood of all believers. This doctrine teaches that because of Jesus Christ, there is no need for someone to act as a mediator between the people and God. Everyone is just as spiritual, just as capable of speaking to God, and just as called to deliver God’s message to the world. Everyone is equally called to do God’s work and to minister to God’s people.

The question, though, that many of the people in the church I serve ask is, “What does ministering look like if you’re not a minster?” The answer is complex, and it looks different for different people, but the short answer is that it looks like you serving others and showing God’s love as you go about your daily life.

The best example I have of this is a story of John and Raul. In 1986, they worked at the corporate headquarters of a retail chain in New York City. They were both supervisors and frequently spent 12-hour shifts working together. They developed a friendship. Eventually, John was promoted to manager. One day, John noticed Raul had a lesion on his right cheek and that he hadn’t been feeling well. Raul went to see a doctor in June and went out on disability. In August, Raul asked if he could come back to work, though he would need some accommodations because of his health. John, John’s boss and the vice president of the human resources department all agreed. However, Raul’s co-workers soon learned that Raul had been diagnosed with AIDS. They were afraid and angry that he was coming back to work.

How we can minister to each other will look different in our various contexts. Few stories will be quite like that of John and Raul. In my congregation, we seem to do a good job of taking care of each other. We’ll work out a schedule so that the person whose loved one is ill is never alone at the hospital. We bring meals to those recovering from surgery. We show up and eat cake with someone celebrating his birthday after coming through a major health scare a few months before. We show someone who has lost her spouse how to do the chores that her spouse had always done. We visit those in our community who are lonely, even if they have no direct connection to our congregation. The thing that gives me the most joy as the pastor is, I don’t normally organize these things. They aren’t a planned initiative to live out our faith. We’re just a bunch of people wanting to live out our faith.

Rebecca Lawson Putman is the pastor of Northville United Presbyterian Church in Northville, New York. She also serves as the co-chairperson of Albany Presbytery’s Committee on Ministry