First Presbyterian Church of Oshkosh, Wis., held its first Grillin’ on the Green two years ago. It runs weekly from June to August and welcomes 40 to 100 people. “There is a theological underpinning to grilling brats: our desire to be connected to one another,” said the Rev. Melodie Long. Courtesy of Melodie Long

Summertime, and the livin’ is easy.

American composer George Gershwin clearly wasn’t thinking about life in the church when he wrote his 1930s song “Summertime.”

For many congregations, summertime isn’t easy. Blue skies beckon people to mow, garden or hike rather than sit in a pew on a Sunday morning. Weekend getaways and family vacations also mean fewer volunteers available to provide child care, sing in choirs and host coffee hours.

For churches that don’t have a summer attendance problem, but rather experience an uptick because they are in a resort area, planning worship and offering activities for adults and children can be challenging when lay leaders and clergy might need some downtime themselves.

Whether it’s a slump or a surge, a church can take on a totally different look and feel from Memorial Day to Labor Day, which isn’t a bad thing, pastors say. Summer can be a season to experiment with new ideas — from changing the worship venue (by a lake or outside on the front lawn of the church), to transforming coffee hour into lemonade outdoors or hot dogs on a grill, to testing a new preaching style that involves more interaction from those in the pews.

Whatever it might be, the dog days of summer can be a wonderful opportunity to see and taste (did someone say s’mores?) the goodness of the Lord in ways that might even transform congregations in the seasons to come.

The Rev. Ann Aichinger wasn’t feeling too excited about the prospect of planning another year of Vacation Bible School. While VBS is traditionally the summer event for many congregations, Aichinger, who co-pastors Central Presbyterian Church in Bristol, Virginia, with her husband, Frank, wanted something different.

“We wanted to do something that would give us excitement,” she said. When Aichinger thought about the pros and cons of VBS, she realized that the first night (or day, depending on when a church holds VBS) “is always the best,” with a sense of anticipation and awe for how the time will be spent together.

“Wouldn’t it be great to capture that ‘first night’ feeling of VBS every week in the summer?” Aichinger mused. Her musings soon led to the creation of “Movies With a Message,” a Thursday night gathering where young and old could connect beyond Sunday mornings.

“Movies With a Message” is offering two movies with a message each week this summer — one for adults and one for children. The movies are not necessarily religious films, Aichinger said. Adults will watch “Won’t You Be My Neighbor?” about Fred Rogers. Children will be treated to films such as “Coco,” chosen for its cultural value, Aichinger says, as the Disney/Pixar movie explores the Mexican celebration of the Day of the Dead. A time for discussion follows for both adults and children, with the night ending with a joint craft. A media blitz, including flyers and social media, spread the word to the community, Aichinger says.

Aichinger has also invited the area’s food trucks to park in the church’s lot on Thursday nights.

“The food trucks will attract people and we can then extend the invitation for them to come inside for a movie and conversation,” she said. 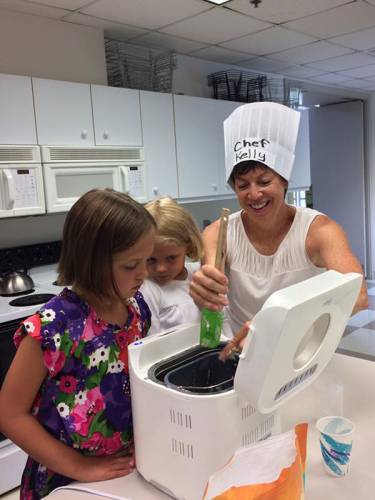 In many churches across the country, once the school year has ended, church school ends as well. While that’s a blessing for volunteers needing rest and renewal, if there is nothing for the children, some parents might choose to stay home on a Sunday instead. What’s a church to do?

Immanuel Presbyterian Church in McLean, Virginia, answered that question two years ago when it created the Summer Chefs program for children.

“We have no Sunday school in the summer as it is hard to get volunteers. We are in an affluent area and many leave to go to summer homes,” said the Rev. Susan Graceson, Immanuel’s associate pastor.

For those who do stay in town, it’s hard to get them to volunteer to help with the children because summer attendance is unpredictable.

“One week, we could have six children, and the following, 36 children. You just don’t know how to plan,” she said.

The Summer Chefs program grew out of the desire “to do something different in the summer for children” and to create something that was “flexible and fun,” Graceson says.

Noticing there were many who loved to cook in the congregation, Graceson saw the opportunity to blend the theology of food with the mission of feeding the hungry while tapping into the gifts of the congregation.

“It’s a combination of mission and fellowship,” Graceson said.

Each Sunday, Graceson “christens” the volunteer chefs for that day, bestowing them with white chef hats with their names written on them.

Before heading to the church kitchen, the chef — or chefs — of the week gather with the children for a children’s moment during the worship service. There, the children meet the chefs and hear stories about food in the Bible — such as the breakfast of fish prepared by Jesus and bread being broken at the last meal with the disciples. The children also engage in conversations about food and hunger. The food prepared is shared at coffee hour, with some dishes also shared at local shelters, Graceson says.

As for the unpredictability of who and how many will show up on Sundays, Graceson is always prepared with a “project in her pocket,” ready to adapt the cooking lesson, especially if there are very young children in the kitchen. For them, putting together a plate of cheese and crackers will keep them busy. Or even a bag of trail mix.

“The trail mix was easy to make. We invited the congregation to take bags to keep in their cars. We have a large homeless population, and so the trail mix could be given to others,” Graceson said.

Fire up the grill

While baptism and the celebration of the Lord’s Supper are the two sacraments Presbyterians recognize, there’s a third that the Rev. Melodie Long, transitional pastor at First Presbyterian Church of Oshkosh, Wisconsin, likes to remind people about: the sacrament of coffee hour.

Looking to translate the abundance of fellowship and food out into its downtown neighborhood, First Presbyterian decided to fire up the grill and offer the community a free weekly barbecue.

“Picnics and grilling are a big thing around here and we began thinking that there might be people who didn’t have a chance to grill,” Long said.

What was even better than offering burgers — well, more like brats, “this is Wisconsin after all,” Long says — was the location for the meal. A green lot adjacent to the church became the perfect space for people to gather.

“For a season, we are part of one another’s lives. There is a theological underpinning to grilling brats: our desire to be connected to one another,” Long said.

S’mores and some more ideas

Having fun while building community is always a good thing, and what can be more fun in the summer than gathering around a campfire for a night of storytelling and making gooey s’mores?

First United Presbyterian Church in Salem, New York, had a night of s’more making and turned it into a way to encourage children to pray. The “Prayer and S’more Prayer” night was held in the church’s parking lot, with a portable fire pit and chairs gathered around it. Rather than telling stories, prayers were lifted for those in their community.

The children at La Crescenta Presbyterian Church in Glendale, California, also enjoyed a s’more night one summer. The event was just one of many the church plans jointly with its child care center, the Center for Children.

“Every summer, we hold several gatherings as a way to bring together the families of the church with the families from the center that don’t attend church,” said Pat Murphy Chambers, director of the Center for Children.

The lack of synergy between a child care center on church property and the church is common, as many congregations wonder how to build relationships with the families whose children attend the center.

“We’re always thinking of ways to have both groups interact,” she said. One such way was to hold a Dr. Seuss night. Long church tables were arranged in a maze, which helped those attending to really mingle and meet other people, Chambers says. On the menu was green eggs and ham quiche. The movie “The Lorax” was shown for its environmental message, Chambers says, which sparked an idea to have a seed-planting table for a craft.

“It was a lot of fun, and what began happening is the church families and the families from the center who did not know one another started to make connections and also began discovering other friends they had in common,” Chambers said.

Summer fun isn’t just about food you can eat; it’s also about the food that feeds the spirit. This summer, the Rev. Julie Delezenne of First Presbyterian Church in Warren, Michigan, is doing a series of sermons on children’s questions. The sermons will be interactive, using videos of children asking their questions. Among those questions is one asked by Delezenne’s son.

“I had bought home leftover Communion juice and that’s when he asked, ‘Why is God’s blood purple?’ ” Delezenne said with a laugh.

But it wasn’t just her son that got Delezenne thinking. Last fall, five new families joined the church, four of them with young children, including one who had never-ending questions for his pastor. That’s when Delezenne realized that answering children’s questions could make a great sermon series. Delezenne took it a step further, contacting the moms she knew on Facebook and asking them to send videos of their children asking God questions.

Summer sermon series aren’t new for Delezenne. She tries do them every summer, she says.

“I’ve done one on dreams and dreamers, favorite Scriptures and even seven weeks of creation,” Delezenne said. “We don’t have Sunday school in the summer and so I want to make Sunday worship more interactive, interesting.”

Donna Frischknecht Jackson is editor of Presbyterians Today. She loves hearing about the creative ministries Presbyterians are doing. If you have a story to share, email her at donna.jackson@pcusa.org.