Share God’s love with our neighbors-in-need around the world through One Great Hour of Sharing. Give now.
Make A Donation Click Here >
Home › A woodcarver’s ministry of welcome 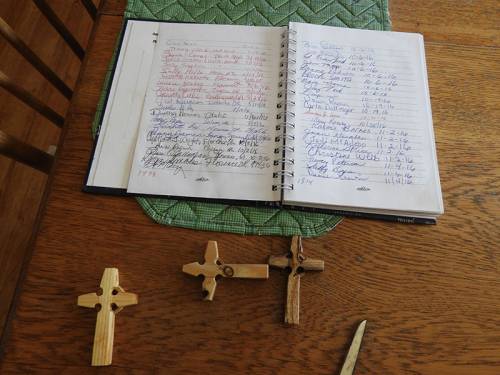 Andy J. LaTomme Jr. keeps a logbook to track how many crosses he has given out and to whom he has gifted them. The 99-year-old has collected 3,214 signatures in his logbook. That’s nearly 111 crosses per year. LaTomme began carving crosses nearly 30 years ago.

The Presbyterian Church of the Siuslaw in Florence, Oregon, displays a large Celtic cross on its property. That cross inspired a unique ministry for longtime church member Andy J. LaTomme Jr. For nearly three decades, the 99-year-old has been giving out wooden replicas of that cross to church members and visitors alike.

“I was intrigued by the church’s cross. I wanted to see if I could make one,” LaTomme said.

LaTomme has been a woodworker and carver since the 1960s. He has carved some beautiful pieces, such as an interlocking heart sculpture for his wife, Alice, who passed away in 2009, and the stand that holds the Christ candle in the church’s sanctuary.

LaTomme, who began carving the crosses in 1990, experimented with several designs and sizes. He eventually came up with a size that was perfect for a necklace.

Back then, a group of church members would get together at each other’s houses and share a meal together.

“We used to have these dinners for eight,” LaTomme said. “My wife and I had a group over and I decided to make crosses for all of the women.”

The next Sunday, the women wore the crosses to church. Everyone admired them and wanted one.

“When I started, I just wanted to do it as a gift for the church,” LaTomme said.

Over time, his crosses began going beyond the church to the local Elks Lodge and other organizations. LaTomme keeps a logbook to track how many crosses he has given out and to whom he has gifted them. In the past 29 years, LaTomme has collected 3,214 signatures in his logbook. That’s nearly 111 crosses per year.

“If they want a cross, they have to sign my logbook,” LaTomme said with a grin. 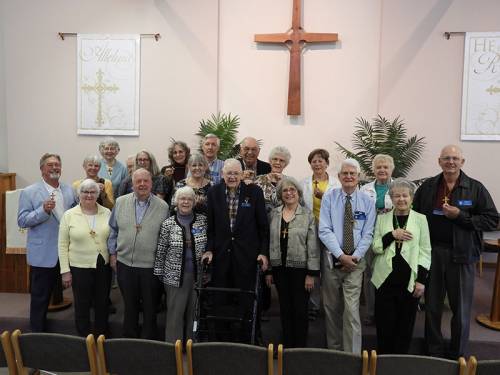 Just a few of the many people who have been honored to receive one of LaTomme’s wooden crosses. LaTomme often invites church visitors and new members to pick a cross from his collection.

But people don’t generally have to ask for a cross. LaTomme pays attention to new faces at Sunday worship and approaches them after church to offer a gift. Visitors and new members get invited to the parking lot, where he opens the back of his truck to reveal his collection of crosses. He dutifully fits the crosses with a lanyard and has recipients sign his logbook.

“When Andy invited me to his truck to offer me a cross, it made me feel like I was accepted into this congregation,” said Judy Madsen, who has been a member at the Presbyterian Church of the Siuslaw for several years and now serves on session. “It touched me that he noticed me.”

Recipients’ reactions to receiving the crosses vary from gratitude to exclamations about their beauty. People also ask how he makes them. These days LaTomme uses a Shopsmith woodworking machine to make the crosses. He stamps the year the cross was made on the back of each one. He also brands the back of the crosses with his initials. LaTomme generally makes the crosses out of myrtlewood, which is native to southwestern Oregon and northwestern California, but people often give him scraps of wood that he will use as well.

Another question people often ask is why LaTomme makes these crosses and gives them away. LaTomme says he simply enjoys doing so, and that the reactions and the gratitude are the payoff.

“For me, the cross is a reminder of God and Jesus and the friendship and love we are supposed to share,” said Jan Hausauer, who joined the church in 2018. “And I felt like Andy shared some of that love with me.”

Bev Weir, an active member of the church from 1981 to 2001, said that when she wears the cross, it reminds her of the church and all of the people she knew and loved. She said those memories will always be in her heart,  under the beautiful cross.

Cynthia J. Wright is a freelance writer and member of the Presbyterian Church of the Siuslaw in Florence, Oregon.