…be led forth in peace. (Isaiah 55:12). Support to the Peace & Global Witness Offering.
Make A Donation Click Here >
Home › How decisions get made at General Assembly

Discerning God’s will together 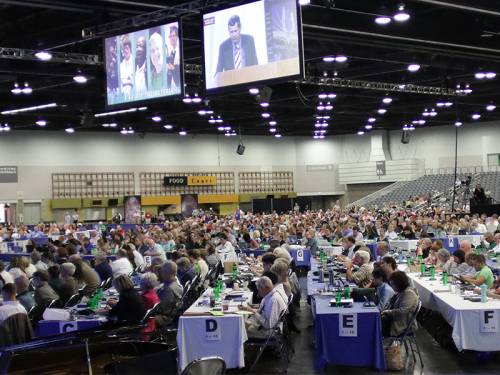 Commissioners in a plenary session at the 222nd General Assembly (2016). Paul Seebeck

This summer’s 223rd General Assembly will be my 41st. My first was in Portland, Oregon, in 1967 when, as a college student and cradle Presbyterian, I wanted to see firsthand the debate on the Confession of 1967. Since then, I have missed very few General Assemblies. Yes, I am a “GA junkie.”

But why am I a GA junkie? The Book of Order, G-3.0501, speaks for me: “The General Assembly constitutes the bond of union, community and mission among all its congregations and councils, to the end that the whole church becomes a community of faith, hope, love and witness.” That section continues: “As it leads and guides the witness of the whole church, it shall keep before it the marks of the Church (F-1.0302) … and the six Great Ends of the Church (F-1.0304).”

The General Assembly is the best way we have of expressing and living our union as Presbyterians in light of our theology, history and tradition as a church.

Over the years, I’ve heard way too many people talk about how “they did this” and “they said that” when talking about the General Assembly. Who are “they”?

The General Assembly is composed of commissioners — equal numbers of ministers and ruling elders — elected by their presbyteries. And so, “they” are in fact “us.”

These ministers and ruling elders are called “commissioners” — not “delegates” — because their commitment is to “reflect the mind of Christ … and the transforming love of God, enabling us to discern God’s will together” (Standing Rules of the General Assembly, Introduction). Commissioners do not represent their presbytery in the sense of voting the way they think their presbytery would. They participate in the process of careful discernment of what God through Jesus Christ is saying to the church today. That’s why prayer and worship are so central to the life of the General Assembly.

What is it about the pronouncements “they” make that stir so many Presbyterians to anger or joy? Business comes to the General Assembly in basically one of three ways:

1. Reports — Agencies, special committees and commissions of the General Assembly report on the work they have done since the previous General Assembly, to which they are all accountable. Most reports come in the form of “responses to referrals” in which a previous Assembly has asked that something be done, and the assigned agency reports back on how it has responded to the Assembly’s referral.

2. Overtures — Overtures are resolutions on various topics that have been submitted to the General Assembly by presbyteries or synods seeking action by the whole church. Every overture must receive concurrence by another presbytery or synod to be considered by the Assembly.

3. Commissioners’ resolutions — These are submitted by any two commissioners to the General Assembly on matters that are of great interest to those commissioners and which they believe have not been addressed in reports or by overtures.

As I reflect on all my years attending General Assembly, I can’t help but think of a comment I’ve heard too often: “The General Assembly doesn’t speak for me.” Of course it doesn’t. A fundamental tenet of Presbyterianism is that God alone is the Lord of conscience. Except in matters of constitutional law, decisions of the General Assembly are not binding on individual church members. But as the body that is called to be representative of the unity of the whole church, the General Assembly is charged with “discerning and presenting with the guidance of the Holy Spirit, matters of truth and vision that may inspire, challenge, and educate both church and world” (Book of Order, G-3.0501c).

Jerry Van Marter is interim director of communications for the Office of the General Assembly and stated clerk for the Presbytery of Mid-Kentucky.