Book explores both heart and history 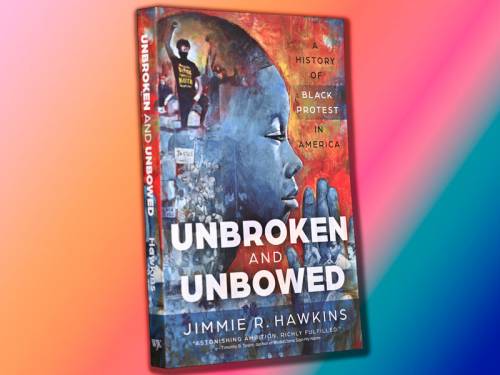 The Rev. Jimmie Hawkins’ book, “Unbroken and Unbowed: A History of Black Protest in America,” explores the heart and history behind Black protest and was recently released by Westminster John Knox Press. Rich Copley

When San Francisco 49er Colin Kaepernick knelt during the singing of the national anthem at the start of a National Football League game in 2016 in protest of police brutality and racial inequality in the U.S., a firestorm was ignited. As public criticism was heaped onto Kaepernick, the Rev. Jimmie Hawkins became concerned about the negative way the African American athlete was being portrayed.

“I kept hearing what he did was unpatriotic and that he was just bringing focus on himself. I wanted to challenge that,” said Hawkins.

Hawkins is no stranger when it comes to being a voice that challenges others to think more critically. It is a call he embraces in his work overseeing the Presbyterian Office of Public Witness and the Presbyterian Ministry at the United Nations. And this particular call to challenge that was sparked by Kaepernick morphed into an idea for a book that looks deeply into centuries of Black protest.

“Unbroken and Unbowed: A History of Black Protest in America” was recently released by Westminster John Knox Press. In it, Hawkins writes that the “Black protest movement did not begin with Colin Kaepernick. Far from it.” 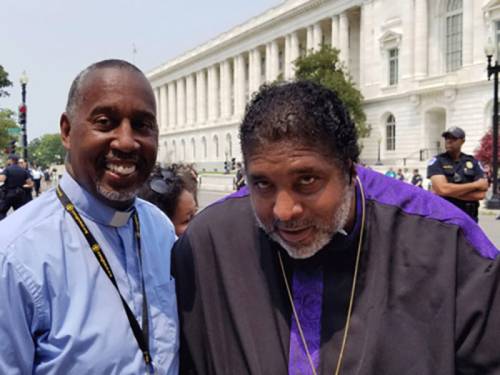 The Rev. Jimmie Hawkins is no stranger to protest as he joins the Rev. Dr. William J. Barber II, right, at a Poor People’s Campaign rally. Courtesy of the Presbyterian Mission Agency

“During every period of oppression, active, deliberate and ongoing movements have evolved to match the levels of oppression experienced,” Hawkins cites as he then takes readers on a journey from pre-colonial times to the modern era.

Despite the barrage of racism, “our spirit has not been broken,” Hawkins said. Indeed, “we still are here. We still are surviving. We still believe in America, but we also want to be very realistic with what we’re confronting when dealing with issues of race.”

In his job, Hawkins often takes part in protests and vigils against structural racism and other social ills. He hopes the book will be a catalyst for others to become active.

“I really do hope that it’s an inspiration, especially for young people,” Hawkins said, adding, “I think that the country is at a crossroads. We’ve got to understand that there are problems still in America. Problems with justice and systemic racism and discrimination against the LGBTQ community and discrimination against women. This is an opportunity to reshape this country into what it is called to be — a place where people are lifted up.”

Hawkins envisions his book being used as an educational tool on college campuses, as well as a vehicle to expand the personal knowledge base of Americans, who often know little about Black history except slavery and the Jim Crow era. Even then, with that knowledge, key details have gone missing.

“We know about Nat Turner and a few slave revolts, but there were more than 250 slave revolts in the United States. Historians have also basically written off the number of slave ship mutinies, but there were over 200 such mutinies, which led to insurance having to be taken out on slave ships because there was no guarantee the ship would reach its shores,” said Hawkins.

He contends in the book that Black protest has made the country better. “Black confrontation influenced the transformation of America from a slave-justifying nation to one that now recognizes the evils of slavery even as it grapples with the legacies of that same institution,” writes Hawkins. “The white population’s growing awareness that human rights are due to all people owes much of this awareness to Black resistance.”

Hawkins points to the Black Lives Matter movement as a recent example of that resistance, among others. “I wanted to focus on modern movements and talk about today’s athletes who are involved in protests and entertainers who are very engaged,” he said.

One thing not included in the book is a lot of Hawkins’ own stories — although there were plenty for him to relate to while researching and writing.

“I grew up during the dwindling period of Jim Crow. So, when I talked segregation in the school system, the 1954 decision and Brown v. the Board of Education, all of that resonated with me,” said Hawkins.

The involvement of the Black church and other faith communities in resistance efforts, such as the civil rights movement, also struck a chord with Hawkins, who believes in the continued involvement of churches in the fight for justice.

“It is the responsibility of those who have been blessed in so many ways. As a person of the Christian faith, we’ve got to be engaged to some degree — we got to say something,” said Hawkins. “We can’t just sit back, saying, ‘Well, God has blessed me and everything’s well between me and my God’ when there are people suffering all around us we pretend not to see. We’ve got to get in the game.”

Darla Carter is a communications associate for the Presbyterian Mission Agency.