Church delves into who they really are

Local Situation: A white congregation digs into its history to understand how to dismantle racism. 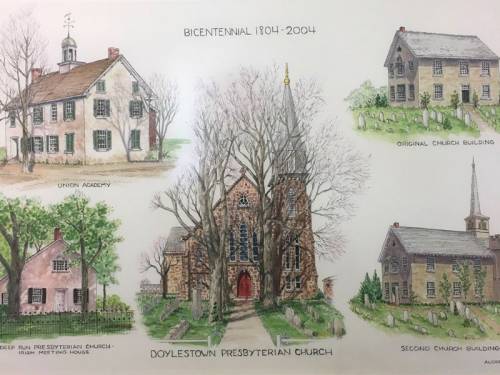 A year ago, Doylestown Presbyterian Church in Doylestown, Pennsylvania, accepted the invitation to become a Matthew 25 church. The congregation chose to concentrate on dismantling structural racism and eradicating systemic poverty. Members and friends knew they wanted to learn how to be allies with people of color who have been so adversely impacted by these issues, which are two of the three Matthew 25 focuses (the other is building congregational vitality). However, the committee leading the effort didn’t know where to start. Members determined that to be an effective Matthew 25 church, the congregation would “look at ourselves first,” said Beverly Jewusiak, moderator of the church’s Matthew 25 committee. Jewusiak said the committee first asked itself this question: “What do we know?”

“We looked at a lot of demographics and information,” Jewusiak said. In doing that, they found a number of things. Among them was the discovery of a “colored” section in the church’s cemetery. “We found out that it was specifically set up that way so that African Americans could be buried there. At the time, many of the churches in our area would not allow that to happen and also would not allow marriages or baptisms [for people of color] within those congregations,” said Jewusiak.

Early church membership at Doylestown Presbyterian Church included African Americans, and documentation revealed marriages, baptisms and funerals were performed for them. The congregation also discovered that its founding pastor, the Rev. Uriah DuBois, was active in the antislavery  movement. According to genealogical records, the pastor started and taught at a school for African American adults. Historical records also revealed that one woman of African descent appears on the membership rolls as far back as 1816, when the church, about an hour north of Philadelphia, was officially chartered by the Presbytery of Philadelphia.

But there were more discoveries to be made that would strengthen their commitment and provide a vision for living out the call to dismantle structural racism. That was the discovery of Gladys Nickleby Nelson’s story. Nelson was the first African American registered nurse in the Doylestown school district and was instrumental in administering the polio vaccine locally and across the country. In 1954, Nelson opened and managed the very first clinic in the United States to inoculate children against the polio virus. Polio was the COVID-19 of the mid-20th century. “Because she was successful in setting up a clinic in the Doylestown community, she was asked to assist in establishing other clinics in the country,” said Nancy Nelson, Gladys’ daughter, who is a member of Doylestown Presbyterian Church. And she said, “Of course I was small at the time and didn’t really realize the whole thing until I heard the story a little bit later in life.”

While Gladys died in 2003, her story, along with other church documents uncovered by the Matthew 25 committee, affirmed the congregation’s commitment to raising the voices of others. “We believe that the church founders felt called to live out true discipleship by acting boldly and compassionately, serving those who are hungry, oppressed, imprisoned or poor,” Jewusiak said.

“We aspire to follow in their footsteps and honor their legacy as we mobilize Doylestown Presbyterian’s Matthew 25 initiative.”