Christmas Joy Offering – Supporting our leaders: past, present and future.
Make A Donation Click Here >
Home › Do Presbyterians believe in the devil? 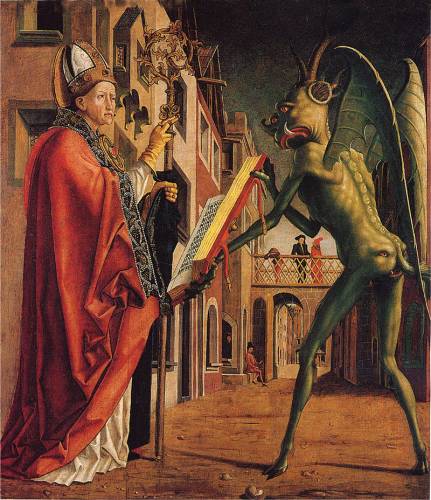 A new level, a new devil. I couldn’t believe my ears when a young mother said this during a Bible study once. I rarely heard anyone talk so openly about the opposition that comes when you walk with Christ — even though our Presbyterian confessions speak of this reality. In the Heidelberg Catechism, Question 127 asks why we pray, “Lead us not into temptation but deliver us from evil.” The answer: . . . since our mortal enemies, the devil, the world, and our own flesh cease not to assault us, do Thou therefore preserve and strengthen us by the power of Thy Holy Spirit, that we may not be overcome in this spiritual warfare . . .  .

When I told the mother I had never heard a Presbyterian talk this way, she laughed. She grew up Pentecostal. A pastor once told me before I graduated seminary that “we Presbyterians don’t talk about the devil.” We leave that to our “more evangelical” brothers and sisters, he said. I had asked him about spiritual warfare, as I had noticed in my life a new devil greeted me at each new level. After our conversation, I made a note not to preach on this topic in my future church. A few days later, though, I sat among the stacks of books in Princeton Seminary’s library, looking forward to some leisurely reading. That’s when I noticed I was sitting in front of a selection of books about spiritual warfare being real. The hairs on the back of my neck bristled.

What is it that we believe about spiritual warfare? And why is it important to talk about it? Presbyterians Today talks to the Rev. Jerry Andrews, senior pastor of First Presbyterian Church in San Diego, about this hushed topic.

PT: You’ve traveled extensively, teaching and training pastors. Is there more of an openness to spiritual warfare in countries outside the U.S.?

Andrews: The very idea of spiritual warfare troubles us, but the warfare itself greatly troubles our sisters and brothers elsewhere. A woman may ask me to pray for good health; a man for employment. No different from the requests I get back home in San Diego. But then, a parent will ask for the spell put on her child to be lifted; the evangelist, for the demons who blind — both physically and spiritually — to be driven away. I have also witnessed church leaders earnestly praying for the defeat of and protection against the wicked and witches, darkness and demons, princes and principalities. They know that discipleship comes with opposition on many levels.

PT: Can you say more about this opposition?

Andrews: Jesus invites the disciples to follow him. He sends them into villages to heal the sick and proclaim the kingdom. But there is one more thing to learn: to face the opposition he faces; to be prepared for spiritual warfare. For example, in Luke 11, Jesus drives a mute demon out of a man. While the crowds’ reactions to the miracle are reported, Jesus’ response to the responses is told at length. In reading it, we learn what Jesus teaches his disciples about opposition. The opposition is called out and openly discussed. Jesus speaks of overpowering Satan. The language, though, is not defensive. Spiritual warfare is not just “preparing for an attack”; it is offensive — more like “attack!” That’s what Jesus is doing. When we, today’s disciples, go to any neighborhood to make room for Jesus, we will find the spaces occupied by that/by those who will not want to make way for the Lord. Spiritual warfare is facing that opposition, just like Jesus. The very idea of spiritual warfare shouldn’t trouble us into not talking about it, nor engaging in it with earnest prayer as I have seen done by church leaders elsewhere. Our Reformed faith was never silent on the topic.

PT: What would John Calvin say?

Andrews: Calvin wrote about Luke 11, “We have been forewarned that an enemy relentlessly threatens us, an enemy who is the very embodiment of rash boldness, of military prowess, of crafty wiles, of untiring zeal and haste, of every conceivable weapon and of skill in the science of warfare … we should not let ourselves be overwhelmed by carelessness or faintheartedness, but on the contrary, with courage rekindled stand our ground … .