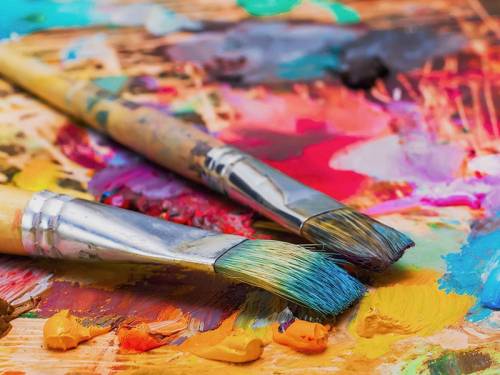 Two years ago, I collaborated with colleagues and friends to develop an experimental, art-making, spirit-stirring, imagination space called Creation Lab. We believed that the church needed spaces set aside for creativity and trying new things — a research and design space, if you will.

We knew, as creative church pastors and leaders, that we were hungry for such spaces. Deep in our bodies and spirits, we were being depleted. Our creativity needed an outlet and a place for renewal and expansion, and we believed we weren’t alone. Our idea was this: Create a working art studio space where we could collaborate and experiment at the intersections of art, spirituality and faith leadership and invite other folks to join us.

We found a space in a larger artist and musician collective building on Chicago’s Northwest Side and we built a studio. And while Creation Lab hosts open studio time and workshops on-site, we also find ourselves out and about both online and on the road, curating creative conversations, maker-spaces and spirituality studios at churches, conferences and gatherings.

There are artists, creative types, and makers and builders in all of our congregations. Many of them are hiding in the back or they’re doodling and knitting quietly in the corner of our meetings. They say things like, “I’ve been an artist/writer/builder/maker my whole life and I’ve never imagined this work as a prayerful or spiritual practice.” These folks are just waiting to collaborate with us or to be unleashed in our communities.

But most often art supplies, whether paints and brushes, or glue guns and a pile of twigs, are met with fear and trembling. At some point, many of us were told (usually somewhere in the second or third grade) that we weren’t very creative or talented and our art wasn’t “good,” so we gave it up. We stopped mixing all the colors together to see what would happen and we put down the crayons or the pencil or Play-Doh, believing it was only for children and artists.

We are a death and resurrection people. We are a start over, start again, turn around and find a new path people. We are a being formed and re-formed by God again and again people. The world (and the church) doesn’t hinge on everything being “good” all the time. In fact, there’s grace and discovery to be found in failure.

Give it a try.

Shawna Bowman, co-founder of Creation Lab, is an artist and pastor doing ministry with the creative and quirky folks at Friendship Presbyterian Church in Chicago. Bowman is also associate director of field and experiential education at McCormick Theological Seminary.