A spiritual guide for the coming year 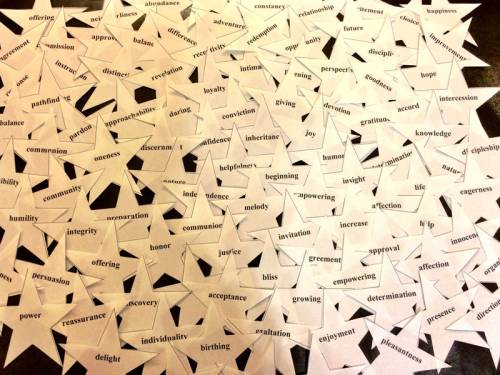 Presbyterians have found that compiling the words to write on the Epiphany stars can be just as spiritual and profound as receiving a star. Marci Auld Glass

And by the light of that same star,
Three Wise Men came from country far,
To seek for a King was their intent,
And to follow the star wherever it went …

It was the start of a new year and the faithful gathered in the sanctuary of White Plains Presbyterian Church to celebrate the ancient feast of Epiphany — a day often observed in congregations the Sunday before its official Jan. 6 date. Voices joined in singing “We Three Kings of Orient Are” — all five verses — and listened once again to the Scripture lesson of how Magi from faraway lands were led by a brilliant star in the sky to the Christ Child. As the service drew to a close, it was now the congregation’s turn to be led by a star.

This star, though, was not a celestial ball of fire burning over the town of White Plains, New York. This star was an unassuming paper cutout with an equally unassuming word written on it. With enough for each church member, the stars were placed on a table with the words facing down. It was only when a person selected a star and flipped it over, they would see what would become their guiding word for the year. That was when the fun began, said the Rev. Lynn Dunn, minister of Christian education and spiritual formation at White Plains Presbyterian, who admits to having a passion for doing creative things in worship — “anything that might bring a new and deeper understanding to old practices.” 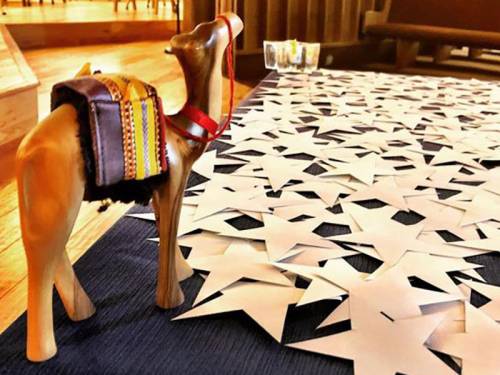 The Rev. Marci Auld Glass has been promoting the practice of Epiphany star words in recent years on her blog. Here, last year’s stars, with their words face down, wait for people to select them. Marci Auld Glass

“Some people were intrigued with their word. Some traded their stars for a better word. There was even one woman who had a negative reaction to the word on her star, but she kept it anyway,” said Dunn. And then there was the star someone had relinquished a few days later. Its word, “triumph,” was slipped under the door of Dunn’s church office. It was a gesture that moved Dunn as she had had a trying year.

The practice of handing out Epiphany star words has been a familiar one in other denominations for years, but it has only recently been growing in popularity in Presbyterian churches. The Rev. Marci Auld Glass is pastor at Calvary Presbyterian Church in San Francisco. She is also a blogger who has done a lot in promoting the practice of star words within Presbyterian circles. The rise in star words’ popularity also coincides with a renewed interest in the feast day itself among Presbyterians. When once the Magi made a December appearance in church nativity pageants, they now process into the sanctuary in January. Congregations are also holding Día de Los Reyes or Three Kings Day celebrations complete with a king cake, in which is hidden a plastic baby Jesus.

Dunn introduced the practice of Epiphany star words to the White Plains congregation two years ago. Initially, the stars were met with a sense of wonderment and a bit of confusion. “I heard a lot ‘What is this all about?’ ” said Dunn.

Once it was explained how the stars were a spiritual practice, providing a word to focus on or pray over that might help one listen more intently to the Spirit’s whisper to them, folks became more interested. Dunn still remembers how her 2019 word, “poetry,” led her to be less didactic in her preaching and more poetic.

When 2020 rolled around, Dunn heard words from the congregants that made her creative soul joyful: “Can we do this again?” She began putting a list of words together, which in itself was an “interesting” process — an unexpected spiritual moment for Dunn. “What words did the congregation need to hear?” she wondered. “What words would address the church’s context or what was happening in the world?” Dunn then turned to the Bible for words that evoked spiritual growth and grappling. “ ‘Wrestle,’ as in Jacob wrestling with the angel, was a good word,” she said. Dunn also invited the congregation to submit words.

No one, though, could ever expect just how prophetic the 2020 Epiphany star words would be, especially for their pastor.

“‘Show’? Really?” Dunn asked herself. She didn’t remember putting that into the star word mix. Yet here it was in her hand. It was hers now. “‘What a dumb word,’ I thought,” said Dunn. But she didn’t do a star swap as some people were inclined to do when they weren’t “feeling” their word. Glass strongly advises not swapping stars. “I tell people to trust the word they choose. The words that have spoken to me the most have been the ones I wanted to throw back,” she said.

Dunn kept her star, grudgingly taping it to the glass frame in her office that held her seminary degree. “I might not have liked it, but I kept the word front and center,” she said.

At the time, Dunn was gearing up for 2020 to be a year of theological study, a time to immerse with books, books and more books. But before she could even turn a page, a new chapter was about to be written in her life, in the life of her congregation and in the lives of millions worldwide.

The COVID-19 virus was in the United States. By March, churches could no longer safely meet in person and had to quickly adapt to digital ministry. Dunn found herself setting up a studio in her home to continue Christian education classes for the children of White Plains Presbyterian. Trained in Godly Play, an educational approach that tells the Scripture story through play pieces, Dunn began streaming her lessons for all to watch.

In the frenzy to shift from in-person worship to online services, on top of the anxiety added to a pastor in terms of how to connect with families, children and teens when meeting face-to-face was not an option, Dunn didn’t have time to think about the star she held in her hand a few months back. Epiphany seemed like a lifetime ago, she said. It wasn’t until October that her star word became clear to her.

Dunn had just returned to her church office after being gone many months. She sat at her desk and recognized that she had been feeling down. “At that time, it had been six months of doing online ministry. Was this the future? Was this the new norm?” She looked up and there was her Epiphany star taped to the glass frame staring back at her: “show.” The word she disliked so much shone brightly with meaning. “That’s exactly what I had been doing in 2020. I was called to ‘show’ the Bible stories, to create videos, inviting people to experience Godly Play. I found myself reading books to children online,” said Dunn.

Dunn wasn’t alone in having a powerful spiritual awakening. The Rev. Shannon A. White, pastor of Wilton Presbyterian Church, was equally moved by the way the Spirit was speaking to her in 2020. White, who began offering Epiphany star words in her congregation three years ago, had chosen two words: “justice” and “delight.” They were taped to her refrigerator, giving her time to pause and reflect on them daily. As 2020 continued to be plagued by a pandemic, White kept wondering what the word “delight” was all about.

“COVID-19 doesn’t bring up an image of delight,” she said. It was then that she decided to dig deeper and begin trusting the word. As the months went by, she began to realize that while living in a “horrendous” year, there were unexpected delights to give thanks for. White had just recently remarried and with her college-age daughter back home due to no in-person learning, it was an opportunity for her daughter and new husband to bond. “That never would have happened had there not been a pandemic,” said White, who also discovered other delights in the crisis, simple ones such as spending more time in nature.

As for her other star word, “justice,” that is a word that has been poking at her — still. White is a pastor in a white Connecticut neighborhood. While the church she serves has had a history of “stepping out of tradition” and not being insular, there is still a lot of racial justice work to be done. Her star word “justice” has led to a question in which she keeps searching for an answer. “What does justice mean in a white upper-middle-class town?” said White.

The Rev. Adriene Thorne, senior pastor of First Presbyterian Church in Brooklyn, New York, was not familiar with the practice of star words until meeting the Rev. Dr. April Stace. Stace, an ordained minister in the American Baptist Church and author of “White Knuckle Love,” recently came to First Presbyterian as its minister of formation and education. One of the first things she did was suggest Epiphany star words. In January 2019, with more than 200 stars in baskets, the children of the church moved up and down the aisles handing them out.

“It was a deeply moving experience,” said Thorne, recalling how people reacted and interacted with the words as the stars became conversation starters. Thorne remembers how in the first year she would see stars left behind in the pews and those in the congregation who knew whom the star belonged to would pick it up and hand it to them.

“You would hear in the church sentences like, ‘You left ‘forgiveness’ on the pew; here you go,’” laughed Thorne.

“We would be talking, and the person would say, ‘I guess I shouldn’t be surprised because my word for the year was … ,’” said Thorne.

For the pastor herself, her star words these past two years have been thought-provoking. In 2019, Thorne’s word that found her was “fun.” (Thorne tells everyone that the star words aren’t magical, but mystical. “Approach this practice with the belief that the word has found you,” she said.) The busy minister and mother didn’t think much about the word until her then-9-year-old daughter wrote “be” in front of “fun.”

“Be fun” not only meant more mother-daughter time, but it also led Thorne to recommit to the passions that had fallen by the wayside, as often happens in parish ministry. Once a professional dancer who had performed with the Dance Theatre of Harlem and was once a Radio City Rockette, Thorne felt the Spirit nudging her to return to her art. The following year’s star word would also be an eye-opener: “recreation,” or as Thorne’s eyes saw it — “re-creation.”

“Isn’t that what we had to do in 2020?” asked Thorne. “We had to reimagine life together and not just in the church. We were called to start putting back together broken pieces in new ways that are both beautiful and sustainable,” she said. “‘Recreate’ was a perfect word to receive.”

What will this year’s words hold for Presbyterians? Whatever the words may be, one thing is sure: When opened to the Spirit, an unassuming paper star with an equally unassuming word on it can guide one just as powerfully as that celestial ball of fire shining in the sky did for the Magi so many years ago.

And to follow the star (word) wherever it went …

Epiphany Star words in a time of pandemic

The year 2021 begins with COVID-19 safety protocols still in place. Here are some thoughts for sharing Epiphany star words safely with others both online and in person.