The three kings are coming 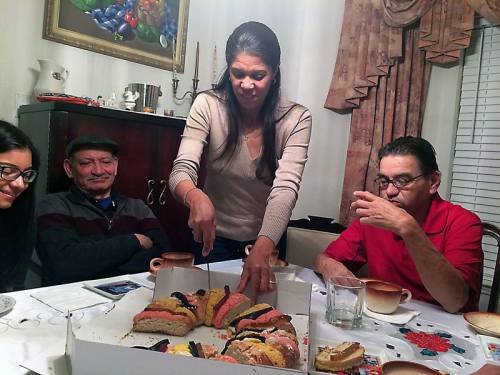 While Three Kings Day celebrations can be held in church fellowship halls, many of the gatherings take place in the homes of friends and family. The star dessert at these gatherings is the rosca de reyes or Three Kings cake, where a plastic figurine of a baby, representing baby Jesus, is hidden inside. Courtesy of Ruth Roman-Meza

Did you ever put out cookies and milk for Santa on Christmas Eve? How about oats for the reindeer? Growing up in Cuba, I learned about these traditions from books and movies. My Christmas celebration, though, did not include any visitors from the North Pole.

Instead, on Jan. 6, I anxiously awaited the visit by the three kings on Día de los Reyes, “Three Kings Day.” Since these kings came from the East, bearing gifts and traveling in a camel caravan, my holiday preparations included gathering fresh grass for the camels, along with water and, on occasion, cigars for the Magi!

Children in Spain and Latin America have been observing Three Kings Day for centuries.

“My parents always encouraged the celebration, and even bought special, colorful baskets that my brother and I stuffed with grass,” said the Rev. Danilie Hilerio Villanueva of Rincón Presbyterian Church in Rincón, Puerto Rico. “Even if the children of the family received only a small gift and candy from the Magi, it was a joy to anticipate the surprise and to share a family meal without the rush that often accompanies the December festivities.”

Hilerio Villanueva also has fond memories of her childhood at Primera Iglesia Presbiteriana (First Presbyterian Church) in Aguadilla, Puerto Rico, where los Reyes Magos — the Magi — always made an appearance.

“The church had no gift exchange in December. Rather, children received gifts on Epiphany Sunday,” she said. “It’s a wonderful thing that even now, despite Christmas being so commercialized and the growing North American influence on the island, Santa Claus has not displaced los Reyes Magos.”

Three Kings Day is rooted in the biblical story of the visitation of the Magi, where the Gospel of Matthew tells of wise men from the East following a star that signified the birth of a king. With them were gifts of gold, frankincense and myrrh to present to this king. 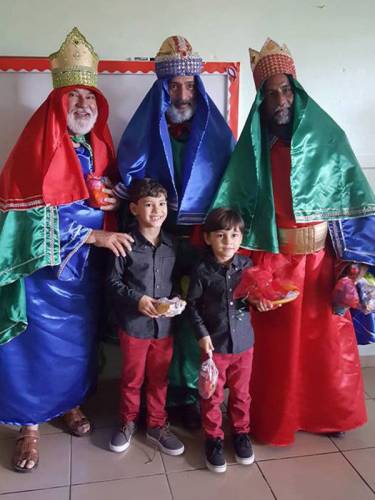 Matthew’s text doesn’t give names for these wise men, nor the number of them. However, given the biblical reference to the three gifts of gold, frankincense and myrrh, legends often speak of three kings, so three people dressed in makeshift robes and cardboard crowns make their appearance in churches not only on the island of Puerto Rico, but on the mainland as well.

“In my congregation, three different men are selected each year to represent los Tres Santos Reyes [the Three Holy Kings],” said Florence Vargas, a ruling elder and women’s leader at the Presbyterian Church in San Sebastián, Puerto Rico. “They take part in worship, dramatizing the biblical story dressed in colorful gowns and capes, and greeting people by name. Some even grow their own beard for months to play the part.”

No matter the number of Magi, they all come bearing gifts. This has led to churches developing a gift-giving tradition in connection with the January feast day.

“We gather in homes on the first Friday in January, and each family brings a dish representative of their country of origin, along with simple gifts to share,” said the Rev. Jeniffer Rodríguez of First Presbyterian Church in Ossining, New York. “We sing carols and share drinks, such as hot chocolate, wine or coquito [a coconut-based alcoholic beverage similar to eggnog that originated in Puerto Rico]. We are a multicultural congregation that cherishes its traditions from around the world.”

Although gift exchanges are popular on Three Kings Day, some congregations use the opportunity to emphasize mission.

“My first Día de los Reyes as a pastor was right after Hurricane Maria struck Puerto Rico, so we decided to serve meals to the community surrounding the church in Rincón,” said Hilerio Villanueva. “We turned the feast into a thanksgiving celebration and showered the boys and girls from the community with gifts brought by the three kings.”

Reaching out to neighbors indeed captures the spirit of the day. After all, the Magi were, according to the Christian tradition, pilgrims “from the East” or “from the Orient” — as underscored by carols and hymns — whose devotion brought them to Bethlehem.

Based on the Matthew narrative, Christian tradition has always stressed that Gentiles as well as Jews came to worship Jesus. Many non-Latin Presbyterians, while perhaps not celebrating Three Kings Day, are familiar with Epiphany, which is from the Greek word epiphaneia, meaning “manifestation,” and observe the first revelation of Jesus Christ to the Gentiles, represented by the Magi.

In Santa Fe, New Mexico, the congregation of Westminster Presbyterian Church might not have an elaborate Three Kings feast, says the Rev. Antonio (Tony) Aja, but “as good Presbyterians, we celebrate Epiphany Sunday.”

“And we honor our cultural heritage by singing hymns in Spanish as part of the liturgy,” said Aja. “For a congregation that is primarily English-speaking, this is a small but powerful way of saying that the stranger is welcomed here.”

Over the years, there has been a growing interest in the Latin celebration of Three Kings Day in the United States, with major retailers tailoring marketing and merchandising for this day. Even bakeries around the country have seen an increase in interest for the ubiquitous Three Kings Day sweet treat known as rosca de reyes (translated as “ring of the kings”) and often called Three Kings cake or bread.

The rosca, though, isn’t your ordinary holiday delicacy. The pastry is ring-shaped to resemble a crown and decorated with colored sugar and candied fruit to resemble jewels.

Inside is one or more small, plastic figurines of a baby, which represents the baby Jesus.

People take turns cutting their own piece of the rosca. The person who gets a figurine is supposed to organize and be the host of a celebration for Candlemas, which commemorates the presentation of Jesus at the Temple on Feb. 2.

“At my house, before we eat the rosca, children are reminded to be careful and look for the baby inside the bread,” said Ruth Roman-Meza, an elder at Emmanuel Presbyterian Church in Dallas. “The baby is hiding in a safe place from Herod, who, according to the Gospel narrative, wanted to hurt the children.”

Three Kings Day celebrations, says Roman-Meza, are not only festive, extending the holiday season, but can enhance intergenerational ministries as well.

“The celebration offers an opportunity to share the biblical story with the youngest members of the family,” Roman-Meza said.

Serve up a rosca de reyes 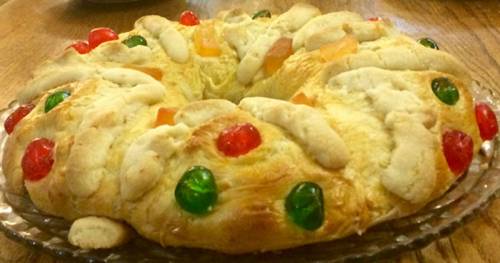 On Epiphany Sunday, make a rosca de reyes cake for coffee hour. You can either bake your own using online recipes or buy one at a local Latino bakery.

If you don’t have access to a Latino bakery or have no time to bake, try using a doughnut-shaped coffee cake and inserting your own plastic baby figurines, purchased from a party store, from the bottom of the cake.