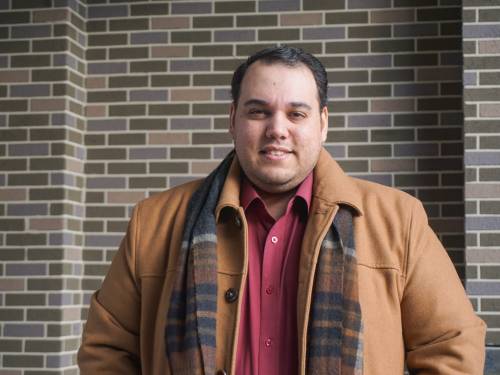 LOUISVILLE – Like many seekers before him, the Rev. Amir Tawadrous came to American shores on a journey of discovery.

Born and raised in Upper Egypt, Tawadrous had also lived with his family in France for two years before returning to Egypt to finish his Bachelor’s degree and later his Master of Divinity degree.

“I came to the U.S. in 2011 as a global scholar to McCormick Theological Seminary,” says Tawadrous. “When I finished my Master of Theological Studies there in 2014, I received another scholarship from Union Theological Seminary in New York City to do a Master of Sacred Theology. That was when I decided that I wanted to take time to know America, also to get deeply involved with the challenges of the churches.”

And so he stayed.

In between earning his two advanced degrees, Tawadrous served as a volunteer technician for the 221st General Assembly (2014) of the PC(USA), which proved a turning point in his life.

“The decisions that were made at the 2014 General Assembly were very important because they made me decide that I wanted to continue as a PC(USA) minister,” he says, citing particularly two of the assembly’s actions to divest from three U.S. companies doing business in Israel-Palestine and to allow for PC(USA) teaching elders to perform same-gender marriages.

“That was very meaningful to me,” he says, “how the church is going forward.”

After being ordained as a teaching elder in 2015 by the Evangelical Presbyterian Church of Egypt, Synod of the Nile—a PC(USA) World Mission partner—Tawadrous went through the Church Leadership Connection, the PC(USA)’s internet-based matching and referral system, to apply to several churches in the U.S. He was soon offered two calls, one as an associate pastor at a large congregation in New York, and one at a two-point, yoked parish in Kansas City, Kansas, in conjunction with the Presbyterian Mission Agency’s Small Church Residency Program.

“I selected Kansas because I came here to the States by myself,” he says. “I have no family—I’m single—so I wanted to be with some people that I know that would be also a source of support to me. I actually already knew one Egyptian family in Kansas City, who are now in my church.”

The Small Church Residency Program (SCRP)—originally called ‘For Such a Time as This’—has served to pair small, underserved congregations in rural, small town and urban settings with recent seminary graduates for a two-year pastoral-residency relationship, during which they are supported and guided by a cluster of pastor-mentors.

Although the program, which started in 2009, will come to a close in December 2017, the office of Theology and Worship is continuing to provide guidance and oversight to the pastoral residents commissioned in 2016 as well as the other pastors in the program, like Tawadrous, who are at the mid-point of their respective residencies. Since September 2015, he has been serving two yoked congregations, Southridge Presbyterian Church in Roeland Park, Kansas, and Argentine United Presbyterian Church in Kansas City.

“I chose the Small Church Residency Program because it was important to me that the call is designated for two years, which allows me to grow spiritually, and I knew that Heartland Presbytery would appoint a mentor for me,” says Tawadrous, who was in Louisville Feb. 6–9 for the SCRP’s final cohort gathering.

“I was also worried because all of my ministry before this was basically in Arabic countries,” he continues. “Coming to the States, I was worried how people would look at me. I didn’t want to take the risk of accepting a call where I would be fully responsible for things without having some kind of help.”

Tawadrous adds that he also happens to like small churches.

“I feel in the smaller churches it’s more about family, about connection,” he says. “It’s about living together and how it is important for us as Presbyterians to always remind ourselves that smaller churches live in God’s covenant with the area—with the neighborhood—that they live in. Their ministry doesn’t depend on how big they are in numbers, but how effective God’s mission is in their heart and in their neighborhood. They may do little things but the little things are very meaningful.”

One of the “little things” Tawadrous says the congregation does is open the church to the homeless people in the neighborhood so that they can take a shower in the morning. “That is a simple thing that probably we do,” he said. “Every time these people get out of the shower, I feel it’s a new baptism in their life.”

Another “simple thing” that Tawadrous regularly does is listen.

Most recently, he has been listening and serving as a non-anxious presence for three immigrant families—Syrian, Sudanese, and Egyptian—who are members of the Southridge Church. While the families have different backgrounds, Tawadrous says that their shared language of Arabic gives them a similar understanding and worldview on a number of issues.

“What united us together even more than our language and their backgrounds was for them to see an Egyptian minister who speaks their own mother language and who, at the same time, is a minister of an American church of Anglo people,” he says. “It’s now a part of our identity that we are here in the States. Our history is not only limited to the countries that we have been living in. We have to be able to go forward in our life.”

Tawadrous describes the “huge feeling of fear” being experienced in particular by the Sudanese and Syrian families, since both of those countries are included in the president’s executive order on immigration.

Speaking about an ongoing crisis in the life of the Syrian family related to the husband’s inability to leave and reenter the U.S. freely, Tawadrous says, “He came to my office and we were sitting talking, and I was listening to him. It was a time for him to cry. He was really crying like a child.”

“There is a time for us as ministers when we ask ourselves, ‘How can I help,’ when there is nothing practical at hand that I can offer,” he continues. “At that moment…there is something that is deep in us that keeps us alive, and we experience that in our spirituality, and how God leads us. I do believe theology is the language of transcendence. Theology is the language that says that we are not limited by what is going on. That was very helpful to me in supporting these families and in supporting myself, too, in terms of how I can be of help to these people.”

The Egyptian family had told Tawadrous that their child who attends public school in Kansas City was being bullied by his classmates, who told him that the new president would “kick him and his family out.”

“That was really painful,” says Tawadrous, “but I see my congregation as a source of healing.”

“Perhaps especially in anxious times the church needs pastors like Amir, who offer the best in both pastoral and prophetic ministry,” observes the Rev. Marvin Ellison, director of Alumni/ae Relations at Union Theological Seminary in New York. “Union has a strong national and international reputation for preparing faith leaders who make a difference, from the early ANC freedom leaders in South Africa to today’s Christian clergy who must be prepared to work inter-religiously as well as ecumenically, and to reach out to the alienated as well as the affiliated. As a recent seminary graduate, Amir appreciates how​ ministry requires enlarging the circle of community and being prepared for anything and everything.”

In the congregations Tawadrous serves, the services are held in English. Recently, however, he has started the practice of occasionally reading scripture in Arabic and English, “not because these families don’t know English, but because it helps the Anglo people in the church to realize that God is not limited by a language.”

The Rev. Cynthia Cushman, coordinator of the Small Church Residency Program, says that one of the joys of the program is having all of the new pastors come together from different places and share with one another their joys and struggles in ministry.

“Amir’s story of his congregation welcoming these refugee families was very much one of joy and struggle—joy that these families found a welcoming community in that church, and a struggle as the church tries to be in solidarity with them in our current political climate,” Cushman says. “We all learn from each other’s stories, and Amir sharing his unique story with the group opens all of us up to new possibilities in ministry that we may not have thought of before.”

After listening to the stories of his SCRP colleagues, Tawadrous is equally ready to embrace new possibilities in ministry.

“The Small Church Residency Program was a step that I wanted to take in my life that would introduce me more to the culture here—introduce me more to a new beginning,” he says. “I was also hoping that what the scripture says, ‘no slave, no free, no Greek, no Jew,’ would be true in my ministry, bringing these people together from the Middle East with all their diversity. I believe that this is one of the main sources of hope for the people here and for the future of our church as well.”