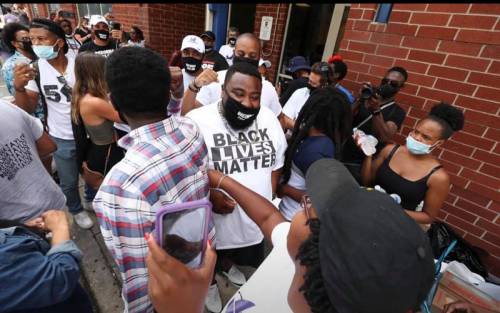 Adrian Baker (center) after felony charges were dismissed against him and 86 others for protesting at the home of Kentucky Attorney General Daniel Cameron. (Contributed photo)

LOUISVILLE — Having declared a state of emergency this week as Louisville, Kentucky prepares for a decision on indicting police in the Breonna Taylor case, Adrian Baker, the student body president at Louisville Presbyterian Theological Seminary, describes the situation as “a powder keg.”

“I’m distracted and anxious to say the least,” he said. “Whether the cops are arrested or exonerated, we’re hoping for the best, but anticipating the worst. By the grace of God, nobody gets hurt.”

Taylor, a 26-year-old Black woman, was fatally shot by police March 13 during a raid at her apartment.

Baker works with Until Freedom, a social justice organization working to address systemic and racial injustice. While Until Freedom is based in the nonviolent principles espoused by the Rev. Dr. Martin Luther King, Jr., Baker said they understand tempers will rise and that some will not be calmed or corralled.

“We are not peaceful prophets, but we are prophets for peace,” he said, “which is why I operate in non-violent way — because I don’t trust the temperament of local police, any rogue organization or white supremacist. “

On July 14, Baker was one of 87 people arrested during a Breonna Taylor protest at the home of Kentucky Attorney General Daniel Cameron. Protesters demanded that the officers involved in the shooting be charged.

Those arrested in the protest were charged with felonies for intimidating a participant in a legal process.  Baker said what was perceived as threatening was their chant, “We want justice, we want in now, if we don’t get it, shut it down.”

In jail, Baker and the others were chained together like a chain gang, with six on each chain.

“They were putting us in our place, so to speak,” Baker said.  “It definitely brought back memories of Black and brown brothers and sisters connected together — with the risk of COVID-19.”

Baker was prepared to be arrested, but not expecting to be arrested or charged with a felony for what he did on that day. He said in a video of the event, he was the one picking up papers that were falling to the ground around Cameron’s garden.

Baker, a team leader with an insurance company, has been in the insurance business for nearly 20 years. His insurance license was up for its two-year renewal on August 31. Because of the felony charge, he had to talk with insurance boards in Kentucky and Georgia. When the felony charge was dismissed with prejudice, Kentucky renewed his license, while Georgia still hasn’t.

Baker moved to Louisville from Atlanta in 2019 to attend LPTS and pursue a Master of Divinity degree.  A Baptist, Baker said that God called him to preach while he was at Georgia State University pursuing a Master of Public Administration degree. He plans to finish his final semester for that degree online.

While LPTS’s tuition-free courses were a major incentive for Baker, once he arrived at the seminary, he realized there was no other place he’d rather be. 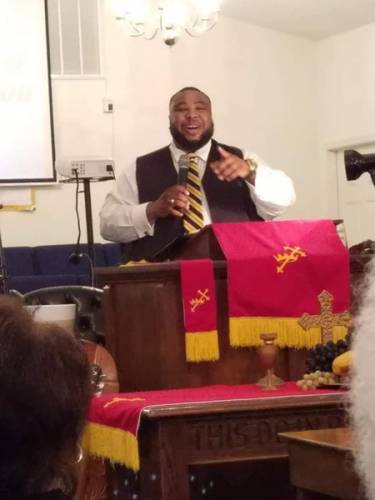 “I found a community bent toward inclusiveness and justice for all my brothers and sisters and siblings,” he said. “This is a place that reflects my theology.”

Baker, who recently preached during an Until Freedom online gathering, said he’s grateful for faith leaders involved in the movement who are willing to address systemic and racial injustice. He also expressed gratitude for the Black church and its leaders who are offering their wisdom, resources and bodies.

“We might not look like we did back in the day,” he said. “Some of that is because media attention hasn’t been able to identify one person, like they did with Dr. Martin Luther King, Jr.”

“Whether the cops are arrested or exonerated,” he said, “we’re trying our best to counteract anything that becomes violent.”