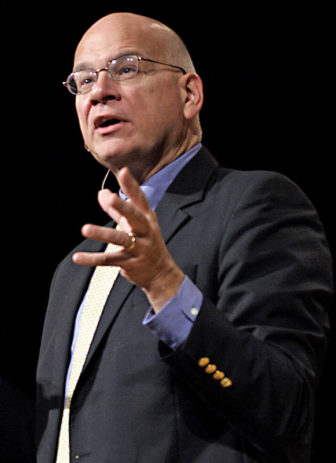 LOUISVILLE – The Rev. Craig Barnes, president of Princeton Theological Seminary, issued a statement earlier today reflecting on the events of the 2017 Kuyper Lecture at the school. The lecture, and the award of its namesake, has been in the news over the past several weeks.

The Rev. Timothy Keller, founding pastor of Redeemer Presbyterian Church (PCA) in Manhattan, had initially been awarded the annual Kuyper Prize for Excellence in Reformed Theology and Public Witness by the seminary. But the award was withdrawn after critics protested Keller’s affiliation with the Presbyterian Church in America, which does not permit women or LGBTQ persons to be ordained.

On March 22 Barnes announced the seminary would not award the Kuyper Prize this year. Although the award was rescinded, Barnes noted Keller had agreed to deliver the Kuyper Lecture on April 6 as planned, speaking on British missiologist Lesslie Newbigin and his teachings on the church’s mission.

“We are a community that does not silence voices in the church,” Barnes wrote. “In this spirit we are a school that can welcome a church leader to address one of its centers about his subject, even if we strongly disagree with his theology on ordination to ministry. Reverend Keller will be lecturing on Lesslie Newbigin and the mission of the church—not on ordination.”

Barnes’ complete statement is below:

Last week over 600 people heard the Rev. Dr. Timothy Keller deliver the Kuyper Lecture on our campus. The audience included a large and broad spectrum of the Princeton Seminary community. Before the lecture, a group of students held a “preach in” in Miller Chapel, featuring the voices of women and LGBTQ+ individuals. After the lecture, there was a reception to engage in conversation with Dr. Keller and with one another. Across our campus, it was an evening of vibrant theological discussion.

During the last few weeks, I have spent much time reflecting on community and Christian faith. The decision not to award the Kuyper Prize this year has been controversial. The challenge that we faced was balancing our firm commitment to being a school that welcomes a diversity of theological perspectives with our ability to maintain “the unity of the Spirit in the bond of peace.” We all want our seminary to be a place that encourages healthy Christian debates, but we also have to guard against hurting our community in the process.

The conversations I had with students, faculty, and alumni made it clear to me that the prize itself had become symbolic of a painful fracture in the Reformed family surrounding ordination standards. As a school of the Presbyterian Church (USA), Princeton Seminary affirms its polity, which requires the ordination of women and permits the ordination of LGBTQ+ persons. We have had many other speakers on campus who represent denominations and religions that do not ordain women or LBGTQ+ persons and we certainly will again, but granting an award for excellence in Reformed theology took on a greater significance, revealing a deep wound among the divided Reformed communions.

While we are clear about the Seminary’s commitments, those who hold different theological perspectives also belong in this learning community. Our belonging is rooted not in polity or assent to a particular view or even in agreement with every Seminary decision, but in Jesus Christ alone. Princeton Seminary is a diverse community that is united by Jesus Christ, which is a great gift that constantly gives us opportunity to practice living with “all humility and gentleness, with patience, bearing with one another in love” (Ephesians 4:2).

This event prompted a robust debate within our community and beyond the campus about academic freedom and the values of our community. It is an important conversation for us to have.

One of the goals of higher education is to foster the kind of intellectual inquiry that can engage a wide range of viewpoints, including those that diverge from our own deeply held convictions and commitments. In fact, this is the crucible in which our theology is formed. It is not the Seminary’s goal to prevent our students from having to encounter serious questions to what they hold dear. Princeton Seminary is a graduate school of the church that demands rigorous engagement with ideas that challenge one’s theology.

Many schools of higher education face questions about free intellectual inquiry, but what makes the conversation different in our community is our common calling as Christian people. The grace and love of Jesus Christ is the foundation of our community, and it means that all of us belong. Even and especially when we have disagreements, we trust in Jesus Christ as our center, confident that the center will hold us fast.

We live in a society that is increasingly polarized. It is easy to focus on establishing boundaries of “us” versus “them.” Fear and suspicion drive neighbors apart. The church has a powerful witness in such a time as this, for the Gospel calls us to a different way of life together. As Christians we are called to engage one another respectfully, generously and, even when we disagree, to see the face of Christ in one another.

Last week as I was participating in worship in Miller Chapel, I looked at the Seminary choir as we sang Amazing Grace. There I saw students who were evangelical and progressive, liberal and conservative, Presbyterian and Baptist and Lutheran and Pentecostal. They represented different races, nations, and sexual orientations. Together they were leading us as we gave praise to the amazing grace of God that centers our covenantal community. This has long been who we are as a seminary: a diverse group of Christians who gather to study and to praise our Creator, and we remain committed to living out this vision of the kingdom of God on our campus.