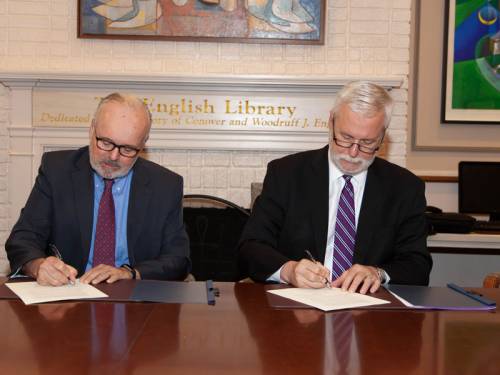 NEW HAVEN, Conn. — President M. Craig Barnes of Princeton Theological Seminary and Executive Director Thomas J. Hastings of the Overseas Ministries Study Center (OMSC), a renowned research institute for world Christianity and a gathering place for global Christian leaders, signed a Memorandum of Understanding (MOU) Wednesday in New Haven, Connecticut. The MOU provides for OMSC to relocate its operations and programs to the Seminary beginning in summer 2020.  After a two-year transitional period, OMSC will become an official program of Princeton Seminary.

“Princeton Seminary is deeply grateful to welcome the Overseas Ministries Study Center to our campus community,” Barnes said in a Princeton Seminary news release. “OMSC has an outstanding reputation for serving scholars and church leaders from around the world through its exceptional programs. The center’s residents and programs will enrich our community and deepen our students’ understanding of world Christianity.”

Under the agreement, OMSC will continue to run its signature four-fold ministry, including its residential community of global leaders, research scholars, and artists; International Bulletin of Mission Research; study program; and Artist in Residence Program. Also, OMSC’s Asian Christian art collection will be displayed on campus.

The new alliance between the organizations will provide opportunities for OMSC scholars as well, including the ability to audit select classes; access campus resources like the more than one million books and microforms that are housed at the Seminary’s library; and fully engage in campus life, including participating in daily worship services, attending lectures, accessing student services and partaking in the many community events.

“With its passion for shaping Christian leaders for ministry around the world and vision for covenant community, we cannot imagine a more appropriate new home for OMSC than Princeton Theological Seminary,” says Hastings. “As OMSC prepares to celebrate our centenary in 2022, we are confident that we will continue to thrive at Princeton Seminary as a unique ecumenical center for sustained two-way traffic and koinonia among global church leaders, cross-cultural missionaries, research scholars and artists.”

About Princeton Theological Seminary
Princeton Theological Seminary, founded in 1812, is the first seminary established by the General Assembly of the Presbyterian Church. Its mission is to educate leaders for the church of Jesus Christ worldwide. Its students and more than 11,000 graduates from all 50 states and many nations around the world serve Christ in churches, schools and universities, healthcare institutions, nonprofit agencies, initiatives for social justice, mission agencies, and the emerging ministries of the church in the 21st century.

OMSC was founded in 1922 as the Houses of Fellowship in Ventnor-by-the-Sea, New Jersey, as a place for North American Protestant missionaries on furlough to recover their health, and to have their spirits lifted through fellowship before returning to their mission fields abroad. Recognizing the need for serious academic research on mission and on the dramatically changing face of world Christianity, the predecessor of the International Bulletin of Mission Research, called the Occasional Bulletin from Missionary Research Library, was begun in 1950. In 1967, the name was changed to Overseas Ministries Study Center, and a study program was inaugurated with seminars focusing on issues related to the many ways the world’s churches participate in God’s mission. Beginning in the 1970s, OMSC hosted annual gatherings of mission leaders from historic Protestant denominations, Roman Catholic orders, and evangelical agencies. OMSC moved to New Haven in 1987, where its reputation as a unique ecumenical hub for global missional engagement and research has continued to grow. In recent years, OMSC’s program residents have come almost exclusively from the majority world’s churches in Africa, Asia, and Latin America.