Churches and residents take ‘wait and see’ approach for now 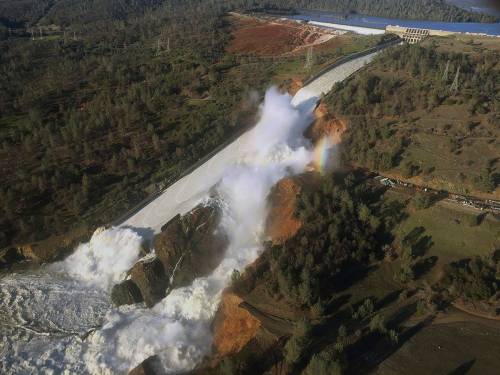 LOUISVILLE – A week’s worth of heavy rains has northern California residents on edge. Forecasters warn as much as 10 inches of rain could be recorded by the end of the day this Wednesday as flood warnings remain in effect.

The National Weather Service warns that the threat of flooding and mudslides could make travel dangerous and residents have been advised to prepare for possible evacuations.

Officials continue to monitor the situation at the Oroville Dam within the Presbytery of Sacramento. Last week the heavy rains raised concern of a possible breach and potential flooding of communities below the dam.

“Fortunately, we haven’t had to deal with flooding like we were afraid we would,” said the Rev. Robert Watkins, interim presbyter for the presbytery. “I was in Oroville a week ago Sunday on a pastoral call. We were there that morning and afternoon and didn’t realize anything was going on. It was after I left that the evacuation order came through.”

Once the evacuation order came down for communities such as Yuba City and Marysville, Watkins says churches mobilized to help those in need.

“In the town of Chico, Bidwell Presbyterian Church, which is the largest church in the presbytery, became a collection and resource center for evacuees because the county fairgrounds are in Chico,” said Watkins. “The church became the supply center and main source of information as the entire situation unfolded.”

Watkins says churches and members opened up their homes and facilities for anyone needing shelter during those first 36 to 48 hours. The rest of the time, he adds, people had to simply wait and see.

“There was a lot of concern at Oroville when it appeared the dam had developed a hole,” he said. “But the excess water flowed over the spillway and within 24 hours, the water level of the lake had lowered enough to reduce the threat.”

During the time, Watkins says everyone handled the potential threat as best they could.

“The drive between Marysville and Sacramento usually takes 45 minutes but with the rains and potential flooding, it took about seven to eight hours to drive that distance,” he said. “But despite the inconvenience, people gave what they needed in terms of material or financial resources as well as opening their homes. It was a grassroots effort that just bubbled up and people were more than willing to help each other.”

Watkins says this was the first time since the dam was built in 1968 that the emergency spillway was used.

“We have remained in contact with the Presbytery of Sacramento and are prepared to provide support if needed. We continue to pray for the residents as they anxiously await the final outcome of these series of storms,” said Jim Kirk, national disaster associate for Presbyterian Disaster Assistance. “Several PDA National Response Team members live within Sacramento Presbytery and are engaged with the Northern California VOAD (Voluntary Organizations Active in Disaster.) Through participating in the VOAD conference calls, they are able to gather situational awareness of the potential threat and the response of the many governmental, non-governmental and faith-based organizations.”

Watkins says that the best thing they can do now is keep the communication lines open with residents in the area and provide assistance when needed.

Presbyterian Disaster Assistance is able to quickly respond to emergencies thanks to gifts to the One Great Hour of Sharing.