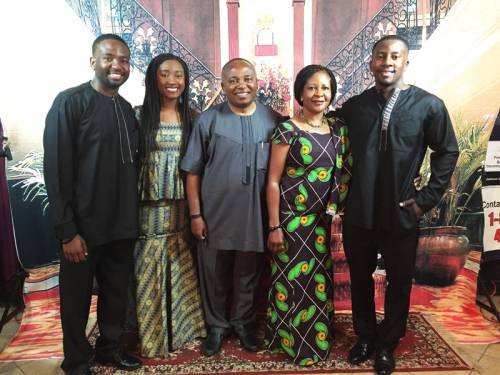 The Rev. Princeton Abaraoha, center, was once a child soldier in Nigeria. Gifts to the Peace & Global Witness Offering support efforts to end this practice. Courtesy of the Abaraoha family

LOUISVILLE – Princeton Abaraoha was a carefree 13-year-old boy when he was snatched by soldiers and taken to a military training camp. Two weeks later, he was carrying a gun as a soldier in Nigeria’s civil war.

“I was going to fetch water for my mom when they grabbed me, and I didn’t see my family again for two and a half years,” he said. The secessionist state of Biafra had conscripted him for service in its unsuccessful war to gain independence from Nigeria during the 1960s.

As the war in Nigeria progressed, Abaraoha was trained as a munitions and explosive device specialist. One hot sunny afternoon, his unit came under heavy fire and an unexploded rocket that landed nearby. While Abaraoha attempted to diffuse it, the rocket denotated, and he sustained multiple wounds.

He endured six surgeries without anesthesia over the next year and a half. He came home at age 17 and started high school, but his wartime experience left him angry and rebellious. Abaraoha drank heavily, and he says that many considered him a “terror to society.”

His life changed, however, after professing his Christian faith for the first time at the Anglican high school he attended. “My mom said God changed a heart of stone into a heart of flesh,” Abaraoha said.

Eventually, Abaraoha came to the U.S. to attend college and sensed a call to ministry. Today he is pastor of First Presbyterian Church in Midlothian, Texas, and serves the national church as field staff for the Presbyterian Mission Agency’s Intercultural Ministries.

While Abaraoha’s story has a happy ending, there are many children whose lives will not. Unfortunately, the use of child soldiers continues today. UNICEF estimates that tens of thousands of children worldwide are fighting in armed conflicts.

Abaraoha says using child soldiers is “an evil that we need to exterminate, and we need to call attention to any system that supports this evil.” Peace & Global Witness Offering gifts help the Presbyterian Mission Agency do just that. 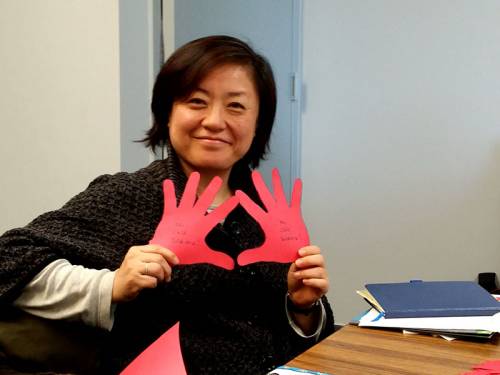 Presbyterians across the country, like the Rev. Eun Joo Kim of New York City, have made paper cutouts of red hands that are part of the Red Hand Day Campaign to end the use of child soldiers. Peace & Global Witness Offering gifts facilitate Presbyterian participation in this endeavor. Courtesy of the Presbyterian Ministry at the United Nations

For example, because of these gifts, the Presbyterian Ministry at the United Nations can encourage and facilitate congregational involvement in the Red Hand Campaign. This international initiative seeks to convince countries to stop using children in warfare.

In conjunction with the campaign, Presbyterians across the country have sent prints or paper cutouts of red hands along with a note to the Presbyterian Ministry at the United Nations. The hands and a cover letter are then sent to countries that have yet to sign a U.N. protocol that forbids the use of child soldiers. To date, 167 countries have ratified the protocol while 30 have not.

Working with global partners, the PC(USA) is involved in initiatives around the world aimed at ending children in combat, sex trafficking, forced labor and other types of human trafficking. Several mission co-workers support these efforts, including Cathy Chang in the Philippines, whose assignment focuses on human trafficking.

Half of the Peace & Global Witness Offering goes to the national church to address human trafficking and other ministries of peace and reconciliation. Twenty-five percent is retained by congregations to address these issues locally and 25 percent goes to mid councils for similar ministries on the regional level.

Most congregations receive the Peace & Global Witness Offering on World Communion Sunday, which is the first Sunday in October.