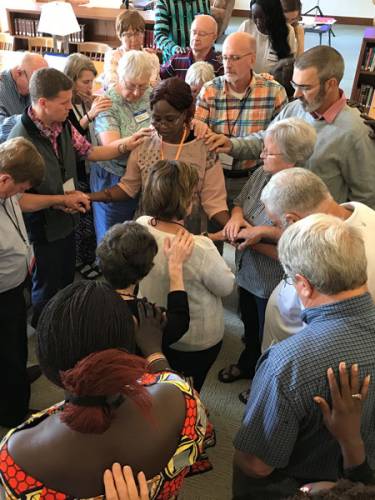 NEW WILMINGTON, Pa. — “Pray for a new Sudan to come” was the heartfelt plea given by Dr. Aida Weran to the members of the South Sudan/Sudan Mission Network that recently met at the New Wilmington Mission Conference at Westminster College in New Wilmington, Pa. Weran is an instructor at Nile Theological College in Khartoum, Sudan, an institution that Weran described as being at the “crossroads of the violence.”

The most recent Sudanese political turmoil is rooted in former President Omar al-Bashir’s ascent to power in 1989. Throughout his nearly 30-year presidency, al-Bashir used his position to increase his personal wealth and benefit his inner circle. In 2003, several ethnic groups in Sudan’s western Darfur region revolted against al-Bashir’s unfair treatment and economic marginalization of the area. Al-Bashir and his inner circle responded by initiating a genocide against all Darfur people, including civilians. The genocide resulted in 300,000 deaths, thousands of rapes and the displacement of millions. The International Criminal Court charged al-Bashir and his officials with crimes against humanity in 2009. Despite being faced with an international arrest warrant, al-Bashir remained the President of Sudan, and the violence and corruption which affected virtually the entire population of Sudan continued.

Representatives from Peaks, Pittsburgh, Redstone, Shenango and Trinity presbyteries as well as many congregations and individuals took part in the 2019 South Sudan/Sudan Mission Network gathering. Many of these Presbyterians have developed deep friendships through decades-long relationships with Nile Theological College and the Sudan Presbyterian Evangelical Church that have been nurtured through visits to Sudan and the U.S. They were especially eager to hear Weran’s account of the situation on the ground in Sudan.

In her appraisal of the situation, Weran said that on Dec. 19, 2018, the people of Sudan began to unite to voice their demands. “Everything exploded because of too much pressure,” Weran explained. Widespread demonstrations erupted due to shortages of fuel, bread, oil and currency. The demonstrators demanded that al-Bashir not run in the 2020 election and that he resign from National Congressional Party. In February, al-Bashir’s regime used excessive violence against these peaceful assemblies and protestors, but daily protests continued. On Feb. 22, the government declared a state of emergency as demonstrations continued.

Weran saw April 6–11 as a pivotal moment in Sudan, as daily protests were held in front of army headquarters. There were tense confrontations between demonstrators and security forces for three days; finally, the army removed Bashir from office and put him in prison. Sudan’s status was “wavering between no peace and no war.”

On May 30, “life stopped in Sudan,” according to Weran. Barriers were frantically put in place to shield the civilians from attackers’ vehicles, as soldiers moved to destroy the main protesters’ camp, known as Colombia Camp. Civilians fleeing the camp were blamed for protests and attacked. The bodies of protesters who were killed were dumped into the Nile River.

On June 3, military and paramilitary forces broke up the sit-in and set the protestors’ compound on fire. All internet service was shut down for civilians. Nearly 100 protestors died and more than 300 were injured. Many detainees were put in jail. Nevertheless, the protest continued, seeking justice for those killed and injured.

Millions of people marched on June 30 to demand justice for the martyrs who died in protests. Nine died and 200 were injured on the way to the National Republican Palace, and the Sudan Professionals Association (SPA) declared two weeks of continuous nightly protests, refusing to sit at the negotiation table after the killings.

On July 3, an Ethiopian representative and an African Union delegate brought both parties to direct negotiations. As a result, 235 captives, political prisoners and other detainees, were freed. The two sides agreed to form a new political council to head a transitional government, and internet service was restored.

In the midst of this chaos, with tear gas canisters being thrown into its campus, Nile Theological College continued to valiantly try to train pastors. Sometimes students and faculty were confined to the Nile Theological College Khartoum campus and could not go out to buy food. Weran explained that during these months of conflict, they held concentrated classes to cover the curriculum. At other times, she was not able to go and teach.

Weran shared one of her harrowing experiences with the mission network. Due to the violence, she was confined to her parents’ home for several days, away from her husband and children. On the fifth day, her brother came to take her home by motorcycle. He got her as far as a bridge that she had to cross by foot in the midst of nearby gunfire, before she found a rickshaw — a three-wheeled motorcycle taxi — to take her home.

In the face of this excruciatingly difficult situation, Weran maintained, “Ending the war is the number one priority. Our leaders must silence the guns and reach an agreement for a final cease fire. Justice must prevail. No one should get away with wrongs committed against others.”

When asked how Presbyterians can pray, she listed the following prayer requests:

Please pray for peace in the Republic of Sudan and throughout the world.

With the people of Sudan who have lost their lives during the ongoing conflict.

With families who have lost their loved ones due to war and genocide.

and violence they have endured.

Lord, we weep with all victims of human rights violations in Sudan and around the world. We pray for a day when all violence ceases and all of your children are treated with the love and dignity that they deserve.

In spite of our weeping, Lord, we also rejoice because you are a good God of justice and mercy.

With the people of Sudan rebuilding their lives.

With the churches who have remained a comfort to their congregations.

With the leaders of Sudan who are coming together to renew efforts for democracy.

In Jesus’ name we pray, Amen

Read more about the ongoing conflict in Sudan: https://enoughproject.org/conflicts/sudan

Read about Sudan from the Human Rights Watch: https://www.hrw.org/world-report/2019/country-chapters/sudan