Presbyterians for Earth Care among those in Glasgow, with PC(USA) ministries following from home 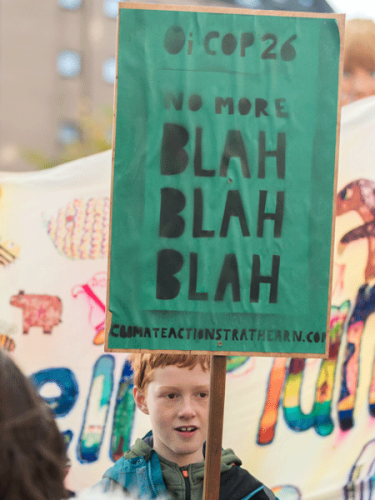 LEXINGTON, Kentucky — A group of Presbyterians has been joining global leaders and activists at the 26th gathering of the Conference of the Parties of the United Nations Framework on Climate Change, also known as COP26, in Glasgow, Scotland.

Members of grassroots groups like Presbyterians for Earth Care, Red Latina, and others along with ecumenical partners have been in the thick of events, while staff from the Presbyterian Ministry at the United Nations and the Presbyterian Hunger Program have been monitoring events from home. Travel for PC(USA) personnel is still highly restricted due to the COVID-19 pandemic.

“All around the world, people, communities, churches, and civil society are raising their voices calling for ambition, for action, for an end to weak commitments,” Burkhard Paetzold, a Presbyterians for Earth Care representative at COP, wrote on a blog post. “It seems widely accepted among the participants that we must listen to science, that voices for radical change are increasingly more powerful, and at the same time as the Act Alliance wrote in a recent press release, we need all peoples voices heard.

“Act Alliance is also criticizing because not all voices are heard. Women. Youth. Indigenous people. People from vulnerable communities,” Paetzold wrote. “They all need to be in the room, at the table, and part of the conversation.”

ACT Alliance, a partner of several Presbyterian ministries, released a statement in response to a UN Environment Programme report on the need for adaptation to the increasing impacts of climate change even as work continues to reduce greenhouse gas emissions.

Rudelmar Bueno de Faria, General Secretary of the ACT Alliance, said, “Adaptation is needed where people live and work, on the local level. We must look for nature-based solutions and ensure that the most vulnerable are reached. Without strong support for adaptation, through funding and also through non-market solutions, including nature-based solutions, the impacts of climate change will be even worse for the most vulnerable people in the world, particularly for women and girls.” 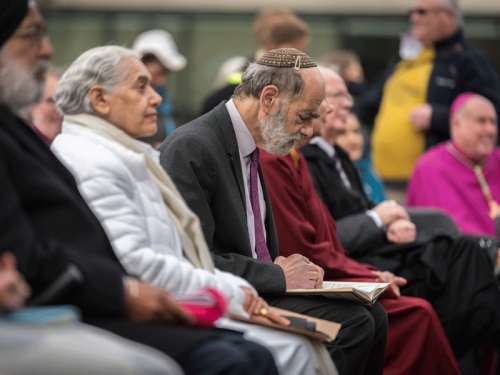 An interfaith vigil held at George Square on the opening day of the United Nations climate change conference in Glasgow, Scotland. The vigil gathered representatives from a range of religions as well as people of no faith to collective pray for all those working for COP26 to be a successful meeting in mitigating what will otherwise be further development towards a climate disaster. (Photo by Albin Hillert, Lutheran World Federation)

Accounts from people in Glasgow included presentations and discussions of many topics including adaptation, divestment from fossil fuel companies, and greenwashing, meaning efforts to put environmentally-friendly faces on corporations and governments that really aren’t that environmentally responsible.

Presbyterians seemed to share a disdain for many speeches from world leaders.

“There seems to be a kind of cynical ‘green-washing’ process that involves making impassioned speeches followed by empty promises,” PEC’s Fred Milligan wrote Friday of presentations by world leaders at COP26. “There’s a growing feeling that they just don’t get the extent of the crisis situation we are really in; that they need to be more ambitious in reference to the kinds of economic and cultural changes they are willing to ask their constituents to make in order to save humanity and the other life on the planet as we know it.”

While this is the UN’s major climate conference, Presbyterian Representative to the United Nations Sue Rheem said on Thursday’s episode of “A Matter of Faith: A Presby Podcast” that the upcoming UN Commission on the Status of Women will also have an environmental focus.

“What we’ve learned in our research is that the impacts of climate change really disproportionately affect girls and women more than any other population,” Rheem said. “And of course, in that even more so are women and girls of color, and indigenous peoples.”

COP26 will continue through Friday.

Here are some of the main places you can follow Presbyterians’ experiences with COP26: