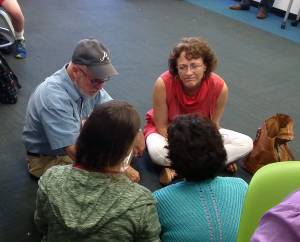 Presbyterians gather in small groups during the Big Tent workshop on Educate a Child. —Rick Jones

Around the corner and around the world, young people can benefit from the power of education. That was the resounding message from leaders of the “Educate a Child” national initiative, during a session at Big Tent last week in Knoxville. Attendees were given an overview of the national efforts and shared their own experiences and suggestions around reaching the younger generation.

“Educate a Child” was officially launched at the 2014 General Assembly. The national portion of the program was announced in April 2015. According to the U.S. Census Bureau, more than 16 million children in the U.S. live in poverty with more than half well below the poverty line.

Church leaders say that translates into higher dropout rates because children do not have access to a quality education and quit in the ninth or tenth grade. Adding to the problem is a growing shortage of teachers. The U.S. Department of Education reports significant shortages of teachers in math, science, special and bilingual education. Presbyterian Mission Agency teams are working both nationally and internationally to strengthen early childhood education and reduce the adolescent dropout rate.

The national initiative is heavily promoting the role of the community church in reaching children who are struggling in school. Whether through after school programs or collecting school supplies, organizers say churches can make a difference.

Eileen Lindner, pastor of a Presbyterian Church in Tenafly, N.J., and consultant on the national initiative, shared statistics showing nearly a third of all households in the United States have children in public schools. Approximately 16 percent attend a Presbyterian Church.

“More than 50 percent of Americans believe we spend too much on public education,” she said. “But only four percent of Presbyterians believe that, which shows we are willing to give our treasure to this cause.”

Lindner and national coordinators, Alonzo Johnson and Ginna Bairby, had high praise for a number of churches that have reached out to their communities seeking to help children in need. All three agree churches have a responsibility to step up, referring to Matthew 18.

“Better for you to have a millstone hung around your neck … than to cause the little ones to stumble.”

Program leaders said this is especially true when it comes to diversity.

“For children of color, their lives are being squandered by systems in our culture that force them out of education and put them in the pipeline to prison,” said Lindner. “Before a child is born, we as a society are building a prison bed for them. Shame on us.”

During small groups, the attendees shared stories of how their churches, presbyteries and synods are reaching children in their communities. One attendee urged the group “Find an elementary school near you and adopt it, meet with the principal and staff on a monthly basis and simply ask how you can help. You might not be able to do anything, however, you might recruit some mentors or buy books for children in need.”

One woman told the group that sometimes a family resists help from the church. “In our church we recognize there are times when children begin to show promise and enthusiasm around education and the families don’t like it or are threatened by it. Our church has offered scholarships to children in need but on average only 20 percent will ever take the scholarships because the parents are mad at them.”

Church members were encouraged to get involved at the policy level by increasing their involvement with local school boards, learn more about dropout rates in their communities or support legislation for better schools.

“We baptize infants in the church, but it has no meaning whatsoever if our deeds don’t match our words,” said Lindner. “We should keep the promises of baptism or stop making them.”