‘The Ants & the Grasshopper’ features Anita Chitaya, a Malawian activist who tries to convince US farmers and politicians about the devastating impacts of climate change 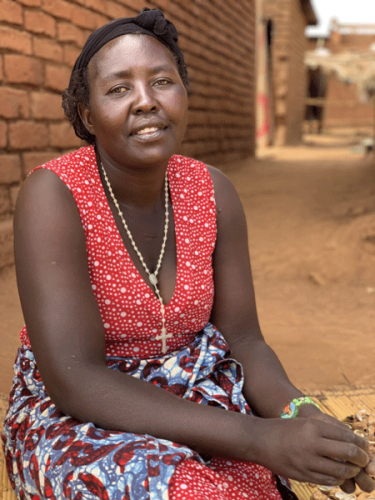 Malawian activist Anita Chitaya is at the center of the 2021 documentary “The Ants & the Grasshopper.” (Photo curtesy of the filmmakers)

LOUISVILLE — Nearly 500 people from 13 countries gathered online Thursday night for a screening and discussion of the documentary film “The Ants & the Grasshopper.” The Presbyterian Hunger Program and Office of Public Witness organized the gathering and led a panel discussion following the screening.

Watch the film’s trailer here. Learn more about the film, directed by Raj Patel and Zak Piper, here. Additional resources on the film, including an action toolkit and a Bible study, are here.

The film’s subtitle is provocative: “How do you change someone’s mind about the most important thing in the world?” That’s the task of the film’s central character, Anita Chitaya, who comes from a remote village in Malawi that’s been heavily impacted by climate change. Water availability is down significantly. Crops aren’t as plentiful or as healthy as they once were. When the rains do come, they’re often torrential, taking out crops and structures.

The women and children in the village are also impacted by patriarchy. An early focus during the film is Anita’s neighbor, Winston, who sees food preparation, cleanup and other important domestic chores as women’s work. He refuses to come to the aid of his wife, who’s clearly overworked and underappreciated.

Along with her friend, Esther Lupafya, a village medical provider and the co-founder of a local organization, the Soils, Food and Healthy Communities project, Anita comes to the United States to meet with farmers who operate both traditional large-scale enterprises and smaller organic farms. They also try to speak with members of the Biden administration, but no one will see them. Only one U.S. senator — Jeff Merkley of Oregon — agrees to meet with the Malawi contingent, who’ve been flown to the U.S. by those making the film, which was crowdsourced. 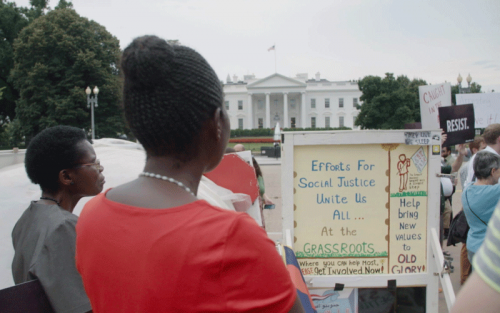 Esther Lupafya, left, and Anita Chitaya were turned down for meetings with most elected officials. (Photo courtesy of the filmmakers)

While the U.S. farming families Anita and Esther engage are sympathetic to the problems caused by climate change in Malawi, many are reluctant to change their farming practices. “It’s climate change we don’t see because it’s not here,” one farmer tells the visitors. “I have always tried to be a sustainable efficient producer, but how can we change the whole system?” asks another. “It’s a hard one to figure out. It would take a global catastrophe to do a complete 180.”

On occasion, Anita’s message rings true with some in the U.S. One such stop is in Detroit, where she meets with Malik Yakini, co-founder and executive director of the Detroit Black Community Food Security Network, which operates D-Town Farm. Yakini joined Thursday’s panel discussion, as did Patel, Valéry Nodem and Andrew Kang Bartlett of the Presbyterian Hunger Program, and Catherine Gordon of the Office of Public Witness, who makes a cameo in the film. 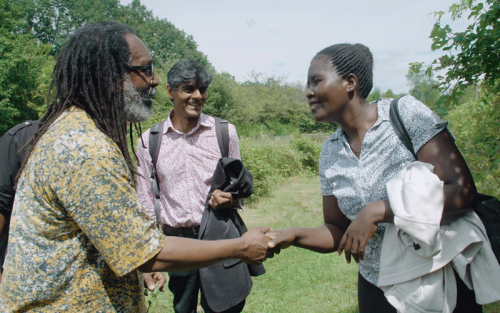 Malik Yakini, left, shakes hands with Anita Chitaya. In the background is the film’s director, Raj Patel. (Photo courtesy of the filmmakers)

“If there is any salvation for people in the West,” Yakini said during the panel discussion, “it will come from the humility of learning from indigenous people.”

“We distrust experts who really know their context. They have been growing food for generations, and yet their voices are suppressed,” Nodem said.

Nodem spoke about the work a PHP partner is currently doing in Malawi.

“The social norms we saw in the movie are very much in line with what we are seeing with the organization we are working with,” Nodem said. “‘Empowerment’ is a key word to help women achieve a lot on their own.” A woman-owned bakery has been constructed in a Malawian village that rarely sees fresh bread. Next year, the women plan to start raising chickens to supply their bakery with eggs.

“Watching this movie and seeing Anita, who could get people to move and change their mindset, is very much what we have been feeling,” Nodem said.

Asked during the panel discussion how Anita came to be at the center of the film — she’s also the principal narrator — Patel said he journeyed to Malawi and brashly announced there, “We’re from America and we are here to tell your story.”

There were three women in the rear of the tent “throwing shade” at the visitors, Patel said, and so he and his colleagues decided to sit down with them. “Anita really popped,” said Patel, a research professor at the Lyndon B. Johnson School of Public Affairs at the University of Texas at Austin. “She’s been through the most horrific things [including a forced marriage that involved her being kidnapped and locked away for a time] and yet she’s fighting back.”

“They saw potential for Winston to change even before it happened,” Yakini said.

The Rev. Dr. Diane Moffett, the president and executive director of the Presbyterian Mission Agency, was one of the 500 or so people to take in the screening and the discussion afterward.

“You have to have prophetic imagination to see something different,” Moffett said, adding that the filmmakers and their work with PMA entities including PHP and the Office of Public Witness are only the most recent examples of living out the PC(USA)’s Matthew 25 invitation and its intersectional priorities of halting climate change and ending heteropatriarchy. 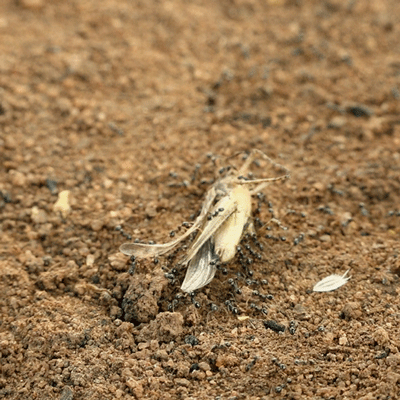 It takes a lot of ants to carry away a grasshopper. (Photo courtesy of the filmmakers)

“It is so powerful to see the persistence of Esther and Anita. They were humble but wise,” Moffett said. “Thank you so much for the work you’re doing. My prayer is we will continue as a church to develop a movement that will bring new life for all Creation.”

“Anita is a fighter,” Patel said, adding that reaching her via cellphone requires Anita to climb the tallest hill near her village and wave the phone over her head as she seeks coverage. “She does it with grace and vision, and she knows right from wrong.”

The change that’s needed to bring about her vision “is incredibly radical,” Patel said. “It is too hard to do it alone, and so we must do it together. With a great deal of organizing, we can make this transformation happen.”

The filmmakers are offering free community screenings of “The Ants & the Grasshopper,” which derives its name from this line in the film: “There are so many ants, but only a few are lifting the grasshopper.” Learn more about hosting a screening here.