Share God’s love with our neighbors-in-need around the world through One Great Hour of Sharing.
Make A Donation Click Here >
Home › Presbyterians to join thousands for People’s Climate March in Washington 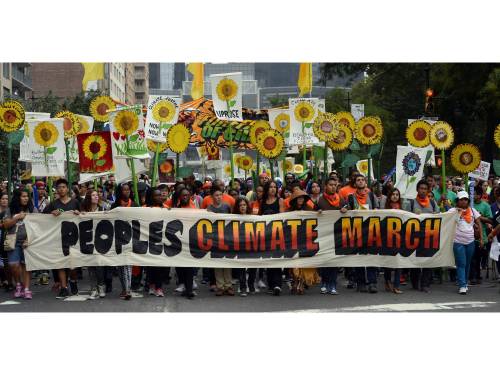 Marchers make their way across Central Park South during the People’s Climate March on September 21, 2014, in New York. (Photo by Timothy A. Clary/AFP/Getty Images)

LOUISVILLE – More than 100,000 people are expected to take to the streets of Washington, D.C., on April 29 for the People’s Climate March. Thousands of activists, organizations, schools and churches will call on U.S. and other world leaders to do more to protect the environment. Activists have voiced concerns that many of the White House’s new policies will adversely impact progress that has been made.

Organizers say a faith contingent will be a part of this year’s march. Groups such as GreenFaith and Creation Justice Ministries are working with a number of denominations to pull it together.

“In the lineup of the march, the faith contingent will be at the back,” said Shantha Ready Alonzo, executive director of Creation Justice Ministries. “We are planning to have signs and banners to identify the various groups and organizations.”

Alonzo says a number of prayer services are planned prior to the march, including one at the Church of the Reformation as well as the United Methodist building at 10 a.m. A Catholic mass is planned and Alonzo says there will be a time for Muslim prayer at noon on the day of the march.

“Awareness of climate has taken on a new tone this year. In 2014, people found it was an exciting moment and felt the world was about to do something big as it relates to the environment,” Alonzo said. “Now there’s a larger awareness that no one will take responsibility for the environment but you and me. We have to show our moral commitment of taking responsibility for an action and we want our elected officials to do the same.”

“By being a part of this march with a large group of people, physically showing concern for climate jobs and justice, I think we send a message to the world that we care,” said Jane Laping, coordinator for Presbyterians for Earth Care. “There is a special significance to this march. I had no interest in the one in 2014, but when I heard about this one, I said I was going to attend. It’s energized a lot of people and I’m one of them.”

New York City was the site of the historic climate march in 2014. An estimated 400,000 people participated just days before world leaders gathered in the city for the United Nations Climate Summit.

This year’s march is scheduled to begin in front of the Capitol Building at Third and Jefferson SW and continue along Pennsylvania Avenue toward the White House. The event will conclude with a gathering at the Washington Monument grounds complete with music, climate updates and stories.

“There are two things that make a march effective. First of all, it gets people energized and hopefully it will stay with them until they get back home. We are already seeing so much energy and we have so many new people getting involved. I see this happening around the country,” Laping said. “The other thing is it sends a global message that the image being presented for this country is not exactly what we as a caring people believe.”

Among those attending the march in Washington will be Andrew Kang Bartlett, associate for national hunger concerns with the Presbyterian Hunger Program.

“We may say we live on the earth, but in fact, we live in it. Our atmosphere is a rare and precious substance that envelops the planet and each of us,”  Kang Bartlett said. “It is rich substance, full of gases, pollen and moisture, which allows all above-surface dwellers to survive. We live in the atmosphere. It is the planetary womb that cradles and protects us from the harsh vacuum of space. We harm it and we harm ourselves and countless species.”

The Rev. Rebecca Barnes, coordinator for the Presbyterian Hunger Program, took part in the New York march in 2014. She believes it can make a difference to decision-makers on Capitol Hill.

“Many Presbyterians are attending the climate march as part of their Christian witness for God’s good creation,” Barnes said. “Presbyterians march for love of and protection for the earth. In line with decades of General Assembly policies about taking care of the earth, and with hundreds of Presbyterian churches across the country working to conserve energy and celebrate the beauty and majesty of the Creator as seen in creation, it is no surprise that many Presbyterians will gather in the Capitol to stand in line with their faith principles.”

“The Presbyterian Hunger Program joins with other Presbyterians, climate justice activists, food sovereignty proponents and millions of others around the U.S. who care for the planet and call on our leaders to respond strongly and quickly enough,” Kang Bartlett said. “The crisis is upon us and the time is now.”

Click here for more information about the march. Laping and Barnes say those interested in participating should find out about the faith contingent.

The work of the Presbyterian Hunger Program is made possible through gifts to the One Great Hour of Sharing.