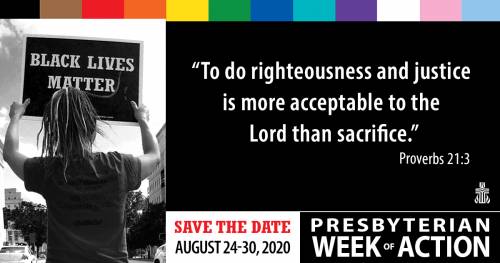 LOUISVILLE — According to UN Women, the United Nations entity dedicated to gender equality and the empowerment of women, it’s estimated that 35% of women worldwide have experienced either physical and/or sexual intimate partner violence or sexual violence by a non-partner (not including sexual harassment) at some point in their lives. Some national studies show that up to 70% of women have experienced physical and/or sexual violence from an intimate partner in their lifetime.

The Human Rights Campaign reports that in 2018, advocates tracked at least 26 deaths of transgender or gender non-conforming people in the U.S. due to fatal violence, the majority of whom were Black transgender women.

Throughout the year Presbyterian Women, Inc. and Presbyterian women have joined the World Council of Churches in Thursdays in Black to protest gender-based violence.

On Thursday, August 27, as a part of the Presbyterian Week of Action‘s BLACKOUT Day, Presbyterians across the country and around the world are urged to wear black in solidarity with both Thursdays in Black and the struggle for Black lives.

“Sexism, including gender-based violence, cannot be separated from racism,” Izumi said. “Almost 60 years later, God’s call to us to seize the moment is still reverberating. We must take leadership in the charge to end violence against women and the systemic racism and sexism that perpetuate it.”

On Thursday, Presbyterians are encouraged to adopt the following practices recommended by the WCC:

Additionally, Presbyterians are invited to