The church is responding to the Syria-Turkey earthquake, GIVE NOW!
Make A Donation Click Here >
Home › Presbyterians for Earth Care meet with Native Americans in the northwest 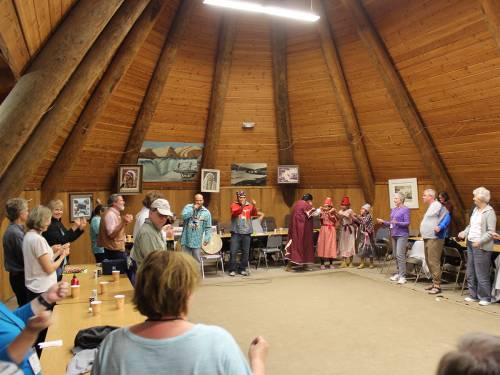 CORBETT, Ore. – It was partly cloudy and windy on Monday, as Be’sha Blondin, with the Yellowknife Tribe, led a “Fire and Water” ceremony along the river banks at Celilo Park. Joined by attendees of the Presbyterians for Earth Care (PEC) Conference, Blondin sang to the east, west, north and south and along with the rest of the group, poured water and placed a piece of tobacco into the river. It was part of a two-day program that allowed attendees to hear and learn about traditions dating back thousands of years.

Their visits included a stop at the Bonneville Dam where a spokesman described how the dam has generated “$188 million of electricity for the region at an operating cost of $30 million.” The spokesman went on to say that engineers have worked to protect the fish that live in these waters and that the numbers are growing. 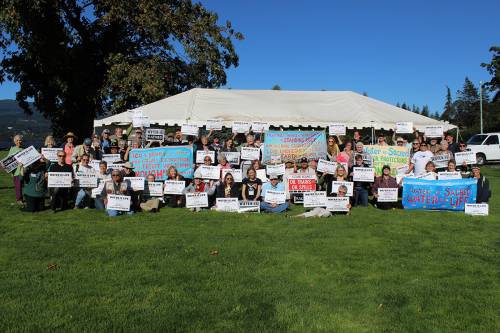 As dams have dotted the river, Gregory says they’ve created challenges for the salmon to swim upstream, estimating that nearly half don’t make it to spawning grounds. As a result, the population drops and the impact is felt by Native Americans who depend on the salmon to feed their villages and make a living. 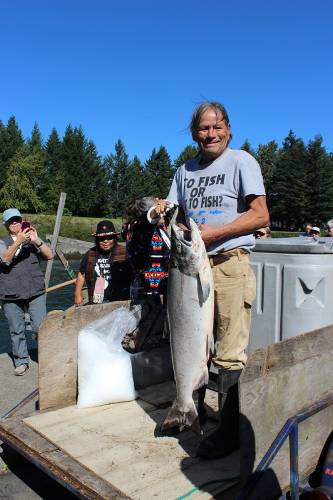 On Tuesday, the group visited the fishing platforms in Cascade, where they met Ralph Jones, a Native American who has fished the area for more than 50 years.

Elke and Alysia Littleleaf are members of the Confederated Tribes of the Warm Springs and operate a fly fishing business. Elke says the drop in the number of salmon has significantly hurt his business.

“We know that the cause is human and it is unnecessary,” he said. “If we don’t take care of the rivers and oceans, they won’t take care of us. We must stop taking and give back to Mother Earth. She has provided for us for thousands of years but now things are getting worse and we see it every day.”

The PEC conference continues through midday Friday at the Menucha Retreat and Conference Center in Corbett.