Group calls for boycott of companies connected with DAPL 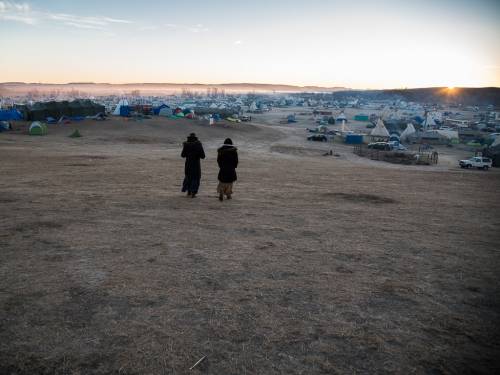 LOUISVILLE – As the remaining residents of Oceti Sakowin camp in North Dakota face evacuation, Presbyterians for Earth Care (PEC) has issued a call to action, urging people of faith to stand against the construction of the Dakota Access Pipeline. In its statement, PEC says the pipeline desecrates God’s creation and poses significant threats on the Standing Rock Reservation.

For nearly a year, the Standing Rock Sioux Tribe and its thousands of supporters have camped along the Missouri River, in opposition to the proposed route of the 1,172-mile pipeline just north of the reservation. Earlier this month, the Army Corp of Engineers granted a final permit to allow the work to continue.

“Leakage from the DAPL can pollute not only the drinking water of the Standing Rock Tribe, but also the drinking water of millions along the Missouri River south of the pipeline,” the PEC statement reads. “There have been high numbers of pipeline spills each year such as in Iowa, Missouri and North Dakota. Leakage not only puts oil into the water but carcinogens such as benzene, toluene and xylene.”

PEC says the pipeline “promotes dependence on fossil fuels” and believes investments and resources should be directed toward developing sustainable sources of energy. The organization believes the pipeline project violates sacred land and treaties and continues to promote geographical racism in the U.S.

“This is another example in the long history of geographical racism against people of minority ethnic groups by taking away their land or placing them in undesirable locations without consultation or agreement,” the statement reads. “Along the Missouri River, five dams were built in the 1940s and 50s without proper consultation with tribes whose fertile lands were taken away by the resulting man-made lakes.”

The Army Corp wants those in the camp to move so it can clean up the land before the river thaws and floods the area. There are still approximately 200 people remaining at the camp and they have been given until Sunday to leave. Water protectors are asking for more time so they can continue cleaning up the area.

PEC is urging its members, Presbyterians and others to take a number of actions including defunding banks that support DAPL and boycotting Sunoco, Phillips 66, Chevron and Conoco who are associated with Energy Transfer Partners and DAPL.

“We need to stand with all of these tribes that have been placed on the backburner for hundreds of years. This is a chance to put repentance into play,” said the Rev. Holly Hallman, northwest regional rep for PEC. “Standing Rock is the icon we turn to, but it is a symbol of a much larger task, standing with indigenous people as they face utter and complete degradation of this land.”

“We are disheartened that the pipeline moves forward without completing the agreed upon Environmental Impact Statement, and that treaty and human rights continue to be ignored in a time when the Presbyterian Church (U.S.A.) and others have been called to repent and apologize for past pain and suffering endured by Native Americans,” said Rebecca Barnes, coordinator of the Presbyterian Hunger Program. “We pray God’s protection and grace be with those at the Standing Rock camps as this pipeline — questioned by so many, including our own denomination leaders — moves forward.”

The Rev. Abby Mohaupt with Fossil Free PCUSA, spent time at the camp last November and says it was transformative for her heart and soul.

“As a Presbyterian pastor committed to earth care, I’m aware of our corporate addiction to fossil fuels that led to the desire to lay the pipeline despite the work of the water protectors,” she said. “But this bit of disaster calls us to stand in our own watersheds. May we trust the impossibility of the resurrection and may this moment call us to love the watersheds we call home.”

Meantime, Standing Rock and other native nations will lead a march in prayer and action on March 10 in Washington, D.C.

“If you know of someone in D.C. or have a way of getting there, it is so important to support the various tribes,” Hallman said. “This is a place for us to repent and stand firm with our indigenous partners and begin to undo some of the wrongs.”

Click here for more information on the D.C. march.