…be led forth in peace. (Isaiah 55:12). Support to the Peace & Global Witness Offering.
Make A Donation Click Here >
Home › Presbyterians contribute to new book on race 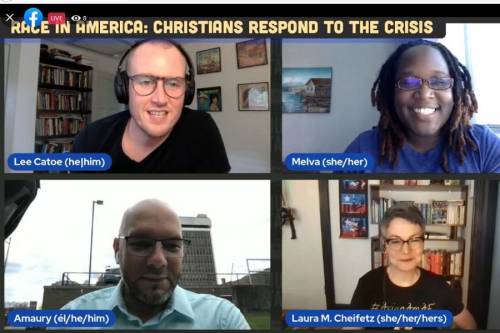 The Rev. Lee Catoe and Melva Lowry co-hosted Tuesday’s episode of “Just Talk Live,” which featured the Rev. Laura M. Cheifetz, a co-editor of the book “Race in America: Christians Respond to the Crisis,” and the Rev. Dr. Amaury Tañón-Santos, who contributed content for the book. (Screenshot)

LOUISVILLE — The latest episode of “Just Talk Live” aired Tuesday with the specter of yet another police-involved shooting of a Black man looming overhead.

“We’re going to acknowledge, again, another murder by police,” said the Rev. Lee Catoe, who co-hosted this particular episode with Melva Lowry, a ruling elder in the Presbytery of Greater Atlanta.

Catoe was referring to 20-year-old Daunte Wright being killed during a traffic stop in the Minneapolis suburb of Brooklyn Park on Sunday. The shooting by an officer, who allegedly meant to tase Wright, has sparked a series of protests in a state already rocked by the death of George Floyd and the ongoing trial of Derek Chauvin, the police officer who kneeled on Floyd’s neck for more than nine minutes.

In remembrance of Wright, Catoe said, “We’re going to say his name and hold his family in our prayers, and then also recommit to dismantling racism and white supremacy, and our prayers need to be backed by action.”

Catoe’s comments were a prelude to the show’s main topic, a newly updated book, “Race in America: Christians Respond to the Crisis,” published last month by Westminster John Knox Press.

Cheifetz, an ordained teaching elder in the Presbytery of Middle Tennessee, is one of the book’s co-editors. Tañón-Santos is a ministry member in the Albany Presbytery and wrote a chapter on colonization, racism and assimilation.

The book started as a project by the Rev. David Maxwell, one of the co-editors and a vice president at Presbyterian Publishing Corporation, who was putting together a multi-session study packet for The Thoughtful Christian. It was first published as a book in 2016 as “Race in a Post-Obama America.”

The revised version includes contributions from a diverse group of pastors, academics and activists and includes updated material on topics such as police brutality, immigration, digital media and Black Lives Matter, according to a book description.

Cheifetz said she felt that Black Lives Matter needed “its own chapter because it deserves multiple books, and there are multiple great books out there.”

The Trump administration’s negative effects on immigration policy and other issues also were something Cheifetz felt needed to be explored. 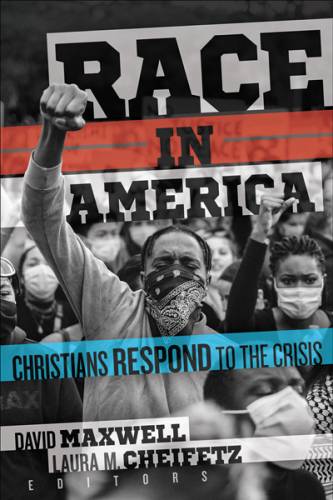 “I ended up contributing a whole chapter on Trumpism because it was such a distinct departure” from the previous administration, Cheifetz said. “Everything was like racism and xenophobia on steroids, with Stephen Miller being in the White House and writing a lot of policy.”

The book also takes on the history of racism and includes action plans for moving toward antiracist work and racial justice, according to the book description.

In Tañón-Santos’ chapter, he sets out to show the connections between colonization and the mistreatment of marginalized people in the United States and elsewhere today.

“One of the gifts of this book,” he said, is that “solidarity will be built once we realize that the reason people of African descent in the Americas are treated the way they are, peoples who are indigenous in the Americas are treated the way they are, are all connected and part of one core project and that is white supremacy, that from the beginning and at its core had a connection to the church giving it relevancy and an excuse to exist, based on Scripture, based on theology, seeking to expand not Christianity but a very white, very Western European way of it.”

The editors hope the book will motivate people to make positive changes. It includes “some very concrete things that people can do,” Cheifetz said. “If you have the right onramp and it clicks for people, then they’re going to be motivated to go out and learn more and seek out relationship and make mistakes and figure out what’s the doing of all of this — beyond just the learning.”