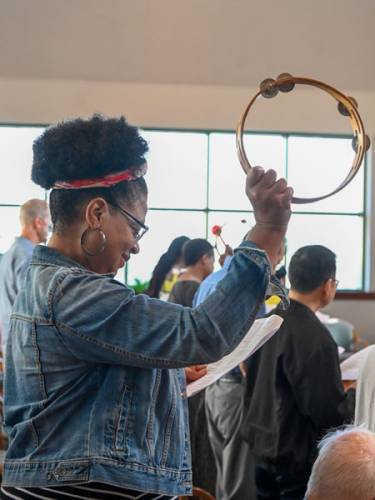 LOUISVILLE — From Sept. 15 through Oct. 15 the United States celebrates National Hispanic Heritage Month. During this period the country recognizes and honors the rich history and contributions made by Hispanic and Latino-a Americans.  Hispanics/Latino-a are the largest people of color group in the United States and the third-largest people of color group in the Presbyterian Church (U.S.A.).

According to the Office of the General Assembly statistics, about 2 percent of members of organized congregations are Hispanic about — 17,000 all in all. This does not include folks involved in new church developments, fellowships, and new worshiping communities. And, according to research conducted for the 1001 ministry by the PC(USA) Research Services, about 15 percent of participants in some worshiping communities linked with the Presbyterian Mission Agency’s 1001 NWC initiative are Hispanic.

To further celebrate National Hispanic Heritage Month, a special worship service was held Wednesday at the Presbyterian Center in Louisville. Worshipers experienced the Hispanic culture through music and witness. And what a celebration it was! 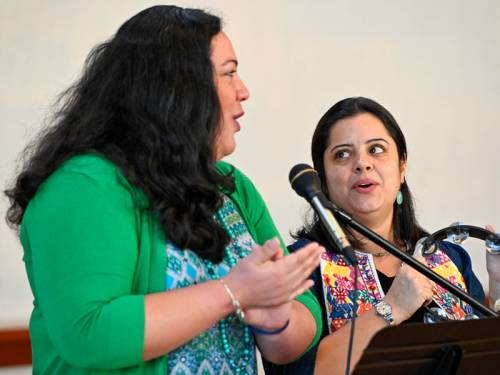 Flor Vélez-Díaz and the Rev. Alexandra Zareth were among the singers leading worship Wednesday at the Presbyterian Center Chapel. (Photo by Rich Copley)

The unique worship service was conducted completely through music rather than the spoken word. The rhythmic and melodious hymns sung during the service were selected from the hymnal “Santo, Santo, Santo,” which means “Holy, Holy, Holy,” a bi-lingual hymnal produced by the Calvin Institute of Christian Worship and GIA music publishing company. The hymns printed in Spanish and English allowed worshipers to participate in their individual languages while singing in one voice. “When we sing from the ‘Glory to God Hymnal,’ the songs are written in English and translated into Spanish,” said Flor Vélez-Díaz, Manager of Judicial Process and Social Witness in the Office of the General Assembly. “The ‘Santo, Santo, Santo’ hymnal has hymns written in Spanish and they are unique to the Hispanic culture. They are translated into English. These are the hymns I grew up with in my church in Puerto Rico.”

“Music plays an integral part in Latino worship,” said the Rev. Marissa Galván-Valle, Spanish Language Editor for the Presbyterian Publishing Company. Galván-Valle, along with the Rev. Alexandra Zareth, Velez-Diaz and Stephanie Vasquez served as the planning team for Wednesday’s service. 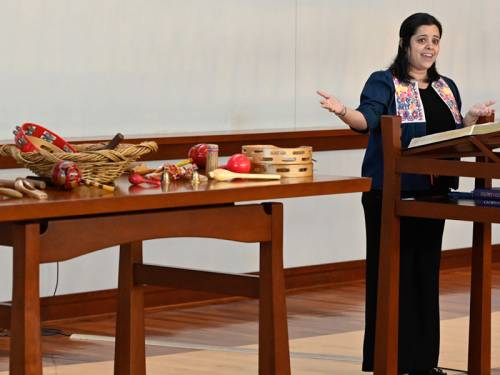 “We thought it would be a meaningful experience to expose the individuals at the Presbyterian Center to the way Hispanic Presbyterian churches worship,” Galván-Valle said. In addition to singing upbeat hymns, worshipers were invited to take an active part in the service by grabbing a tambourine, maraca or a number of other hand-held instruments made available. Along with the special music, the service offered a time for individuals to give personal testimonies.

In the PC(USA), Hispanic/Latino-a people are involved in evangelism, church growth, worship renovation and the provision of a new vision for the mission in this century. They also serve in various leadership roles throughout the church. 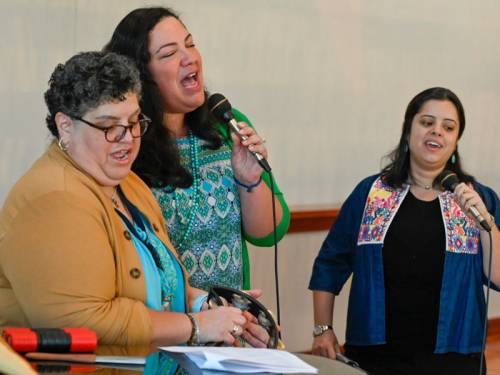 A trio led about 50 minutes of upbeat hymn singing during Wednesday’s service at the Presbyterian Center Chapel. From left are the Rev. Marissa Galván-Valle, Flor Vélez-Díaz and the Rev. Alexandra Zareth. (Photo by Rich Copley)

One such leader is Yenny Delgado, a ruling elder at Bethesda Presbyterian Church in Bethesda, Maryland. Delgado actively participates in the social action and outreach her church offers to the community.

When asked about the impact the Hispanic /Latino-a culture has on the Presbyterian Church (U.S.A.), Delgado said, “Hispanic/Latino culture is heterogeneous and represents a myriad of ideas, dialects and culture and is not one monolithic worldview. With this as context in looking at my local church and more generally my presbytery I think we have a way to go in terms of embracing differences in our local and global community.  In my church there has been little impact of cultures outside of a predominantly European descendant view on much of the music, teaching and flow of the service.”

“I don’t feel that the Church has embraced the Latino-a culture during worship and other aspect of church service,” she said. “Unfortunately, I believe that the Church’s embrace of Latino culture mirrors that of the society but potentially 25 years in the past.  Essentially, what I mean is that the focus on Latino/Hispanic culture occurs primarily during the month of heritage and remembrance. However, through the rest of the year there is considerably less mention of the culture, songs or traditions, which is likely a result of the makeup of the congregations and churches.”

“However, with shifting demographics there is a definite need to ensure that all our faith is not just defined by the tribe we are from but embraces a more inclusive vision, echoing the Pauline vision of Galatians 3:28 where we are all one in Christ Jesus.”

Delgado believes that it is important for the nation and the Church to recognize and celebrate National Hispanic Heritage Month. 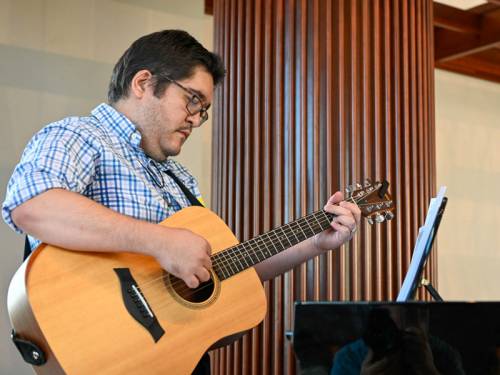 Marcos Hong played both guitar and piano during worship Wednesday at the Presbyterian Center Chapel in Louisville, Ky. (Photo by Rich Copley)

“This month should be a time not only for parades, songs, and special hymns, but also for reflection on history and a healing process,” she said.  “As a Native American whose mother’s tongue is Spanish and growing up outside of the United States, I have struggled with understanding the terms and definitions of Hispanic as well as Latino.  I think for the church to really be a more welcoming place it starts with inclusion and understanding.”

Delgado says that given this historical framework, it is important for the country and the church to commemorate a month of both recognition and celebration.

“However, this month should also provide a space for historical reflection on the years of trauma as a result of the atrocities committed by the European invasion and its colonies that killed millions of indigenous people and seized their lands,” she said. “I think it is important to note that before Oct. 14 (Second Monday in October) was considered Columbus Day, now several states are celebrating Indigenous Peoples’ Day as a sample of historical reflection.”