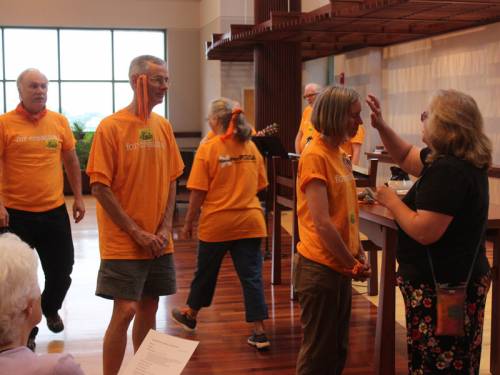 Participants in the walk to St. Louis gather for worship at the Presbyterian Center before beginning the 260-mile journey. Photo by Rick Jones

LOUISVILLE – With gray and overcast skies above them, a group of 25 to 30 people gathered at the Presbyterian Center in Louisville on Friday morning to begin a two-week trek to St. Louis on foot. The PC(USA) Walk for a Fossil Free World is a joint project of both the Presbyterian Peace Fellowship and Fossil Free PCUSA to stand against investment in the fossil fuel industry.

The issue of total divestment from fossil fuels has been a major topic at General Assembly gatherings for years. During the 222nd General Assembly in Portland, Oregon, the Immigration and Environmental Issues Committee recommended divestment by a vote of 31–25, but commissioners voted to continue the church’s current policy of corporate engagement in the hope that companies would work with them to reduce pollution.

Divestment supporters feel the time for talk has ended and words should be replaced with action.

“I hope that the General Assembly is able to respond positively to this broad grassroots movement in support of radical change in relation to climate justice,” said the Rev. Emily Brewer, executive director of Presbyterian Peace Fellowship. “Divestment is part of the whole shift of how we act and live and be in the world. I hope the church sees the wide support for this and takes bold action accordingly.” 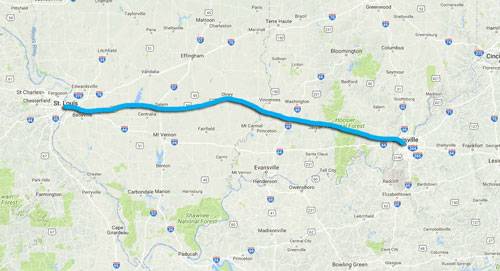 Before the walk began, participants and supporters gathered at the center’s chapel for worship and blessing. The Rev. Bob Turner, stated support for the First Presbyterian Church of Paoli, Indiana, offered words of encouragement.

“You are seeking to do something that is politically misunderstood and are taking a journey that is theologically uphill,” he said. “You are following the path of Lincoln from Kentucky, through Indiana and Illinois. Lincoln was a peacemaker, working to end war. We hope your war will reach a conclusion that is favorable to both sides.”

The 260-mile journey will include teach-ins and worship centering around stories and experiences of those working to address climate change. Participants are expected to conclude the walk on June 16.

“We have three asks for the walk. First, we want to help other people around the country understand the importance for the church to divest from the fossil fuel industry,” said the Rev. Abby Mohaupt, moderator of Fossil Free PCUSA. “The second is to listen and learn from people who are either in the front-line communities or experts on climate change. Thirdly, we want to lessen our footprint as we get to General Assembly. Instead of flying, we’re walking.”

Among those taking part in the walk is Rick Ufford-Chase, moderator of the 216th General Assembly.

“We are going to meet some amazing people on our walk across Indiana and Illinois. I’ve been doing a lot of work on logistics to get housing lined up and I’m so excited about all of the people who have gotten excited, even if they don’t fully understand what this is about,” he said. “It gives us a chance to tell the story about why climate change is real and right now.” 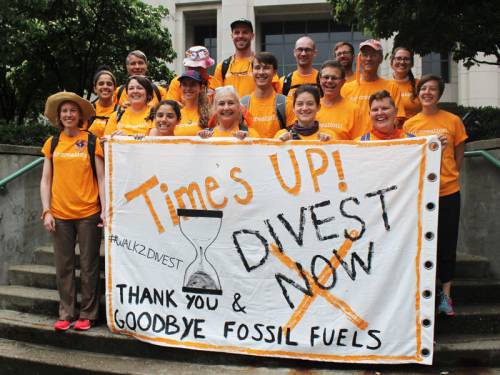 So far this year, as many as 40 presbyteries have gone on record in support of an overture calling for divestment. However, the Committee on Mission Responsibility Through Investment (MRTI) has argued that divestment should be a last resort and that engagement with the fossil fuel industry is the best way to address the issue.

“We wish the Presbyterian Peace Fellowship, Fossil Free PCUSA, and all those participating in the walk a safe and productive journey. We agree climate change is an urgent threat to God’s creation, and the church must respond,” said the Rev. Kerri Allen, MRTI Environmental and Climate Change committee member. “We believe that response must include a number of faithful tactics, including continued dialogue as well as grassroots pressure. The more Presbyterians involved in putting pressure on corporations, the better.”

Allen added that pressure has led MRTI to join Climate Action 100+, an international coalition of 279 investors representing $30 trillion in assets. 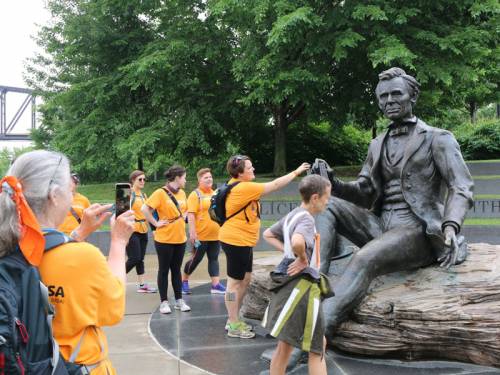 Participants in the walk to General Assembly, began their journey at the statue of Abraham Lincoln. Photo by Randy Hobson

“That’s an astounding one-third of the world’s invested assets,” said Allen. “These investors are working together to pressure the 100 companies who are the largest emitters of greenhouse gases to make tangible changes towards a low-carbon future.”

Ufford-Chase hopes commissioners at General Assembly will see there is only one viable option.

“One way or another, divestment is going to happen. There is no future in fossil fuel. We’ve been building a movement,” he said. “In 2014, there were 12 presbyteries in agreement to divest. In 2016, it was 31 and this time there are 40 presbyteries that want the church to fully divest from fossil fuel for the future. It’s the right thing to do.”

The Presbyterian Peace Fellowship began in the 1940s to support conscientious objectors to World War II. In 2015, its Activist Council voted to divest its own endowment from the top 200 carbon companies and has worked to help other Presbyterian organizations do the same.

Since 2012, Fossil Free PCUSA has worked within the denomination, calling for divestment from oil, gas and coal companies.

MRTI was created in recognition of the church’s opportunity to advance its mission through the financial resources entrusted it. MRTI implements the General Assembly’s policies on socially responsible investing (also called faith-based investing) by engaging corporations in which the church owns stock.