The church is responding to the Syria-Turkey earthquake, GIVE NOW!
Make A Donation Click Here >
Home › Presbyterians asked to support the right to boycott 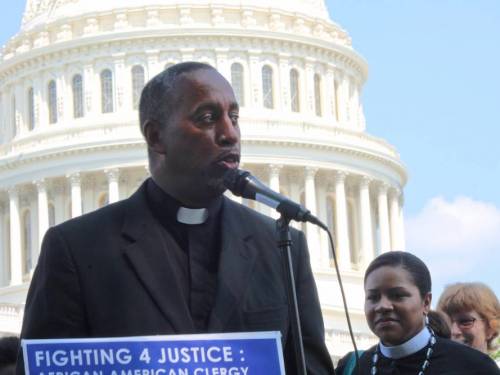 The Rev. Jimmie Hawkins is director of the Office of Public Witness. The Washington Office, as it’s known, issued an Action Alert Thursday urging Presbyterians to support the right to boycott in pursuit of civil and human rights at home and abroad. (Contributed photo)

LOUISVILLE — The Presbyterian Office of Public Witness issued an Action Alert Thursday requesting Presbyterian support for House Resolution 496, which affirms that all Americans have the right to participate in boycotts in pursuit of civil and human rights at home and abroad.

The resolution, introduced by Reps. Ilhan Omar, D-Minnesota, Rashida Tlaib, D-Michigan and John Lewis, D-Georgia, affirms that such boycotts are protected by the First Amendment to the Constitution.

“In a political environment where civil liberties and freedom of expression are increasingly coming under attack, H.Res 496 reaffirms that all Americans are free to engage in economic measures to protest injustices everywhere in the world,” the Action Alert states. “We uphold the right to find appropriate and various ways to end unjust practices and policies that violate international laws and conventions, including exerting economic leverage on commercial and government actors.”

On the floor of the House of Representatives, Tlaib said that “the right to boycott is deeply rooted in the fabric of our country … Some of this country’s most important advances in racial equality, and equity, and workers’ rights have been achieved through collective action, protected by our Constitution. Americans of conscience have a long and proud history of participating in boycotts, specifically to advocate for human rights abroad.”

Boycotting injustices in an effort to effect change “is a time-honored American tradition that predates the very existence of our country,” the Action Alert states. “From the Boston Tea Party to the Montgomery Bus Boycott to the boycott of South African goods in protest of apartheid, Americans have a proud history of participating in boycotts to advocate for human rights abroad.”

Individual Members of Congress can be contacted by clicking here.

The Office of Public Witness said that the alert was provided by its partners at Churches for Middle East Peace.